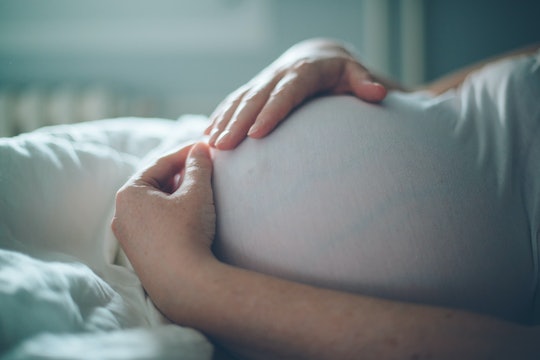 It's difficult to adequately describe pregnancy to those who haven't experienced it. I mean, I could talk about the various pregnancy symptoms I experienced, how my mental health suffered, and how amazing it was to wrap my head around the idea that I was literally growing another human being inside my body, but somehow my descriptions fail to do the entire experience justice. Still, there are so many things pregnant women want women who are TTC to know, even if our words fall a little short.

I know it can feel like there's this invisible barrier between pregnant women and women trying to get pregnant, but I believe we have much more in common than people think. For example, I know how stressful it is to try to conceive. I know that trying to get pregnant isn't always the "fun part." I know the anxiety that often comes with trying to track your fluctuating cycle, and the awkwardness of scheduling sex, and the seemingly endless amount of waiting. In fact, as a woman who was previously trying to conceive I was constantly waiting to ovulate, waiting to have sex, and waiting to pee on a pregnancy test. I was waiting for tests, for the "perfect window," and for results.

Your attempts at trying to get pregnant might not go according to plan or be perfect, but here's a not-so-secret fact for you: pregnancy won't go according to plan or be perfect, either. So while it seems like something massive is dividing us — pregnancy — I'm here to tell you that we're more alike than you think. In fact, here are a few other things pregnant women want women who are trying to conceive to know:

More Like This
My Fertility Journey Began In A Cold Doctor’s Office, But It Was Also Weirdly Romantic
Yes, It’s Possible To Get Pregnant If You Have An IUD
14 Free, Printable Birth Plan Templates For Every Kind Of Delivery
40 Fantastical Boy Names That Start With “F”