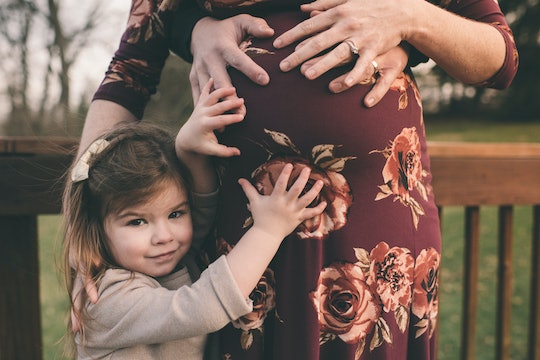 Pregnancy Can Be So Intrusive & It's Time We Talk About It

I used to be kind of shy about my body... until I had babies. Now, I pretty much let everything all hang out — sometimes literally. When someone walks in on me in a changing room, or I accidentally flash the neighbors, I simply laugh. It's not really funny, though, especially when you think about how this transformation happened, and at a time when I was at my most vulnerable. The truth is, pregnancy can be so intrusive, and in ways that I didn't expect and, in the end, have changed me completely.

It's all started before I even knew I was pregnant. I was buying pregnancy tests at a local store and the clerk said, "Have fun peeing on that stick." I cheerfully responded, "I will," but at the same time I felt like an embarrassed teenager buying condoms or Plan B. I mean, yes, that's literally what I was going to do, but I didn't want a stranger knowing that I might be pregnant, and I definitely didn't want them to joke about it.

Pregnancy is complicated. I didn't know how I felt about my potential pregnancy, and didn't want to talk about it with anyone. I'm pretty sure that if cisgender men could get pregnant, there would be a pregnancy testing app that allows people complete privacy when they're coming face to face with their reproductive status. At a minimum there would be a test that didn't involve peeing on your hand or discussing your reproductive choices in the check-out lane with a teenager making minimum wage.

Unfortunately, pregnant people are forced to have these kind of conversations all the time, and with or without their consent. That day, I went home and peed on all three pregnancy tests in the package (and my hand, in case you were wondering). All three were positive, and I felt the spectrum of emotions from happy to terrified... all at the same time.

I wanted my baby to be healthy, even if it meant strangers seeing the inner-workings of my reproductive system, but the entire process was intrusive... and little by little I started to feel like my body was no longer my own.

After I washed my hands, I called to set up my first prenatal appointment. The receptionist asked, "What was the first day of your last period?" I literally worked for a women's health care provider at the time, and I still stumbled over my words when trying to answer that question when it was asked by a stranger. I mean, I know why they ask — to determine your future baby's due date — but still, it felt so weird to have to talk about two bodily fluids with two strangers in one day.

Not too long after I went to my first prenatal appointment. When the midwife told me they were going to do an ultrasound to check on my fetus, I pulled my shirt up and started to lean back on the table. She chuckled and said, "No, I mean a transvaginal ultrasound." I laughed nervously, collected myself, and eventually asked, "You're going to put what, where?"

She gave me some "privacy" so I could change into a gown, which was hilarious considering that I was also going to have a breast exam, a pelvic exam, a Pap smear. Then the midwife stuck a condom-clad wand into my vagina to take live action shots of my fetus, ovaries, and uterus. Like all moms-to-be, I wanted my baby to be healthy, even if it meant strangers seeing the inner-workings of my reproductive system, but the entire process was intrusive... and little by little I started to feel like my body was no longer my own.

As a sexual assault survivor and a really private person, the entire process was triggering.

Those first few weeks of pregnant life, of course, were just a precursor for what was to come. I had 30 weeks (give or take) of prenatal exams and tests — all designed with my health and my baby's health in min — that were so intrusive. Every appointment I had to pee in a cup, get weighed, have blood pressure checks, and have really personal discussions about my medical history and pregnancy symptoms.

I had to have blood draws, HIV and STI tests (which I didn't even know they were doing at the time), a glucose test for gestational diabetes, and ultrasounds. I was measured, poked, and people pressed on my belly, listened to my baby, examined my cervix, massaged my perineum, and swept my membranes. I'm not saying these things aren't important, because they totally are, but I can't pretend they aren't invasive. As a sexual assault survivor and a really private person, the entire process was triggering.

Once I started showing, people would share their views about everything from my diet and exercise regime to how I should give birth.

Then came childbirth, which was one of the most vulnerable experiences of my life. I mean, I knew that childbirth was going to involve at least a couple of strangers seeing my vulva, but it was so much worse than I expected. The entirety of it all was so much to take in. In fact, it was traumatic.

It wasn't just health care providers who were intrusive, though. It seems like everyone who found out I was pregnant had an opinion about it. Of course my friends and family wanted to celebrate my pregnancy, but they also wanted to know how much my boobs had grown, if I had morning sickness, and if I planned to get an epidural. I know they asked because they cared, but they also asked assuming I would answer. My body felt like it was up for discussion at all times, and it made it much more difficult to feel like myself while simultaneously experiencing so much change.

Strangers were the worst, though. Once I started showing, people would share their views about everything from my diet and exercise regime to how I should give birth. I had people ask me how far along I was, and then argue with me about because I was "huge," "about to pop," "all belly," or surely having twins.

They wanted to know how many children I already had (too many), how old I was (too old), and even my my baby's sex and name (none of their business). I even had strangers ask me if I had lost my mucus plug, if my cervix was dilated, and how much weight I had gained. They also touched me, often without my permission, as if my body was some kind of walking petting zoo. It made me feel so inhuman.

Pregnant people are not vessels, we are human beings, and we have a right to our very valid feelings about and desire for privacy during pregnancy and childbirth.

It was almost as if pregnant me was no longer a person with a right to privacy, dignity, or respect. Instead, I was more like a fetus carrying case, who was seemingly always doing something wrong from someone else's perspective. For example, when I was pregnant with my second child, I was in a car accident. Not only did the doctors refuse to give me pain medicine, but the nurse had the nerve to say, "You are not our most important patient," referring to the fetus inside my body. It was absolutely demoralizing.

I think it's time we started talking about intrusive pregnancy is. Pregnant people are not vessels, we are human beings, and we have a right to our very valid feelings about and desire for privacy during pregnancy and childbirth.

And while prenatal care is super important, it's also important that we acknowledge how intrusive it is, so at least people will know what to expect. And maybe, just maybe, we can find ways to make it less invasive, which would be amazing for moms and babies, so everyone can start seeing moms-to-be as people, and not just pregnancies.