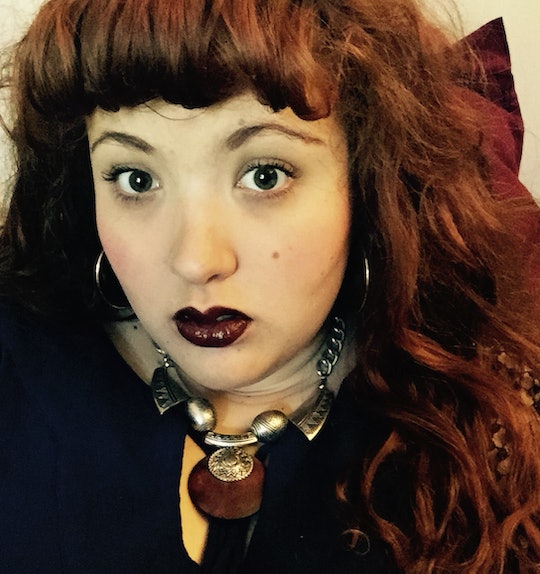 Honestly, The Stigma Of Not Knowing I Was Pregnant Made Me Feel Like An Unfit Parent

I'm sitting in the 6-foot by 4-foot sonogram room of a walk-in gynecology clinic in New York City. My body is taking up most of the space in the cubby while my partner, Patrick, hunches in a corner and the technician squirts some cold gel onto my stomach. She begins looking for signs of life, and I'm expecting to hear something like, "You're about a month along." I didn't know I was pregnant until two days before, when a digital home test told me I was at least three weeks in.

I can't see the screen, but I see my partner's eyes widen suddenly as some sort of picture becomes clear.

"So it's looking like you're just over 20 weeks," the technician tells us. She shows me the image that shocked Patrick moments before. Suddenly there's a head in front of my eyes — something that looks, to me, far more like a baby than the splotchy embryo I expected. There's even a hand, equipped with fully formed fingers, that seems to be waving at us like, "Hey guys, long time no see. Thanks for finally finding me."

Our technician is apparently oblivious to the myriad emotions coursing through both our veins at that moment. Only seconds after unveiling the news, she asks whether we'd like to know the sex. In five minutes, we've gone from thinking I'm housing a fertilized egg to realizing there's been something living inside me for five months, to being told that the thing is a little girl.

The whole day was surreal. So were the following days. So was the process of making the big decision. So, too, have been the last 10 weeks. Most people who decide to have a kid have about nine-plus months to figure out their sh*t. Half our prep time had been erased. We have 20 weeks to figure out ours.

The past two months since we found out have been full of surprise after surprise; transition after transition. But with the exception of the initial day I learned about my unborn child, there's been no shock more tangible than the stigma I've encountered for not knowing about my pregnancy sooner. The nurses at that first walk-in clinic were kind: They had once met a woman whose pregnancy went undetected for eight months. "Don't worry, we've seen it all," one told me. But to a lot of other people, the fact that I didn't know was a sign of carelessness. It was ridiculous.

There are plenty of reasons I didn't realize I was pregnant. None of them warrant justification, but I'll explain anyway just to offer the full picture. At 14, I was diagnosed with such severe Polycystic Ovarian Syndrome that doctors didn't believe I'd ever be able to conceive unless my plus-size self lost about half of my body weight and underwent several rounds of expensive fertility treatment. And maybe not even then. Additionally, my PCOS means I very rarely get a period.

"How could you not know, though?" the same receptionist asked. "That's absurd."

At the time of conception, I was also on birth control. I'd switched pills shortly before getting pregnant, and have since been told that it's possible the new one didn't take in time. This, apparently, is why doctors are meant to advise you to use extra protection after changing your pill. Mine didn't do that, so I didn't think to purchase some condoms.

I'm also happily fat. My weight fluctuates often, but I am never not plus size. Although I gained a few pounds in those first 20 weeks of pregnancy, they didn't really show. In fact, nothing about my body changed much. I only threw up twice that whole time, and both were after dinners out at new restaurants. Sure, I was exhausted come like, 8 p.m. every evening, but I attributed this to my daily commute into the city and to a solid amount of hard work.

The only reason I took a home test in the first place is because I woke up that morning — literally 20 weeks into pregnancy — and noticed that my areolas were a different color. If the change in hue was a progression, it wasn't one I noticed until that moment. I figured, "Well, I'll take a test just to rule it out."

I called about five more gynecologists on my insurance, only to be greeted with similar reactions and to be told that they couldn't take me so far along into pregnancy. If something was wrong with the baby, they didn't want to be liable. They didn't want their names associated with any "potential issues" for me and my baby.

Since the walk-in clinic I went to didn't specialize in further prenatal care, they recommended I get myself on an over-the-counter vitamin and call my regular doctor to book the soonest appointment possible. So I did. "Oh, we don't take anyone over 12 weeks," the receptionist told me. "There's just too much risk."

I quickly explained that I didn't know — that I had to see my regular OB-GYN; that "I'm sure she would take me."

"How could you not know, though?" the same receptionist asked. "That's absurd."

Absurd. I felt a compulsion to walk her through my medical history, but it didn't seem to matter. "It's just that, from my experience, a woman knows," she told me after. I hung up the phone. Then I called about five more gynecologists on my insurance, only to be greeted with similar reactions and to be told that they couldn't take me so far along into pregnancy. If something was wrong with the baby, they didn't want to be liable. They didn't want their names associated with any "potential issues" for me and my baby. From the medical world, the stigma felt so real that I couldn't even get proper care. Reputations seemed more important than the whole "first do no harm" thing.

I kept hearing that "women just know," and that it was "so odd" and "so unfortunate" that I didn't.

Eventually, my stepmother's OB-GYN took me in. I don't know if he would've had there not been a family connection, but I also don't particularly care. At least there was someone willing to help.

It wasn't just the medical community that seemed to think 20 weeks was an "absurd" amount of time not to know, though. The more people I told — the more people my parents told — the more who seemed downright disturbed. I kept hearing that "women just know," and that it was "so odd" and "so unfortunate" that I didn't.

I've doubted myself a lot throughout these two months. I've wondered if I really am lacking in some kind of maternal instinct. I've questioned how I can possibly be in tune to my daughter's needs once she's here if I wasn't in tune enough to her needs to be cognizant of her existence. The word "neglect" has been thrown at me a few times, in that half-joking, half-serious kind of way by people who don't want to seem judgmental but very clearly are. But if that's what I did — if I neglected her — how do I stop myself from ever doing it again?

Every test we took in the weeks following the reveal thankfully came back OK. There's been no hint that anything is wrong with our baby, despite the lack of prenatal care in the first 20 weeks of my pregnancy. I did drink. I did smoke. I didn't take any vitamins. But I've been reassured again and again that she is OK. However, this still isn't enough for everyone. I can feel their concern and doubts — the silent (and sometimes not-so-silent) suspicions that I've harmed my daughter and that I'm already failing at parenting. It doesn't matter that we've done everything we can in the last two months to ensure her wellbeing. All that matters is that "things got off to a bad start, didn't they?"

I've doubted myself a lot throughout these two months. I've wondered if I really am lacking in some kind of maternal instinct. I've questioned how I can possibly be in tune to my daughter's needs once she's here if I wasn't in tune enough to her needs to be cognizant of her existence. The word "neglect" has been thrown at me a few times, in that half-joking, half-serious kind of way by people who don't want to seem judgmental but very clearly are. But if that's what I did — if I neglected her — how do I stop myself from ever doing it again?

When I went in for my anatomic ultrasound at about 21 weeks, the technician there told me how lucky I was. She said that if I hadn't found out when I did, I would've learned about my pregnancy through the start of kicks and noticeable movements inside my stomach in the coming weeks. I relayed this anecdote to my editor the following day and she said something like, "You know, if that had happened to me, my first thought would honestly be 'alien.'" And I wondered if mine would've been as well. When you spend over 10 years thinking pregnancy isn't in your cards, the thought of it happening isn't really on your radar when potential symptoms pop up. It's not actually neglect. It's just a byproduct of, in my case, a few substantial medical misdiagnoses and a very fortunate, sickness-free first two trimesters.

Even though there have been moments of extreme doubt, my editor's words that day were a reassurance. Here was another self-identified woman recognizing that her first instinct upon feeling something kicking her belly wouldn't be "holy baby," but "extraterrestrial entity." This is because there is no right way to be a woman, much like there is no right way to be a mother or parent. There is no formula. There is no neatly package-able set of rules. And the same goes for being a pregnant person.

Although I'm far from the first human to not know about their pregnancy until quite far into it (and I certainly won't be the last), I don't believe that any two people experience these 40 (or more, or less) weeks in the same way. Our bodies are so intricately different from one another, and that's something I'm normally quite grateful for, and in awe of.

Despite many suggestions of poor pre-parenting and failed womanhood, not knowing that I was pregnant does not correlate to being careless or unfit to do this. I've done everything I can to take care of myself and my baby since finding out. It just means that, sometimes, life throws the unexpected your way. And that's ultimately part of the fun.

More Like This
Are Movie Theaters Too Loud For Pregnant People? OB-GYNs Explain
Everything You Need To Know About Postpartum Blood Clots
All Your Questions About Getting Pregnant After A Tummy Tuck Answered
All The Reasons Why You Might Have A C-Section