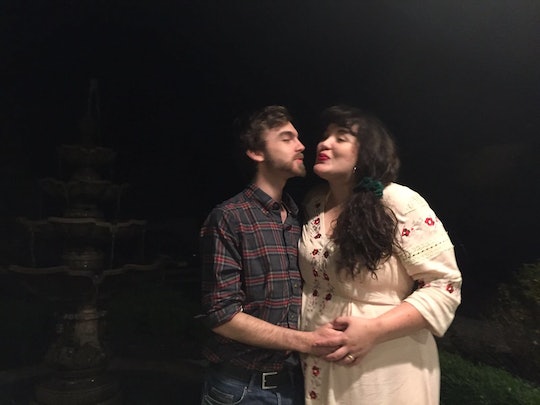 I was 14 when I was diagnosed with Polycystic Ovarian Syndrome. I was also 14 when I was told that getting pregnant with PCOS was totally out of the question. There were no "what ifs," no "maybes." I was given a definitive no: A no based only on the existence of the condition, and on the fact that my BMI was above 30.

Although my fertility was never tested beyond the ultrasound that proved I had cyst-infested ovaries, the no was so resounding that my young adolescent self never thought to ask more questions. I forced myself to accept the fact that despite already loving kids, they just weren't for me. Maybe I would someday adopt. Maybe I'd grow up to be a fat incarnation of Samantha Jones. Maybe it wouldn't be so bad.

Fast forwarding the clock a little over 10 years, I was 25 when I found out I was pregnant. I was 20 weeks pregnant, in fact. Because my PCOS means that I very rarely get a period, I had no reason to suspect the absence of Aunt Flo in those five months. Although already plus size, I had experienced no weight gain. My intestines hadn't been trying to climb their way out of my throat. And I'd been told I would never conceive. I'd been told that because I am fat and I have PCOS, conception would never happen. That is, until it did.

At the time, I wasn't even trying to get pregnant. I'd been on birth control when it happened (albeit a new pill that my doctor has since told me probably didn't take). But then I started finding something out: Like me, there are a lot of fat women out there with cystic ovaries who manage to have children — even after their doctors have told them it's more unlikely than intergalactic space travel. ‌

Dr. Jennifer Caudle, Family Physician and Assistant Professor at Rowan University School of Osteopathic Medicine, tells Romper over email that PCOS is considered one of the most common causes of female infertility. "If a woman is overweight, weight loss often helps [conception]," she tells me. "Medications may be used to help ovulation" as well.

Women with PCOS are known to have higher levels of male hormones, according to WebMD. Because of this, they can experience thicker body hair growth, acne breakouts, and irregular periods. The latter can interfere with conception. Because women with PCOS are often insulin-resistant as well, according to WebMD, meaning their bloodstreams cannot correctly process sugar and insulin and instead build them up, weight gain will often result (the extra male hormones play into this, too). And so, most medical logic I've encountered or been presented with typically suggests that losing weight will reduce many PCOS symptoms, and will subsequently help conception (even if it's often the PCOS that causes weight gain in the first place, and not the other way around). ‌

After finding out I was pregnant, one of the first things I did was what many 20-something internet writers do when faced with a new conundrum: I took to social media to find people who might be able to relate. I joined the Fat Positive PCOS Resource & Support Group on Facebook, along with Plus Size Mommy Memoirs, the latter run by PlusSizeBirth.com founder Jennifer Rue McLellan. My gut was telling me that PCOS wasn't the automatic infertility sentence so often thrown upon fat women with the condition. It was telling me that many (if not all) of the doctors I spoke to throughout adolescence and young adulthood who either told me, "you'll have to lose a lot of weight if you ever want a baby and then go through very expensive fertility treatments," or "you'll never have kids at all," might have been operating under pure, unadulterated fatphobia. The kind of sizeism proven to affect the medical community at large. The kind of sizeism that favors encouraging weight loss before getting to the root of an actual problem.

In conversation with Max Carter-Bee, a 29-year-old single mom who runs the baby blog Adventures Of Max And Jackson, she tells Romper that she was diagnosed with PCOS at age 18, only to conceive 10 years later:

The doctors told me I would have only a very small chance of conceiving if at all, mostly due to the PCOS, though [they] pointed the finger firmly at my weight being the biggest issue to contend with. Every time I look at my little boy, it's like a giant middle finger to every doctor who ever told me it was never going to happen. To the nutritionist who made me feel like a fat failure for not being able to lose weight with dirty looks and snide remarks. ‌

Unfortunately, Carter-Bee is doubtful that sizeism will ever cease to be an issue within the medical community, noting that most conversations fat people have with doctors relating to their ailments of any kind will include the, "Have you tried losing the weight?" question. The truth is, she's far from the only plus size individual with PCOS who's proven the medical community wrong.

A member of the Fat Positive PCOS Facebook group I joined, who wishes to remain anonymous, commented on a post I shared, telling me:

I was told four years ago when I was diagnosed [with PCOS] that it would be very difficult to conceive. Well, I had sex once with a nice guy and BAM, preggers [...] I want to be clear that we only had sex one time.

Tyne Harquail, a member of the Plus Size Mommy Memoirs Facebook group, tells Romper, "I was told at 17 that [conception] would be a no go thanks to PCOS. At 26, I conceived naturally after a visit from my boyfriend." They weren't trying. It "just randomly happened." ‌

Like myself, many of the people I spoke to were told they were infertile simply for having PCOS and being fat. None of them were asked to undergo proper female fertility testing, which can include ovulation testing, ovarian reserve testing, or a hysterosalpingography, as outlined by the Mayo Clinic.

Finding out you're pregnant is a shock to every inch of the system, regardless of the circumstances at play. But finding out I was pregnant when I'd been told for so long that it would never happen shook my psyche and made me reevaluate every child-free-existence plan I'd laid out for myself.

It's not to say that conceiving while having PCOS, regardless of your size, is always a walk in the park (or even always possible). Many individuals I spoke to via Plus Size Mommy Memoirs struggled immensely. Some had miscarriages, others needed to splurge on IVF treatment, others tried for six-to-10 years before finally getting pregnant. There's a reason PCOS is considered one of the highest causes of infertility, even if the infertility diagnosis is sometimes premature.

However, if there's anything my surprise pregnancy has reminded me of, it's that weight loss is not always a requirement to fulfilled health or, in this case, fertility. If your doctors flippantly write down your weight alongside a few photos of your cystic ovaries and proceed to tell you that you are infertile, you should feel free to ask them more questions. Ask them for proper fertility testing. Ask them why. Ask them whether they are aware that fat women with PCOS who conceive and have happy, healthy children are everywhere. Ask them how they could possibly know that you are infertile based on BMI and little else. Ask them if this is how they would treat Daisy Ridley, or any straight size patient with PCOS, should they walk into their door.

Statistics have proven that many doctors maintain biases against their "overweight" patients, according to a report from the University of Washington published in the journal PLOS ONE that surveyed the anti-fat bias for almost 400,000 people. Healthcare has been denied to individuals whose BMI category is "obese," even if they demonstrate no physical ailments, according to the International Journal of Health Policy and Management. Patients have been denied treatment for being fat. Diagnoses, including ones as serious as cancer, have been missed. Instead, doctors have told their plus size patients to consider dropping the pounds.

Some doctors get it wrong sometimes — a lot of the time, in fact. I wouldn't be 28 weeks pregnant if they didn't. But sometimes it's easy to forget this. We don't live in a world that's moved past its fatantagonistic tendencies, though. We don't live in a world that culturally connotes fatness to anything beyond undesirable, unhealthy, or wrong. But to forget that the medical community is not exempt from these prejudices is incredibly dangerous. It can lead to not getting the care you need. It can lead to spending much of your life convincing yourself that you don't want kids, just because someone looked at your waist size and decided that you couldn't have 'em. It can lead to feeling like a failure, even if the only thing you've done wrong is trust that every care provider you encounter will always have your best interests at heart.

Finding out you're pregnant is a shock to every inch of the system, regardless of the circumstances at play. But finding out I was pregnant when I'd been told for so long that it would never happen shook my psyche and made me reevaluate every child-free-existence plan I'd laid out for myself. And to then find out that there are online communities filled with women whose experiences so mirror mine was equal parts infuriating and comforting. On the one hand, I'm angry at the fact that being fat can still often translate to being "broken" in the eyes of culture and doctors alike. Because whether we can or cannot have kids, we are not broken. On the other hand, the discovery makes me hopeful for many of my fellow fat, cystic babes who've given up dreams of having kids because they've been told they should. The simple truth is that a higher weight in combination with PCOS does not always make you infertile — and you have every right to ask your care provider for more information, more tests, and more reasoning behind your alleged infertility, other than your BMI.