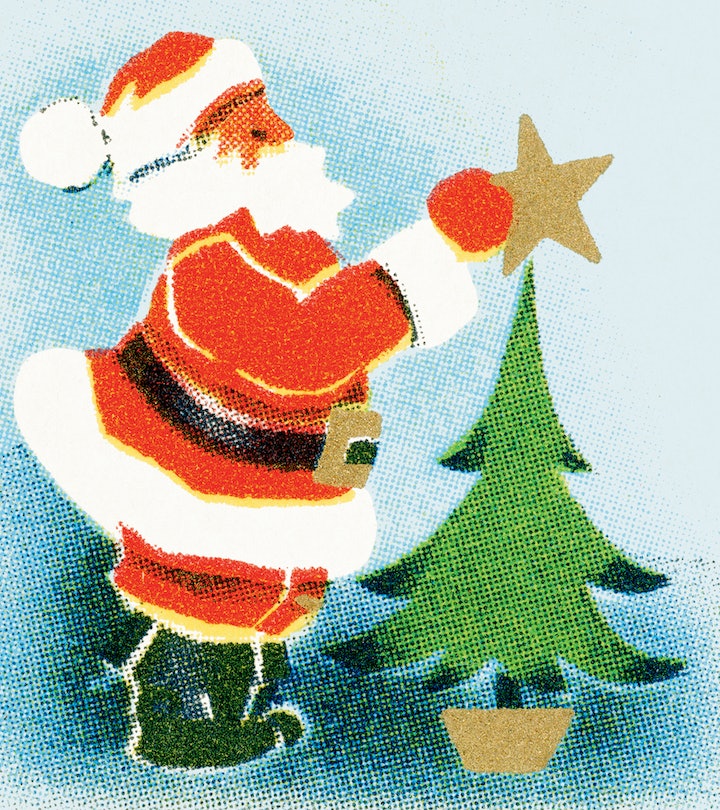 How Tall Is Santa Claus? Old Saint Nick Has Some Height to Him

He’s not tiny, but he’s not a giant either.

As the Christmas season approaches, images and IRL versions of Santa Claus will start appearing in just about every window display and on every street corner. In seeing so many different Old Saint Nicks, your child may start to inquire about his appearances to suss out the real man in red from the phonies (or, as you may explain, the proxies). They might ask about his height, weight, and even hair color. You can explain not knowing his weight (that’s private information, afterall) and his hair is an obvious white hue given his age, but your child may be adamant about knowing Santa’s height. Fortunately, if your child won’t stop asking “how tall is Santa Claus,” there is some pretty solid research on the topic so you can answer with confidence.

Of course, kids are curious by nature and may not accept your answer no matter how much evidence you provide. They may argue that their best friend’s parents said something totally different, or that your answer doesn’t match what they’ve seen. And that’s OK. You can explain the differences away with the simple concept that Santa is a magical being and may change his size to fit into a chimney or to avoid the paparazzi. And if they still don’t let up, well you may just have a future investigator on your hands.

How Tall Is Santa Claus?

Although there is a lot of information about Santa Claus’s height, it isn’t all the same. According to the site Yes, Santa Is Real, Santa Claus is 6 feet 6 inches tall — that’s a mere inch taller than olympian Usain Bolt and actor Dwayne “The Rock” Johnson.

Other websites have Saint Nick standing at a slightly lower stature. Both NORAD Santa and DreShare clock Santa’s height at 5 feet 7 inches tall. To help paint a picture, that’s the same height as actors James McAvoy and Mark Hamil (which, I suppose, lets us know that Santa is a little too short to be a Stormtrooper.)

If you want to split the difference between the two heights, you could go with Dimensions.com, which states Santa Claus is 6 feet tall.

Probably not the definitive answer you (or, more specifically, your child) was looking for. But, again, you can use magic and the shape-shifting elements of Santa Claus’ job to explain why his height may be a topic of controversy.

How Tall Are Mrs. Claus & Elves?

While your child is checking in on Saint Nick’s dimensions, they may also inquire about the heights of the other North Pole residents. And, fortunately, some research has been done on this topic too.

According to Dimensions.com, Mrs. Claus is 5 feet 5 inches tall. If Santa is 6 feet tall, then this is a fairly complimentary height. Just picture it: Him resting his chin perfectly on her head as she wraps him in a warm embrace following a night of gift giving. It’s such a cute image, you can almost hear the Grinch’s heart growing three sizes.

How Tall Are Santa’s Elves

Everyone knows that Santa’s elves are smaller than the average adult, but by just how much? According to How Stuff Works and Dimensions.com, Santa’s elves average at 3 feet tall.

Of course, there are exceptions to the rule. Buddy the Elf, for example, is 6 feet 3 inches tall. (Though — spoiler alert — Buddy is not an elf by birth. He became one after crawling into Santa’s sack and being adopted by Papa Elf upon arriving in the North Pole.)

Then there’s Ralph, the world’s tallest elf. According to a 2018 profile in Vail Daily, Ralph is 6 feet 3 inches tall and oversees all elves at the North Pole. But, apparently, he wasn’t always so tall.

“I used to be a normal sized elf,” Ralph told Vail Daily. “But one night Santa was working on growing pills in the workshop. They looked a lot like peanut butter M&M’s, and I just couldn’t control myself!”

So there are two lessons to learn from Ralph. First, don’t eat food that’s just lying around. Second, height doesn’t matter as much as heart when it comes to working for Santa Claus.

More Like This
Try These Beautiful DIY Valentine's Day Nail Designs
The Best Heart Nail Designs For Valentine’s Day
Valentine’s Day Photoshoot Ideas For Your Little Cupid
When Do We Spring Forward In 2023? Mark Your Calendars
What Parents Are Talking About — Delivered Straight To Your Inbox