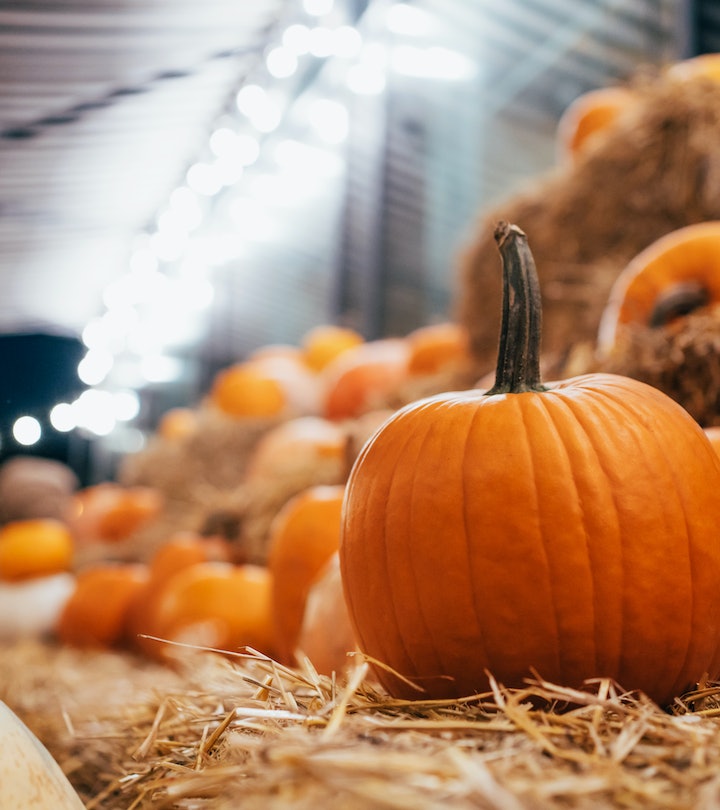 8 Ways To Dispose Of Pumpkins After Halloween

Think beyond the garbage can.

It simply wouldn’t be Halloween without jack-o’-lanterns and afternoon strolls around pumpkin patches with the fam. No matter how gross it feels to dig out those seedy pumpkin innards or how difficult it can be to carve the perfect ghoulish grin in its rind, a glowing jack-o’-lantern (or three) on the front porch or windowsill is worth all the effort. But what are you supposed to do with it once November hits? If you don’t know exactly how to dispose of pumpkins after Halloween, you’re definitely not alone.

More than one billion pounds of pumpkins get thrown away and left to rot in U.S. dumps each year, which contributes to the 35.3 million tons of annual food waste that ends up in landfills, according to data from the EPA. The Office of Energy Efficiency & Renewable Energy warns that, when left to decompose in a landfill, your seasonal Halloween pumpkins become known as municipal solid waste, which then turns into methane — a greenhouse gas that contributes to climate change by producing more than 20 times the warming effect of carbon dioxide.

Turns out, though, you don't have to throw your jack-o’-lantern in the trash after Halloween. If you want to be a little more green, knowing how to dispose of pumpkins after Halloween will spark plenty of sustainable and creative ideas to recycle your gourd. When the candy is all gone and you go to toss the carved or uncarved pumpkins that you’ve been proudly displaying all October long, think twice before you simply throw them in the garbage can. Instead, here’s how you can save your pumpkin from the dump.

What do you do with old pumpkins?

If the pumpkin you want to get rid of is uncarved, you have plenty of options to use the inside of it in delicious pumpkin recipes or DIY projects. If you have carved pumpkins, fret not — there are options here for you, too.

If your pumpkin is rotting, opt for just throwing it in your compost bin. Any sign of mold indicates that your pumpkin should be composted rather than repurposed, and the mold may be harmful to animals or plants if left outside in a garden. Additionally, if you painted your pumpkin, don’t give it to animals or use it in any recipes, as paint can be toxic if ingested. And for composting, make sure to remove any candles, decorations, and painted areas on the gourd first.

Can you throw pumpkins in the woods?

Since pumpkins are biodegradable and you can dispose of them in your own backyard, you may think tossing your aging pumpkin into the woods is a similarly good idea. However, that largely isn’t the case. In fact, many wildlife and plant experts advise citizens against just throwing their old Halloween and Thanksgiving pumpkins in the woods.

For one, pumpkins are known to smother native plants and create their own microhabitats that might harm anything else growing there, according to horticulture, environment, and energy experts at University of Illinois Extension. Especially if the pumpkin is rotting or was exposed to toxins from paint or candles, you don’t want to leave it out for wildlife to munch on, as it can spread disease and harm the animals. Overall, there isn’t much harm in placing one or two gourds in your yard for wildlife to snack on or incorporating pumpkins into your own garden’s soil, but contributing to a mass disposal of pumpkins into the wild can potentially mess up the local biosystem — and no one wants that. It’s best to play it safe and not just throw all of your Halloween pumpkins away in the woods.

If your pumpkin is in good condition for use outside of composting, here’s a list ideas for how to recycle or reuse your pumpkin — rather than throw it away — after Halloween.

As long as you’re checking for rot and mold on your pumpkin first, it’s totally fine to give the gourd a second life. Minimize waste and have a little fun in the process. Who said a pumpkin’s only role is to sit on the porch?

This article was originally published on November 15, 2017