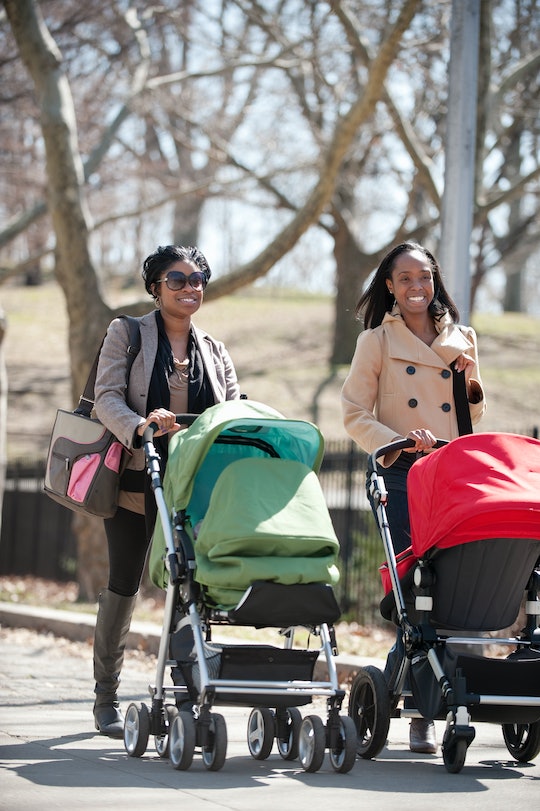 Because you need them now more than ever — even if you have less time than before.

There are plenty of obviously tough things about becoming a parent: losing sleep on a daily basis, stressing over your child constantly, and having to spend most of your money on diapers and toys. But it’s not often that people talk about how having children can affect your friendships. When your priorities and schedule suddenly change, it can be hard to adjust the other relationships in your life. Oftentimes, maintaining friendships means learning how to set boundaries with friends so that your two worlds can mesh nicely instead of clashing.

I remember this so much from when my daughter was first born. Before she arrived, I was adamant about not changing anything about my friendships and social schedule, but once she was in the world, I knew everything was going to be different. Learning how to juggle friends and my daughter, while also trying to find myself in motherhood, wasn’t easy. Whether it was close friends giving unsolicited advice that only annoyed me, or childless friends not quite understanding my new priorities, it felt like I was constantly disappointing someone.

I know that I’m not the only parent who has ever felt that way — and, again, this is why setting boundaries is so important. To learn how to make things work for everyone so that no precious friendships get lost, I spoke to therapists for insight.

Use “I” Statements When You Disagree About Something

It’s not unusual to be friends with someone who believes in a different parenting style than you do, and you’ll quickly learn that, when it comes to parenting, some people have no problem telling you they think you’re doing something wrong. This is especially true for close friends, who feel like they have the right to speak up or tease you about your parenting style precisely because you guys are so close.

This kind of disagreement can lead to tension, and boundaries need to be set quickly. Licensed clinical social worker Danica Copp tells Romper that in this case, using “I” statements is a good idea. “Use ‘I’ statements and talk about your own feelings instead of the ‘you’ statements, which cause defensiveness,” she says. When a friend says something that is bothering you, she recommends saying something like, “I appreciate that you are trying to be helpful with your advice and I know you care about me. I am struggling with our parenting differences and would prefer to stick to more neutral topics like activities we share or enjoy.”

Make Time For Them Without Compromising Yourself

One of the hardest things about maintaining friendships as a parent is actually being able to make time for your friends. Friends with children and without can quickly start to feel neglected and frustrated if you’re never around, even if it’s because of the valid excuse that you need to make your child your first priority. Dr. Carissa Coulston, relationship expert at The Eternity Rose, tells Romper that in these cases it’s important to be honest, firm, and understanding.

If you notice that you’re missing out on a lot of plans and they seem to be getting annoyed, Dr. Coulston says to have to a frank discussion with them. “Explain that you still care about them and will always be there when they need you, but that you simply can’t party the way you used to,” she says. You can also express that things may need to change a bit. “Let them know that you’re still happy to do those things, but they need to be planned in advance,” Dr. Coulston says. She recommends setting up a schedule of regular “dates” so that it’s easier to get together.

You can also ask if they mind if you bring the kids around so that you can hang out. “Make sure that your friend knows that you’re happy to spend time with them, but your little ones are part of the picture now and that’s a compromise you’ll both have to make,” Dr. Coulston says.

Avoid Placing Blame When Something Is Wrong

When something negative is going on in the friendship, it’s tempting to sweep it under the rug, act like it’s not happening, and wait for it to pass. But this isn’t going to help anyone. Instead, confronting your friend is the way to go, and you can do that without starting an argument.

Dr. Coulston says to avoid placing blame, even if you feel very strongly that the negativity is your friend’s fault. “If you insinuate that the entire situation is their problem, you’re going to cause a rift,” she says. “Instead, you need to address the issue while showing support. Acknowledging the situation in a question format is often a good solution. You’re showing your friend that things aren’t OK, but you’re not blaming them for it. Something like, ‘is there anything I can do to help you with...?’ could be the opening you’re looking for.”

Suggest Outside Help When Things Are Getting Too Tough

I was once in a friendship where I was treated like my friend’s therapist. They never asked about me, or if they did, they barely listened to my responses before telling me about their own problems for hours on end. It was emotionally exhausting, and even though I wanted to be there for them, I couldn’t continue to be in such a one-sided relationship — especially when I was already in charge of a child!

When this happens, Copp recommends being totally honest. First, validate their feelings and struggles so they don’t feel dismissed. “Suggest that you are worried about this friend and want them to have the support and encouragement that they need from a professional,” she says. “I also think with a good friend, be honest that you are struggling with your own adjustment to parenting.” She suggests saying something like, “I appreciate your friendship and value you. Right now I can’t be available to you in the way you seem to need.”

Clearly Communicate Your Expectations Through Words And Actions

Making new friends is a great part of being a mom. But what if they want to become best friends who see each other every single day, and you’re just not ready? When I first had my daughter, a new mom friend of mine spent months asking me to take a walk every day, and I jut didn’t have the time or emotional bandwidth. Dr. Coulston says that when something like this happens, you need to make the relationship clear from the start.

“Keep things neutral from the get-go,” she says. “Be polite, be friendly, be welcoming, but don’t go overboard. Don’t respond to messages from them instantly. Switch your phone off after a certain time so they can’t access you 24/7. Don’t agree to meet up every time that they ask you to.” She adds that you shouldn’t be afraid to say no sometimes. “As long as you’re polite and don’t deliberately go out of your way to offend the other party, it shouldn’t cause any problems.”

Whether you and your friend strongly disagree on politics, religion, or how children should be raised, it can be something that causes arguments. While it’s important to stand up for your beliefs, sometimes, in a friendship, the best thing to do is to agree to disagree. Dr. Coulston notes that it’s OK to have different opinions.

“However, if you find that your conversation is heading south and feelings could get hurt, don’t be afraid to shut the topic down,” she says. “Say something like, ‘I understand your point, but I think our opinions are just different on this subject,’ or ‘let’s avoid this topic and talk about something else.’” As Dr. Coulston notes, a good friend will understand and respect your wishes.

At the end of the day, setting boundaries with your friends is about being honest and open to communication. It’s also about saying no respectfully and kindly while also making an effort to make time for friends when you can. And remember that this can take time. “Setting boundaries is a learning process,” Copp says. “If you have never been good at it, it takes practice.” Give yourself time and keep it up to notice a change.