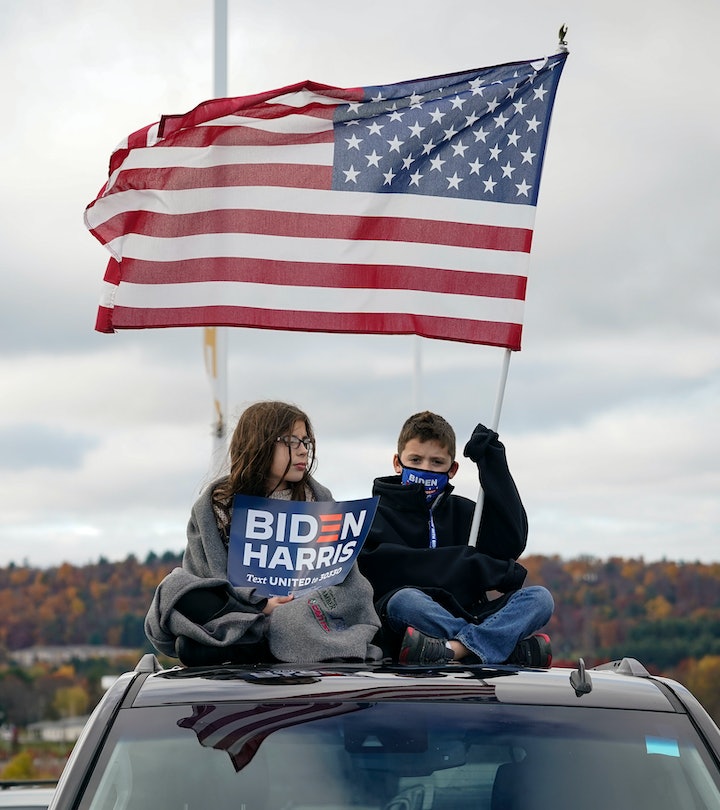 ATTN Parents: Kids Can Watch Their Own Educational Livestream On Inauguration Day

This will be the first year the Presidential Inaugural Committee hosts a livestream just for kids during the Inaugural Ceremonies.

While the inauguration of President-elect Joe Biden and Vice President-elect Kamala Harris is sure to be historic — Harris is both the first woman and the first woman of color to be elected vice president — the Presidential Inaugural Committee is also hoping the day will unite Americans of all ages. But let's face it, official ceremonies can be a bit of a bore for younger viewers. That's why the Presidential Inaugural Committee will, for the first time ever, host a special Inauguration Day livestream just for kids.

More Like This
Apple Card Family: How It Works & What Your Kids Can Learn
Here's Everything We Know About 'Paw Patrol: The Movie'
Okay I May Have Accidentally Raised Mansplainers
The Obamas’ New Family Rule? Get Vaccinated If You Want To Hang Out With Us

"As we bring Americans together for a historic and inclusive inauguration of President-elect Biden and Vice President-elect Harris, we want to ensure that we are engaging folks of all ages and bringing families together in their homes to celebrate a new beginning for the country and an America united," Presidential Inaugural Committee CEO and Delaware State University President Dr. Tony Allen said in a statement released by the committee.

So, What Can We Expect?

"Our White House: An Inaugural Celebration for Young Americans" will be the first-ever inaugural livestream specifically curated for kids. Akeelah and the Bee star Keke Palmer will host the livestream, which will run before and during the Inaugural Ceremonies that see Biden and Harris sworn in as the next president and vice president of the United States.

Other segments of the curated livestream will include a Nickelodeon-produced piece on presidential pets, a round of trivia questions with incoming Second Gentleman Doug Emhoff, and educational segments produced by the Library of Congress.

How Can We Watch It?

To catch "Our White House: An Inaugural Celebration for Young Americans," families will want to log on to BidenInaugural.org/youth or beginning Wednesday, Jan. 20, at 10 a.m. ET. The two-and-a-half-hour event will also be streamed online by PBS NewsHour and broadcast by Nickelodeon, Discovery Education, Amazon Prime Video, and various other websites, apps, and social media platforms. A Spanish-language version of the livestream will air after the inauguration on Discovery Familia.

How Else Can Kids Be Involved With The Inauguration?

Kids — and parents — can also celebrate the Biden-Harris inauguration with a special 14-page printable inauguration coloring book created by the Presidential Inaugural Committee. Along with portraits of Biden and Harris, the coloring book features drawings of incoming First Dogs Champ and Major, Air Force One, and Biden's signature aviator sunglasses.