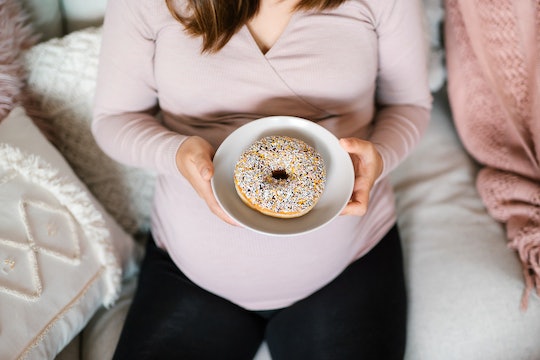 He kicked her and her mother out.

A pregnant woman’s snacks are a sacred thing. This seems like modern accepted wisdom. If a pregnant woman has a particular craving for some kind of food, that food is hers, right? That’s what this dad-to-be seems to think, at any rate. When his niece ate his pregnant wife’s snacks, this protective husband made a drastic decision that has Reddit discussing the nature of pregnancy cravings and boundaries.

A dad-to-be took to the sub-Reddit forum Am I The A**hole to share a recent experience with his wife, who is in her 20s and currently in her seventh month of a super high-risk pregnancy that will be her “first and last” after miscarriages and other physical struggles.

“She's currently 7 months pregnant and all she's been craving is plain grilled ground beef SOAKED in garlic powder, red crushed pepper and Sriracha and peanut caramel marzipan,” the dad explained on Reddit, and naturally he wants to ensure she has everything she needs. Particularly the marzipan.

“I bulk bought some marzipan candies for her and placed them in her cubby in the pantry (where she keeps her maternal vitamins, anti-nausea pills and snacks),” he wrote. “My wife's sister came to visit with her daughter for two weeks (This Sunday) and we welcomed them to the pantry but asked that they not touch anything in the cubbies because those are especially for us.”

Unfortunately, his niece didn’t seem to get the memo that the cubby snacks were off-limits. When the original poster went out to run errands one day, he came home to find his wife crying. Her snacks had all been eaten, and everything else in the house “smelled disgusting” to her. When he confronted his sister-in-law, it seems her daughter had eaten the snacks and she refused to replace them.

He asked her and her daughter to leave the next day, and is now being called out by his wife’s family to the point where he is beginning to doubt his decision. So he took to Reddit for some outside advice. And Reddit had his back.

“You gave a clear boundary, they crossed it,” wrote one Reddit user. “Your wife has specific cravings, your Doctors would be the ones to give you the food advice and whether its too much etc not the family. After the trauma your wife has been through these people seem to have no empathy for her.” Another noted, “it was literally the one thing you asked of them and they went and opened the cubbies anyway and helped themselves. They shouldn't even have touched them. And refusing to replace them too???”

Cravings are such a personal thing for every pregnant person, and they certainly hit some harder than others. A little empathy in these situations go a long, long way. Someone get this woman more marzipan, stat.