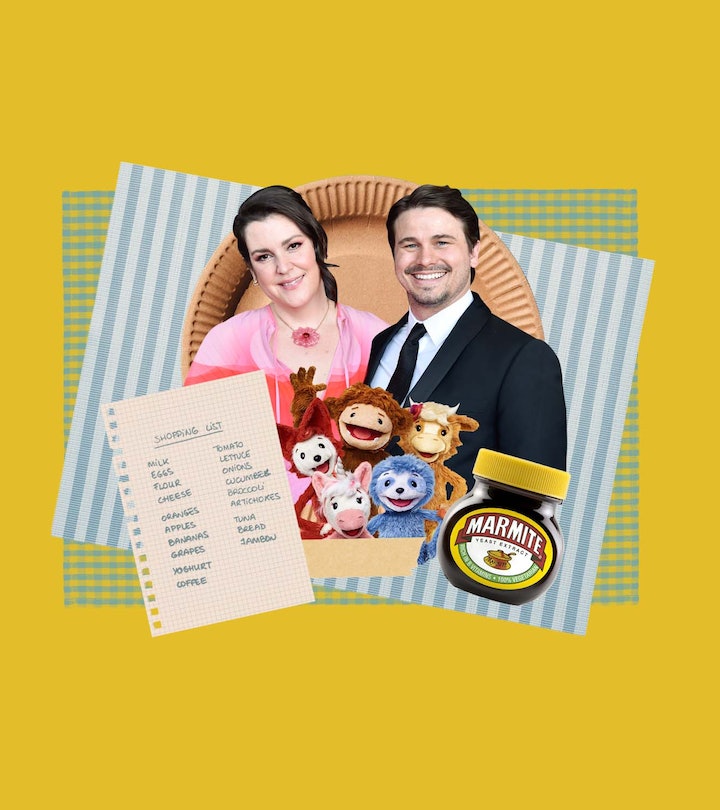 We talked to the Slumberkins actor about adapting to his family’s palate and his food adventures from New Zealand to Scotland.

You know Jason Ritter from any number of TV shows over the past two decades. Joan of Arcadia, Parenthood, Gravity Falls, Girls, and Raising Dion just to name a few. You may also know him from his marriage to Yellowjackets, Candy, Sweet Home Alabama, and Ever After actress Melanie Lynskey, with whom he shares a 3-year-old daughter, who just happens to be a big fan of his newest project.

Slumberkins is a whimsical new series on Apple TV+ featuring puppets from the Jim Henson Company. Based on the beloved series of books and toys of the same name, Slumberkins follows the pre-school adventures of Unicorn, Fox, Sloth, Yak, and Bigfoot as they learn important social-emotional skills along the way. “It's all about navigating big feelings for kids who are as complex as we are emotionally,” explains Ritter, who plays Fox’s dad. “And, a lot of times we don't necessarily have the tools to help them express themselves or help navigate some of these emotions. As much as it is for children, I've gotten a couple of tips as a parent, as well.”

Funny how that happens. Whomst among us hasn’t learned a thing or two from Mr. Rogers or Bluey.

Unfortunately, there’s another area where Ritter doesn’t necessarily have the appropriate navigational tools: dinner time... or, really, any meal. “Eggs are my staple. I remember when I first was taught by a friend of mine how to make an egg in a hole, I thought that was about the pinnacle of cooking!” he laughs. “So when I make eggs, that's where I feel like the most chef-like with all my different egg dishes.... and my daughter allergic to eggs and Melanie is a vegan. So I can’t do any of that!”

For our Family Dinner series, we talked to Ritter about meals in his house, must have pantry staples (hint: you never know when you’re going to have to have an ice cream social), and that time he got to party like a culinary king in Scotland.

You grew up in a family of actors — I have to imagine schedules were pretty chaotic — how did that influence the food culture and family dinners in your house?

JR: There were some chaotic schedules, but it was important for my mom especially to have us all sit down for dinner at the same time and talk about the day and go through it. There was a big bonding thing. Breakfast was basically quick eat before you get in the car, especially as high school rolled around. And I would sleep in as much as I could. There's a lot of wolfing that down, but dinner was always a family event.

Is that an important value for you now that you have a family of your own?

Our daughter is so young that she eats a lot earlier than we do, but there are times where we all sit around, and we do it at the same time. But for the most part she eats, and then we eat.

That makes sense: not every family wants to eat at 5 o’clock...

In my experience, I have found feeding small humans can be difficult. Not just timing but picky eating. Have you had any experience along those lines, or have you been lucky?

It's been a little bit of both. There were some dietary restrictions right off the bat — allergies and things like that. There were a lot of things that I was used to having that I couldn't pass on to her in terms of dairy and things like that. And then she, for whatever reason, has always been absolutely disgusted by meat. She's not allergic or anything like that, but whenever I've tried to hand her a bite of chicken or whatever I'm eating, she's just like, “Are you telling me I should put that in my mouth? That is absolutely disgusting.” I've also had to adapt a little bit. Because my wife is vegan, so I wonder if in the womb she wasn't getting a lot of that so maybe... I don't know how it all works, but it's funny to have a whole life of one sort of dietary set of rules, and then my family, I've adapted to their thing.

What are some items that are always in your pantry?

There's always cereal. For whatever reason that's a big one for me. We always have some pasta sauce in there. Ice cream cones, for just in case the moment arrives. Our main thing, which is pure Melanie influence, is Marmite from New Zealand. The Marmite that we get here in the U.S. is mostly the British Marmite. And, so whenever we go back to New Zealand, we stock up. We smuggle it home. I thought it's the same, but it really tastes completely different. I've now become accustomed to it. And, our daughter absolutely loves toast with Marmite, and she just had her first experience of going to preschool. Some of the kids were like, “Are those pancakes? What is that? What are those little cubes.” Sort of looks like burnt toast on the top. But she's like, “It's Marmite. You don't know what Marmite is?”

So you and Melanie have your own things going on, culinarily speaking, but do you work in the kitchen together?

I am mostly a sous chef when it comes to cooking. I'm great at dicing and chopping and preparing and stirring. I'm a great stirrer! I can definitely watch a pot. It's funny. Most of the things that I know how to prepare are chicken or things like that, so unless I'm by myself, it's sort of useless. But I love taking a back seat and helping if I am allowed to. But Melanie, she's really good. She makes an incredible pasta and sauce with all these things in it. She knows she's good at it.

What about your daughter? I know she’s still quite young still, but is she interested in helping in the kitchen at all?

She's pretty young. She likes to talk about it, and she likes to try new things. Well, she likes to try some new things. That's sort of the hardest part is you realize how much children enjoy routine. And, as much as I like shaking it up and the idea of having a different thing for different meals, she loves her staples, and we feel really lucky that some of those staples that she enjoys are vegetables; that was very lucky. We're like, “We can't get her to eat these other vegetables.” And, they're like, “If there's two or three that she really enjoys, then that's great.”

Isn’t it so frustrating? “It’s my job to feed you properly, but I can’t make you eat anything.”

It's just impossible. We learn these little tricks to try to get her to try things, so when she's feeling pretty adventurous that's good.

Can you think of a favorite meal that you've had that's particularly memorable, home or otherwise?

Gosh, let me think. There was one meal that I had at... This is such a weird story, but I was at the Edinburgh Film Festival and a bunch of us got invited to a dinner at the Castle. And they had this incredible whiskey and all these little incredible bites created by the castle chef, but there was also entertainment. I felt like I had been transported to a different time. I thought castles were now mostly just for tour groups and things like that. But here was this incredible castle, and Patrick Stewart was right across the way, and that was very exciting for me.

Oh I feel like that’s Patrick Stewart in his natural environment! I feel he's someone who mentally is always in a Scottish castle.

Exactly! That was pretty memorable, although the whiskey did do a good job of trying to make me forget, but not quite.

More Like This
Priyanka Chopra Posed On The Cover Of 'Vogue' With 1-Year-Old Daughter Malti
Does The FDA's Plan To Limit Lead In Baby Food Go Far Enough?
The Sweetest Things Paul Rudd Has Said About Being A Dad
Kate Middleton Used A Classic Mom Move To Comfort A Royal Fan Who Asked For A Selfie
What Parents Are Talking About — Delivered Straight To Your Inbox