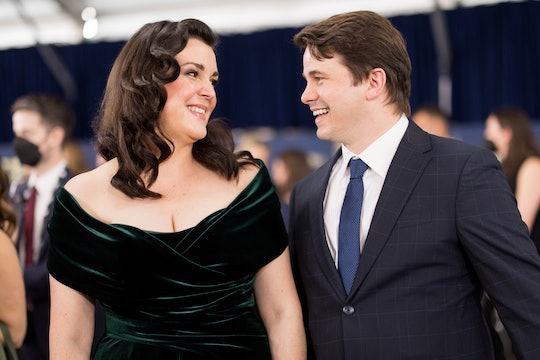 “She’s an absolute angel... she allows me to go and do my work.”

Most awards show acceptance speeches thank all the same people: spouses, agents, producers, god. But when Yellowjackets star Melanie Lynskey won the 2022 Critics Choice Award for Best Actress in a Drama Series, she thanked a person who usually doesn’t make the awards show gratitude list (but 100% should): her nanny.

“The most important person I think I have to thank before I finish is my nanny, Sally. I love her,” Lynskey, 44, said while accepting the award on Sunday. “She’s an absolute angel. She’s with my child, and my child is safe and taken care of, and she allows me to go and do my work. Thank you, Sally. I love you so much.”

Not only did Lynskey do something for her own nanny when she thanked her publicly for doing such a good and important job, she did something for nannies everywhere. As Lynskey said, because of Sally, she’s allowed to go and do her work knowing her child is safe. And for that, her nanny deserves an award (as do so many others). So who else does the actress have in her corner? Here’s everything you need to know about Lynskey’s family.

Melanie Lynskey has one child with her husband Jason Ritter

The 44-year-old actress welcomed her first and only child thus far with husband Jason Ritter, a daughter, in December 2018. While the pair attempted to keep her birth under wraps for a while, it was leaked after a couple of months.

“I guess the story got out, so! Yes! @JasonRitter and I had a daughter in December,” Lynskey tweeted in January 2019. “We love her so much; she’s perfect. Thanks to everyone for your sweet messages.”

In her birth announcement, she also took a moment to “correct” some media reports that said she “quietly” welcomed her daughter. “I was blasting A$AP Rocky and yelling a lot,” she tweeted. And like she did in her acceptance speech, she thanked those who were by her side. “Now I do get to publicly thank the wonderful doctors and the amazing heroic caring brilliant nurses of @NSH_Maternity in Atlanta,” she tweeted. “From labor & delivery to post partum, every one was an angel and I’m eternally grateful.”

Melanie Lynskey and Jason Ritter got married in 2020

Lynskey and Ritter (son of the late John Ritter and best known for his roles in Joan of Arcadia, The Class, The Event, Gravity Falls, and Raising Dion) began dating in 2013, according to Vogue, got engaged in 2017, and finally got married in 2020. Ritter was the model of a perfect, supportive husband at the Critics Choice Awards, as this tweet shows:

It doesn’t get much sweeter than a message like that.

Her daughter is now 3

While Lynskey hasn’t shared her daughter’s name with the world, she has shared a few sweet photos of her on social media. In an especially sweet birthday Instagram post for Ritter’s birthday, Lynskey shared a photo of her daughter wearing a tutu in her husband’s arms. “Happy birthday, beautiful husband. Thank you for making me cry with laughter daily. Thank you for giving our little daughter the safest, most joyful, most loving childhood,” she captioned the photo. “You are so fun. You are so kind, to everyone, even mean people. You are just the best person. And you are very very very very handsome and I love you with all my heart @jason_ritter.”

The proud mom has also shared some of the cute things her daughter has said to her. In a tweet shared on March 14, Lynskey recalled her daughter telling her: “You feel beautiful, and squishy! You don’t even have bones. I want to cuddle you all day.”

She comes from a big family

Born in New Zealand in 1977 to Kay Lynskey, a former nurse, and Tim Lynskey, an orthopedic surgeon, Lynskey is the oldest of five children, with three brothers and one sister.

As a child, Lynskey was reportedly “painfully shy,” as she told TIME; as a 6-year-old, she ate lunch in the teachers’ lounge to avoid the other children. “I couldn’t talk to kids, I couldn’t play the games they were playing, I just felt like an alien,” she shared with the magazine.

She was also given “a lot of responsibilities” at home, as she told Rolling Stone. “I was put in an adult position before I was quite ready to be there,” she said, adding that her parents are “complicated people” and her mother found motherhood “really, really overwhelming.” Lynskey found an outlet for her own angst when she was cast in a play and her feelings of anxiety vanished. The “freedom I felt, standing there and saying something that had been written for me and getting to be in someone else’s skin and not having to be Melanie,” she said, changed her forever.

She has an impressive résumé

Outside of her family life, Lynskey has a number of impressive credits under her belt. In 1996, she landed her a lead role alongside Kate Winslet in Heavenly Creatures, in which she played an outcast teen whose relationship with her best friend (Winslet) turns deadly. She won the Best Actress prize at the New Zealand Film Awards and firmly established herself as a talent to watch. After taking a three-year hiatus to go to university, Lynskey came back to the big screen in Ever After: A Cinderella Story with Drew Barrymore and went on to score roles in films such as But I’m A Cheerleader (1999), Sweet Home Alabama (2002), Up In The Air (2009), and most recently, Don’t Look Up (2021). She made it onto small screens, too, with a recurring role on Two and a Half Men (2003) and another on Castle Rock (2018), but it’s her current role as Shauna on Yellowjackets that’s getting Lynskey the most buzz ever. A housewife with a disturbing, secretive past, Shauna has given Lynskey a platform to give the most layered, dynamic performances of her career. It’s also given her the opportunity to get in touch with her inner rage.

“The way I was brought up was to not show a ton of emotion and not get angry,” Lynskey told Rolling Stone. “I’m trying to get better at letting the anger come out at all. There’s so many years of just not knowing what to do with it. I had a therapist once say something about, ‘You’re scared that if you even let a little bit of it out, it’ll just never stop. It’ll just overwhelm you and you’ll just be furious forever.’ Which really resonated with me.”

Lynskey is definitely a pro at channeling her emotions into her performance, to the benefit of her audience. You can stream Yellowjackets on Showtime, and if you aren’t familiar with the rest of Lynskey’s work, do yourself a favor and watch a few movies. You won’t be sorry.