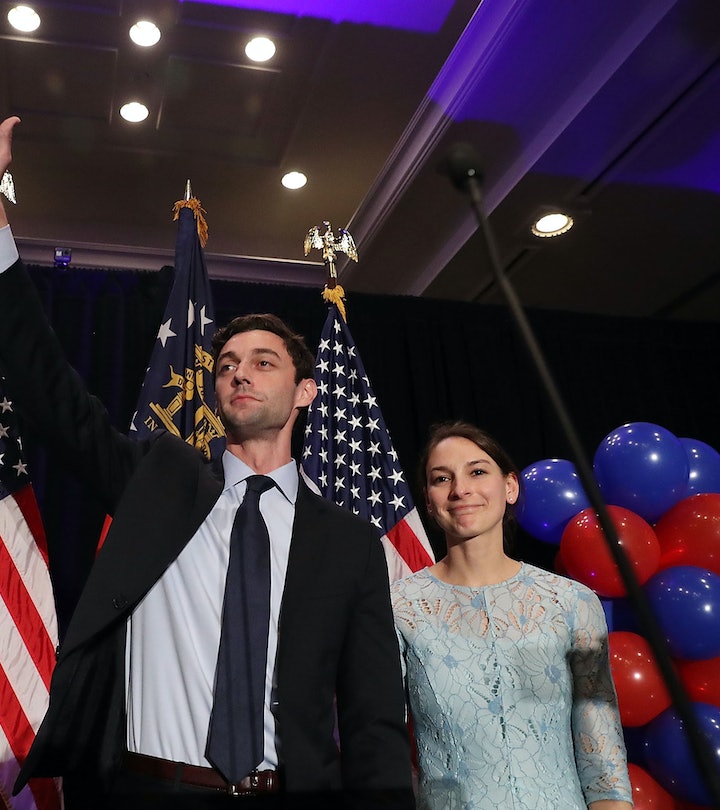 "My favorite person in the whole world, my best friend, my wife, the amazing Dr. Alisha Kramer."

Tuesday night was a big night for Georgia. For the entire country, really, as the Georgia Senate runoff election would effectively decide whether or not Republicans would remain in control. Everyone was watching the results come in. Well, almost everyone. Democratic Georgia Senate candidate, Jon Ossoff's wife Dr. Alisha Kramer went to work as an OB/GYN at the hospital for her regular shift. And this is the way political spouses need to be able to live their lives in 2021 — prioritizing their own careers without apology.

As of Wednesday, Jan. 6, Ossoff's bid for the Senate against Republican David Perdue was leading by about 16,000 votes, according to NPR, with Ossoff himself claiming victory ahead of news outlets. In a video message, he said: "It is with humility that I thank the people of Georgia for electing me to serve you in the United States Senate." Perdue has yet to concede, but the results are looking positive for Ossoff.

Journalist Patricia Murphy tweeted that Ossoff was watching the election results with his campaign staff on Tuesday night, while his wife, Dr. Alisha Kramer, worked an overnight shift in her capacity as OB/GYN at Emory University Hospital.

Several social media users praised Dr. Kramer for staying committed to her shift despite the importance of that night for her husband's future. As one person tweeted, "Jon Ossoff’s wife not taking election day off and going in for her overnight as an OBGYN is the correct amount of energy for a political wife."

Another person noticed that there appeared to be a pretty delightful trend happening in politics this year, "So great to see highly qualified, decent, dignified leaders are elected to govern and lead a dignified/civilized country and certainly their well educated spouses. Dr. Jill Biden, Dr. Alisha Kramer. And a Real team being structured by President Biden. Thank heavens. Thank God."

As NBC News projects that Ossoff has won the Senate runoff in Georgia, Dr. Kramer will be following in the footsteps of Dr. Jill Biden, who has said that she plans to continue teaching after her husband takes office. Dr. Biden will be making history as the first spouse of a president to continue her career, which is a truly exciting moment for feminism.

Of course, Ossoff is enamored with his wife. While speaking with supporters during a Facebook Live chat to discuss health care in October, Ossoff called Kramer “my favorite person in the whole world, my best friend, my wife, the amazing Dr. Alisha Kramer, OB/GYN, who is my hero and my role model and my guide.”