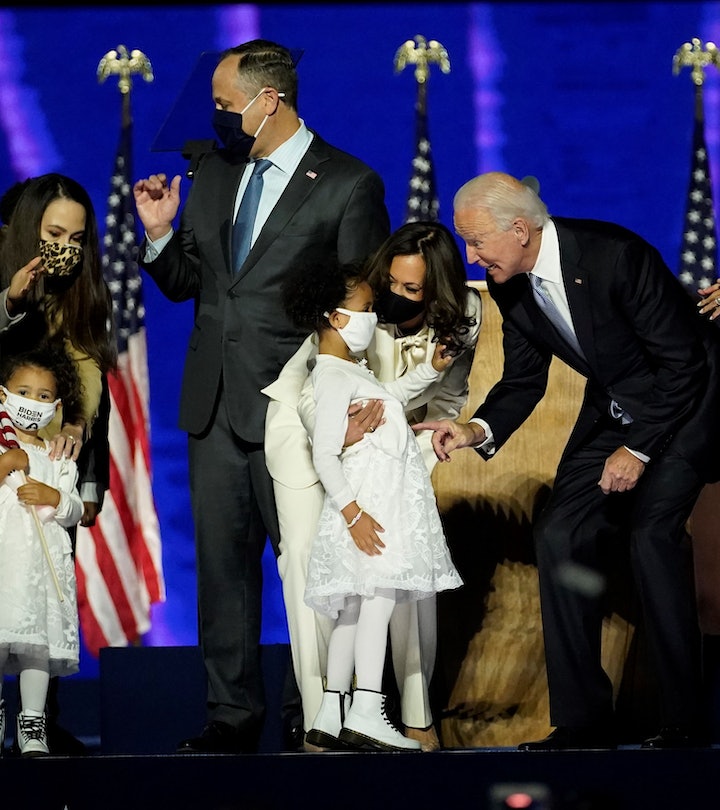 Kamala Harris' 4-Year-Old Great Niece Is So Inspired By The Election, She Believes She's President

Her little sister is a believer.

If only we could all have the confidence of Vice President-elect Kamala Harris' great-niece who believes she's president after the California senator's historic win. And what's more, she is so persuasive about it that she's working to convince other people too. I mean, she did get to stand on stage in front of the entire world after the 2020 presidential election was finally declared. Who could blame her for letting it go to her head?

Harris made history on Saturday when she became a whole host of firsts; the first female vice presidential-elect, the first Black woman in that role, the first South-Asian, and finally the first person who was a first-generation American citizen as both of her parents were immigrants. It was a truly beautiful moment and naturally Harris' family was on hand to help her celebrate. Her husband Doug Emhoff, who is also making history as the first "second gentleman" to enter the White House, her sister Maya Harris, her two stepchildren Cole and Ella Emhoff, and her niece Meena Harris, who brought along her two little girls. Both of whom wore white dresses to match their great aunt's white power suit (the color of the suffragettes no less) along with white Doc Martin boots.

The oldest of the two girls, 4-year-old Amara, had the chance to shake hands with President-elect Joe Biden on stage. And boy did it give that little girl some big ideas. As Meena Harris, a children's book author, wrote on Twitter, "In other news my 4 yo apparently has convinced my 2 yo that she was elected President."

It all starts with just one vote, right?

I mean, to be fair she did actually meet the real person who had been elected president after an incredibly tense election season, so you might think she would understand that she was not yet president. Her mother explained when she met Biden and shook his hand, little Amara had been "talking about this moment non-stop for WEEKS, and it finally happened." Still, perhaps she figured it was her turn since he had that one night on Saturday.

To be fair, Kamala Harris did sit her great niece down to gently walk her through exactly what the requirements would be should she like the position. Last week, Meena Harris shared a video of her daughter sitting on the politician's lap as she was telling her, "You could be president but not right now, you have to be over the age of 35." Amara, for her part, pointed out that she planned to be an astronaut president. And her mother shared a tweet on Nov. 7 saying that "My 4 year old just yelled 'BLACK GIRLS ARE WELCOME TO BE PRESIDENT!'" so it is definitely on her mind.

If 4-year-old Amara chooses to play pretend president (or astronaut president in her case) with her little sister, who are we to stop her? I suspect no one could, even if they tried.