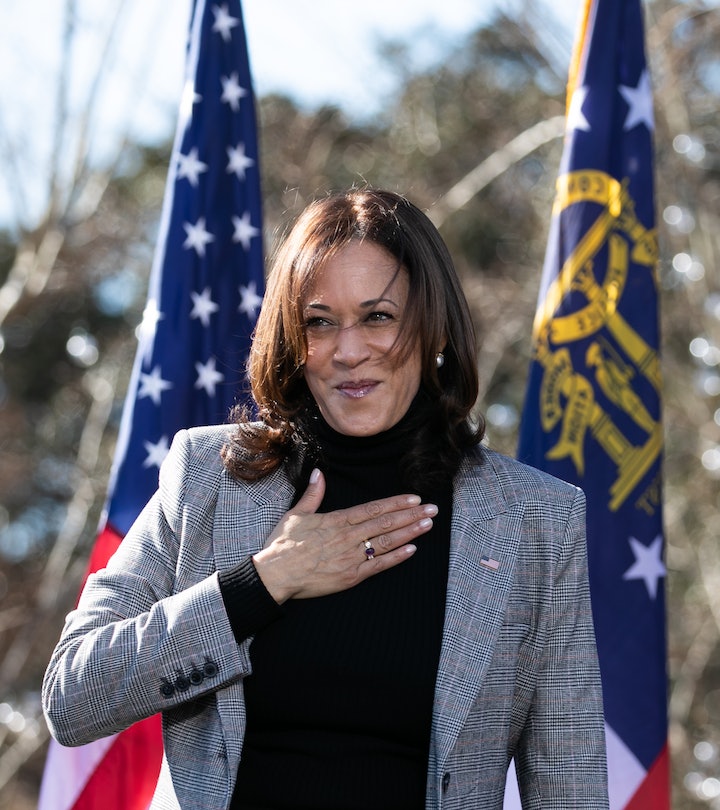 "I love our young leaders, so you keep doing what you’re doing."

Just as this year's historic presidential inauguration came to a close, one little girl got the surprise of a lifetime when she received a special video message from Vice President Kamala Harris. And not only did America's first Black, South Asian woman vice president say hello, she also shared an inspiring message with the young girl.

In an Instagram post shared by Adrienne Melvin — whose husband is Roger Melvin, the head stage manager at the Lincoln Memorial, according to Yahoo! News — the young girl's mother shared that her daughter, Addison, believes Harris "invented" pearls, which is fair since she often wears them and women all over the country donned them on Inauguration Day to honor our new vice president.

"Addison thinks 'Kamalayas' invented pearls, she asked her daddy to please tell her about the pearls she just got," she wrote on Instagram. "He promised...And daddy's don't break promises."

And as it turned out, the vice president, who is also the first HBCU graduate in the White House, had a message for Addison as well. "Addison, I just got inaugurated today to be your vice president and I work with your daddy,” Harris tells the young girl in the video message. “He’s so smart, he’s so wonderful and he told me all about you and I just can’t wait to meet you. But you keep leading, I love our young leaders, so you keep doing what you’re doing. I’ll see ya later.”

"Do you know who that was!" her mother says as Addison laughs excitedly and then pretends to faint to the ground after she watched Harris speak directly to her.

"I'm so full," Addison's mother captioned the video on Instagram, which has over 4,000 likes since it was shared on Jan. 21.

Viewers flooded the comments with the reassurance that representation truly does matter. "I hope this little queen knows this can be her one day," one commented, while another said, "This is a treasure for a lifetime!

Others praised the sheer significance of the moment, as one man expressed on Instagram, writing, "But who else in Kindergarten can say they got a personalized message from THE FIRST WOMAN VP?!?!"

As for the man who helped make this video happen, Addison's dad Roger Melvin acknowledged in his own Instagram post that, yes, his job is "cool." "I just can’t say it enough...my Job is cool," he wrote alongside the sweet video. "Thank you @kamalaharris VPOTUS!! For showing some love and inspiration to my baby girl Addison."