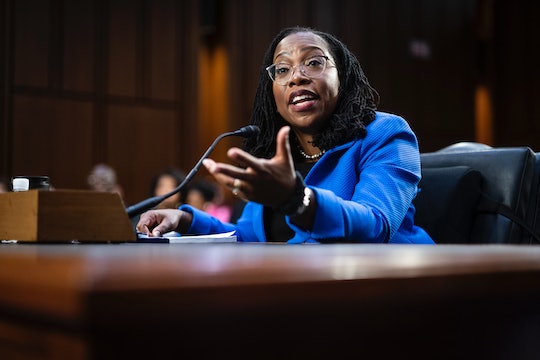 A stranger once kept her going at Harvard and she’s sharing that message with younger generations now.

The Honorable Ketanji Brown Jackson, President Joe Biden’s nominee to replace Justice Stephen Breyer on the Supreme Court, entered her third day of confirmation hearings on Wednesday. Senators of the Judiciary Committee asked questions ranging from her judicial philosophy (she preferred to use the term “methodology”), past cases she’s tried, to her involvement in her children’s school. But while many of the questions were difficult, even hostile, a question from California Sen. Alex Padilla allowed Ketanji Brown Jackson to deliver an inspiring message to kids, particularly children of color.

Padilla offered a story of being discouraged to apply to MIT because his teacher didn’t want him to be “disappointed.” He then asked the nominee what she would tell “the most diverse generation in our nation’s history,” some of whom might have doubts that they could achieve a similar degree of notoriety and success that she has.

Judge Jackson was clearly touched as she thanked the senator for the question. “I appreciate the opportunity to speak to young people,” she said, calm and composed but with a faint quaver in her voice. “I do it a lot for the reasons that you have articulated. I hope to inspire people to try to follow this path because I love this country, because I love the law, because I think it is important that we all invest in our future and the young people are the future so I want them to know that they can do and be anything and I’ll just say that I will tell them what an anonymous person said to me once, I was walking through Harvard yard my freshman year.”

“It was rough, it was different from anything I’d known. There were lots of students there who were prep school kids like my husband who knew all about Harvard,” she paused briefly for good-natured laughs from the chamber, including her own. “And that was not me. I think the first semester I was really homesick, I was really questioning ‘do I belong here; can I make it in this environment?’. And I was walking through the yard in the evening and a Black woman I did not know was passing me on the sidewalk and she looked at me and I guess she knew how I was feeling and she leaned over as we crossed and said ‘persevere.’” She paused for a moment, emotion audible as she continued, “I would tell them to persevere.”

The message instantly resonated, spurring a Twitter hashtag of #Persevere, along with people – particularly Black women — sharing their own similar experiences of feeling as though they didn’t belong or receiving much needed support from someone who understood their struggle.

“Every Black Woman has a story of another Black Woman who saw her, knew the journey and its struggles and shared how they got over and encouraged with a word or two,” actress Yvette Nicole Brown tweeted.

“This story,” tweeted reporter Tanzina Vega. “The stories of so many BIPOOC women who try their hardest in places that don’t accept us. Persevere indeed.”

“‘Persevere.’ That hits me in the gut,” tweeted National Women’s Law Center president Fatima Gross Graves. “If you’ve ever been the only person in a room, you know that feeling. Black women know that feeling — persevering in the face of those who want us to fail. But — Judge Jackson is here, and she’s going to the highest court in our country.”

Twitter user @GenuinelyEricka agreed, “The way Judge Jackson just encouraged me with her words and response to Senator Padilla. ‘Persevere.’ Such a simple message.”

Judge Jackson wrapped up her final day of questions on Thursday. If confirmed, she will be the third Black Justice, the sixth woman, and the first Black woman ever on the Supreme Court.