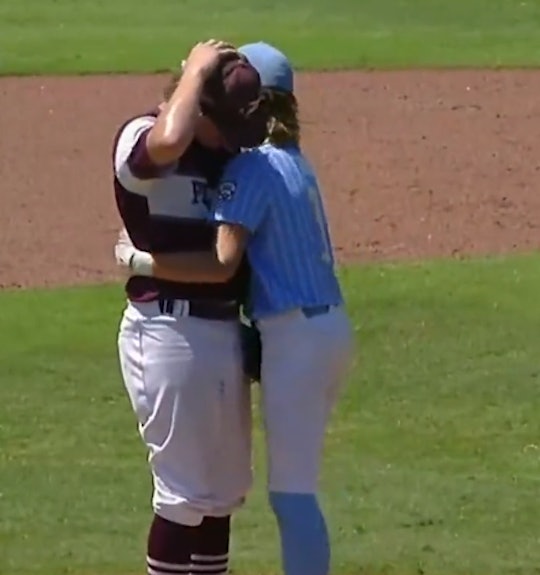 The young boy displayed true sportsmanship and left the internet in tears.

There are so many reasons why parents want their kids to play organized sports, of course. Physical fitness, community, team work, and perhaps most especially empathy. The best kinds of experiences in team sports don’t just teach kids empathy, they model it in themselves. Take the Little League pitcher who became distressed after he accidentally hit a batter in the head with a ball. That sweet boy was devastated. And what’s even lovelier is the batter coming over to comfort him and reassure him he’s okay. These kids truly are the best of us.

Texas East pitcher Kaiden Shelton was doing a fine job in the first inning of the Southwest Region championships in the Little World Series until he accidentally lost grip of the ball, MLB.com reported. He was pitching against Oklahoma batter Isaiah Jarvis when he noticeably lost his grip and the ball went wild, hitting Jarvis in the helmet and knocking him to the ground. Jarvis eventually got up and walked to first base, but the pitcher was devastated.

Shelton was so upset by the accident that his own coach called a time-out. In a video of the moment, Shelton is crying at the pitcher’s mound when Jarvis walked out to give him a hug.

“Hey, you’re doing just great,” Jarvis whispered in Shelton’s ear. The crowd roared in response. And I guarantee more than one parent was crying.

The moment between the two young players got a big reaction online. “That is absolutely beautiful on both sides. The genuine caring and concern for the opposition player shows two young men who have been reared to be civilized human beings, as well as good sportsmen. I am literally teary-eyed and choked up at this display of humanism. Thank you,” wrote one social media user, while another added, “Now that's what you call good sportsmanship, the Pros should take notice how the younger guys do it. I've seen it before, year after year in the Little league baseball games.”

Both of these boys are excellent examples of how competition and empathy can exist on the same playing field. That you can want to win and still be the best version of yourself. That it’s okay to cry if you’re feeling shaken up and okay to comfort someone on the other team.

There is crying in baseball, apparently. And it’s actually a really beautiful thing.

More Like This
'Squid Game' Is Coming Back For Season 2 On Netflix: Here’s What Parents Need To Know
The FDA Is Worried People Are Cooking Chicken In NyQuil
Nebraska Judge Rules Two Mothers Cannot Appear On Their Sons' Birth Certificates
Quinta Brunson Got A Sweet Card From A Kid On Abbott Elementary After Her Emmy Win