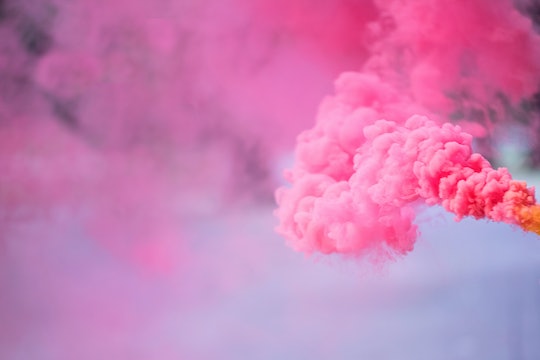 The blast was heard in the next state.

Gender reveal parties have taken an extreme turn in recent years. While some parents might focus on something gentle like blue and pink cupcakes, others go for something a little more dramatic that could have legal consequences. Like a man in New Hampshire who was charged and fined over $600 for an explosive gender reveal that was felt miles away.

On Tuesday, Anthony Spinelli of Kingston, New Hampshire plead guilty to a disorderly conduct charge after he set off 80 pounds of an explosive called Tannerite in an April gender reveal party. Spinelli and his family thought the event would be safe as the Tannerite, which is an over-the-counter explosive used in firearm practice, was set off in a quarry, the Kingston police told ABC News. Instead, people in New Hampshire and Massachusetts felt the blast.

Sara Taglieri, a woman who lived close to the quarry reported at the time that the blast “knocked pictures off our walls,” while her husband reported that a neighbors’ home had suffered a cracked foundation from the explosion. Houses within a 20 mile radius of the explosion reported shockwaves from the blast on both sides of the border.

A gender reveal party was heard several towns away.

Spinelli has since been fine $620 by a New Hampshire court, with $500 of that fine suspended providing he stays out of trouble, according to court documents shared by ABC News. “Based on the facts, at the conclusion of the investigation, we feel that the charge and the disposition were appropriate,” Kingston police said in a statement per The Independent. “We are very thankful no one was injured during the gender reveal incident and sympathetic to the fact it startled the community.”

The dad-to-be, who is expecting a son with his wife in September, told the Union Leader, “Everything went to plan, but we didn’t realize that it would cause such public alarm.” He added that he and his wife have been surprised by the media attention. “We certainly didn’t think it would blow up to the extent that it did, going around the world. That was definitely unforeseen.”

The explosive gender reveal in New Hampshire came months after another of its kind sparked a wildfire across 7,000 acres in California last September, killing one firefighter in the process of trying to get it under control.