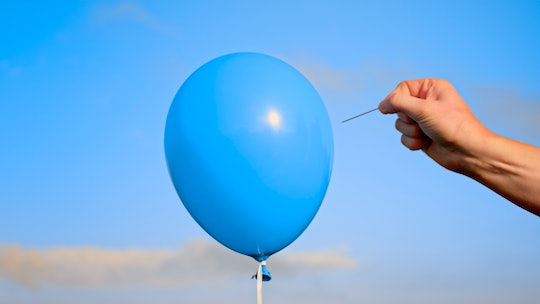 “I’m all up for silliness and whatnot, but that was extreme.”

Families in several towns across New Hampshire and even as far away as northern Massachusetts felt their houses rocked by a mysterious, massive blast on Tuesday. And it turns out the cause of that blast that shook all of those homes was, in fact, caused by a gender reveal party. According to a report from local news station WMUR, a family decided to reveal the sex of their unborn baby by using firearm explosives at a construction site.

The Kingston, New Hampshire family reportedly believed setting off the explosives at a local quarry would make their gender reveal safer, but that was not the case. “We heard this god-awful blast,” Sara Taglieri, who lives close to the quarry, told WBTS. “It knocked pictures off our walls.” Her husband told the news outlet that their neighbors’ home had a cracked foundation as a result of the explosion.

The Kingston Police Department received several reports of a loud blast happening around 7 p.m. on Tuesday evening, and discovered the cause of the blast was 80 pounds of an over-the-counter explosive called Tannerite. The blast was felt throughout a 20-mile radius, with home surveillance video capturing the blast miles away in the town of Plaistow, according to ABC News.

The person who detonated the explosives has turned himself into police, and charges are still being considered, according to NBC Los Angeles. Police have since viewed the footage of the video and revealed that the baby is a boy.

Gender reveal parties have been a popular way for parents to share their excitement about their new baby since the advent of social media, with many choosing things like different colored balloons, cake, and other harmless ways to reveal they are having a boy or a girl. But in recent years, some have gone with more extreme and dangerous ideas. Last September, a “smoke generating pyrotechnic device” used in a gender reveal in San Bernadino, California saw more than 7,000 acres of land burned after it caused a wildfire. In February, a dad-to-be was killed when a homemade gender reveal device exploded in New York.

This most recent gender reveal explosion did not see any serious injuries, thankfully, but local resident Sara Taglieri was still not impressed when she found out the cause of the explosion. “Are you kidding me?” Sara Taglieri told WMUR. “I’m all up for silliness and whatnot, but that was extreme. It was ridiculous. I don’t have any other words for it.”