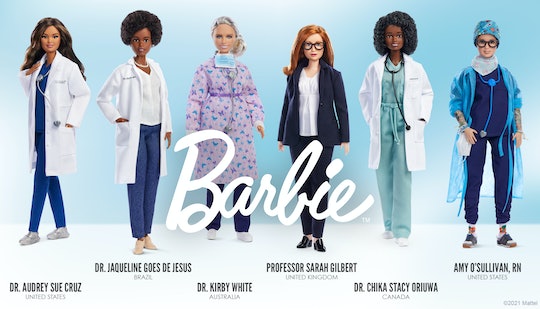 Barbie Honors “Heroes Of The Pandemic” With Dolls Of Scientist, Nurse, & Vaccinologist

The women the dolls are modeled after have been on the frontlines of the Covid-19 crisis.

Representation matters and it comes in many forms. To honor frontline medical workers, Mattel has spotlighted six incredible women from four countries who’ve all made differences and sacrifices during the pandemic with dolls that look just like them.

“Barbie recognizes that all frontline workers have made tremendous sacrifices when confronting the pandemic and the challenges it heightened,” Lisa McKnight, senior vice president at Mattel and global head of the Barbie brand, said in a statement. “To shine a light on their efforts, we are sharing their stories and leveraging Barbie’s platform to inspire the next generation to take after these heroes and give back. Our hope is to nurture and ignite the imaginations of children playing out their own storyline as heroes.”

To that end, during the month of August, Barbie will donate $5 from each eligible doctor, nurse, or pandemic doll sold at participating Target stores to the First Responders Children’s Foundation, an organization that provides financial support to children who have lost their parents in the line of duty.

So who are these six incredible women? Let’s have a look.

Amy O’Sullivan was working as an emergency room nurse in Brooklyn when she treated the very first patient with Covid-19 in the city. She contracted the infection herself, was hospitalized and intubated, and eventually went back to work as a frontline nurse to keep helping others. O’Sullivan appeared on the cover of TIME as one of the 100 most influential people of 2020, and now she has her own Barbie, painstakingly recreated with her exact tattoos and everything.

Dr. Audrey Sue Cruz is a Las Vegas frontline worker who not only worked through the pandemic, but also banded together with other Asian-American physicians to create a viral video along with the hashtag #IAmNotAVirus to stop racial discrimination.

“I’m so incredibly honored to be a Barbie Role Model, shining a light on the commitment and compassion all frontline workers exhibited over the past year and a half,” Cruz told the Las Vegas Review-Journal. “Kids imagine they can be anything but actually seeing that they can, and hearing the brave stories of others, makes all the difference.”

Dr. Chika Stacy Oriuwa of Canada is a University of Toronto psychiatry resident who is working to stop systemic racism in the healthcare system. She told CBC News that she was especially excited to see a Black female doctor like herself represented by Barbie. “What is even more beautiful about this opportunity is that the Barbie is a Black female doctor that is made in my image,” Oriuwa told the news outlet. “That really speaks to my core value and my core belief that you can truly become anything and you can truly occupy any space and thrive.”

Professor Sarah Gilbert made a massive difference in the Covid-19 pandemic. Gilbert is a professor of vaccinology at the University of Oxford, and she lead the development of the Oxford/AstraZeneca vaccine in the U.K. “It’s a very strange concept, to have a Barbie doll created in my likeness,” she told Reuters. “I hope it will be part of making it more normal for girls to think about careers in science.” Her likeness was captured right down to her oversized black glasses.

Dr. Jacqueline Goes De Jesus works as a biomedical researcher. She has been credited with being the lead on a genome sequence of a Covid-19 variant in Brazil a mere 48 hours after the first confirmed case was discovered in Latin America. Her doll shares the same white lab coat, pearls, and natural curly hair as the doctor herself.

The final Barbie representing women in STEM is Dr. Kirby White, an Australian general practitioner who co-founded the Gowns For Doctors initiative during the pandemic. White helped to develop PPE gowns for doctors that could be laundered and reused as they continued to treat patients, and her Barbie is wearing one such gown.

Each of these women had more than a Barbie created in their honor. They had their likenesses, their passion, their hard work imprinted onto these little dolls. Which will in turn make it into the hands of children who will see them and know. These women changed the world. And so can they.