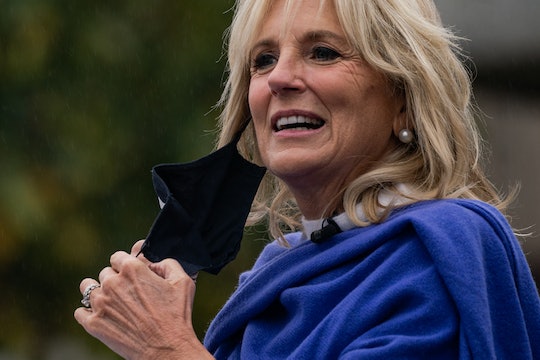 It turns out she is a doctor by their definition so there.

After a Wall Street Journal op-ed questioned the use of her title, Merriam-Webster responded to Dr. Jill Biden's critic with a perfect, simple tweet. A reminder of what the word "doctor" actually means, and the future first lady embodies that word to its core.

On Friday, the Wall Street Journal published an op-ed by longtime writer Joseph Epstein about the validity of Dr. Biden's use of her title. Epstein wrote in part, "Madame First Lady — Mrs. Biden — Jill — kiddo: a bit of advice on what may seem like a small but I think is a not unimportant matter. Any chance you might drop the 'Dr.' before your name? 'Dr. Jill Biden' sounds and feels fraudulent, not to say a touch comic."

The op-ed went on to argue that Dr. Biden's PH.D. in education from the University of Delaware was not enough to earn her the right to call herself doctor, with Epstein writing, "A wise man once said that no one should call himself 'Dr.' unless he has delivered a child. Think about it, Dr. Jill, and forthwith drop the doc."

Epstein's article has been widely criticized on social media by people like Vice President-elect Kamala Harris' husband Doug Emhoff, who wrote in response, "Dr. Biden earned her degrees through hard work and pure grit. She is an inspiration to me, to her students, and to Americans across this country. This story would never have been written about a man."

Now Merriam-Webster has thrown its learned voice into the fray with a simple tweet defining the word "doctor" for anyone who might have forgotten its provenance: "The word 'doctor' comes from the Latin word for 'teacher.'" While Merriam-Webster did not officially attach the definition to Dr. Jill Biden, the timing of the tweet was symbolic, just one day after the op-ed.

Dr. Jill Biden is, of course, a teacher who plans to continue her work during her time in the White House, making history as the first wife of a sitting president to continue her career. And since she also earned her doctorate of education, this indeed earned her the title of "doctor."

Former First Lady Michelle Obama also spoke out in defense of Dr. Jill Biden's use of a title she earned, taking to Instagram to write an eloquent reminder that "Dr. Biden gives us a better example. And this is why I feel so strongly that we could not ask for a better First Lady. She will be a terrific role model not just for young girls but for all of us, wearing her accomplishments with grace, good humor, and yes, pride. I’m thrilled that the world will see what I have come to know—a brilliant woman who has distinguished herself in her profession and with the life she lives every day, always seeking to lift others up, rather than tearing them down."

The defense of Dr. Jill Biden is more important than the ridiculous criticism of her professional title. It means the world is shifting. Slowly but surely. Thanks to women like Dr. Jill Biden.