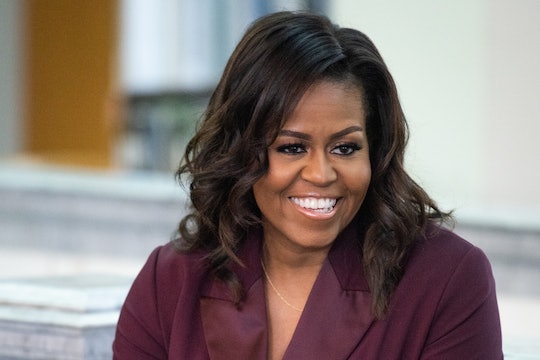 In a recent interview with People, Michelle Obama talked about how her relationship with her daughters has evolved since they’ve become adults. While change is sometimes difficult, the former first lady said she enjoys this new, more “peer-oriented” bond, as she put it, she has with her daughters Malia and Sasha.

The Becoming author spoke to People about what life during lockdown has looked like for her family, especially now that both her 22-year-old daughter Malia and 19-year-old daughter Sasha have moved back in with her and former President Barack Obama. As she explained to the magazine, things have shifted between her and her daughters.

“There's something about witnessing your children become adults and developing a different relationship with them,” Obama told People. “They didn't come back into the house into the same set of rules, because I didn't want them to miss out on independence. They came back as young women and our conversations are more peer-oriented than they are mother-to-daughter.”

Prior to the outset of the pandemic in March 2020, Sasha Obama was attending the University of Michigan while her older sister Malia was a student at Harvard like both her parents before her. Once classes moved online, the former first daughters moved home with their parents. And as Obama told People, it’s been a real joy to be able to “recapture” some moments with her daughters. “This time has allowed us to get some stolen moments back with our girls,” she told the magazine. “Those recaptured moments have meant the world to us and I think they've made our relationships with our children even stronger.”

Michelle Obama’s relationship with her daughters has shifted.

Malia and Sasha have clearly been raised to become their parents’ peers simply because they’ve always been encouraged to speak their mind with Barack and Michelle Obama. As their mother explained during a remote interview on Good Morning America last week, “If you sit around the dinner table, me and Barack, we can't get a word in edgewise and we like it like that. We want to hear their thoughts and their opinions, and that's where it begins." Obama also wants to make sure her daughters know that “who they are right now is enough.”

Obama’s adult relationship with her daughters is built on a lifetime of encouraging them to use their voices and their conversations have evolved with them.