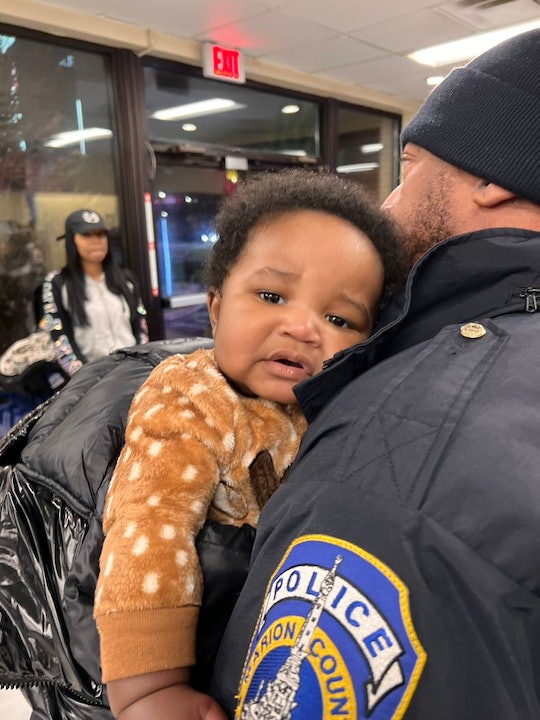 After searching for several days, Shy Delmar and Mecka Curry found both the kidnapper and the missing baby in time for a Christmas reunion with his family.

The case of Kason and Kyair Thomas, twin 5-month-old brothers who were abducted in their mother’s stolen car on Dec. 19, captivated not just their native Ohio but the whole country, fearing for the babies as temperatures across the country plummeted. While Kyair was found abandoned in a parking lot of Dayton International Airport the next day, his brother remained unaccounted for until Dec. 22, when the missing Columbus twin was found by two determined moms. Through a chance encounter, maternal intuition, impeccable powers of deduction, and grit, Shyann “Shy” Delmar and her cousin, Mecka Curry worked together to find the missing child and get him safely home to his family.

The two detailed their story, in a 16-part series, on Curry’s TikTok account. Curry begins with a simple assertion: “We are really just some mothers that were determined to find a baby.”

On Dec. 20, Delmar encountered a woman calling herself “Mae” at a gas station, selling toys. Delmar, preparing for the holidays, purchased some toys before giving “Mae” a ride to a store, completely unaware that the woman was actually Nalah Jackson, a suspect in the kidnapping of Kason and Kyair. The two exchanged numbers, and Delmar — who had filmed “Mae” at one point during the ride when the woman began acting strangely — didn’t think much of it until the next day, when she saw Jackson’s mugshots on Facebook in relation to the theft and kidnapping. At first, she couldn’t figure out why the woman in the mugshot was so familiar... but then it hit her. She shared her own video with some family members, including Curry, not wanting to call the police until she was “100% sure” it was the same person.

Curry, being a “top of the line detective” agreed — this was the woman wanted in connection with the missing children. That same day, “Mae”/Jackson called Delmar, who in a bit of a panic didn’t answer right away. The next morning, however, Delmar called Jackson to meet, along with Curry, to enact a plan to get the woman into police custody safely and stealthily. (The cousins were in touch with police throughout their subsequent interactions with Jackson.)

Initially, communication with the police — first the Columbus Police Department and then Indianapolis (IMPD) — was fruitless. The authorities weren’t grasping what the women were telling them: that they were with the suspect. After ongoing communication with IMPD and multiple trips to multiple stores (they hoped Jackson’s prolific shoplifting would attract the attention of security or law enforcement), the authorities contacted the women while they were in the car with Jackson. Curry pretended to be talking to a friend, but let authorities know exactly where they were driving so they could be pulled over.

Jackson was taken into custody on the afternoon of Dec. 22. The Indy Star reports that Delmar and Curry were commended by detectives in Columbus. “You guys did fantastic,” they wrote within 90 minutes of Jackson’s arrest. “Because of your help we are so much closer to finding that baby.”

But the cousins were not done: “Baby K,” as they called Kason, was still not found... and they’d found a clue in the back seat of their car where Jackson had been sitting: a bus schedule. When detectives didn’t answer the call about their lead, the pair sprang back into action, traveling the route themselves and thinking hard about any clues Jackson may have inadvertently dropped that could lead them to the missing Honda Accord and, in turn, Kason. They remembered that she kept talking about two locations: Indiana University and Papa John’s.

As soon as they pulled into the parking lot of Papa John’s, Curry saw the car. When she opened the door, she was alarmed by a “foul smell” and thought that the baby might already be dead. As Delmar went into a local business to alert law enforcement, Curry anxiously remained with the infant. As she screamed, she was relieved to hear the baby cry. The pair was also in touch with Kason’s family (they’d been in touch since Jackson was taken into custody).

The pair described the discovery as a “joyous moment,” and noted that aside from a need for a diaper change, Kason appeared to be healthy. (NBC4 reports that he was released from the hospital on Dec. 26.) LaFonda Thomas, the twins’ grandmother, has thanked Delmar and Curry — noting that what they did “took courage” — and told NBC4 that the return of the babies is the perfect Christmas gift. “This means everything,” she said. “My grandsons get to open up their presents simultaneously — not one alone wishing that the other was there. I’m so happy, I’m so grateful.”

Meanwhile, in their own retelling of the dramatic events, Curry and Delmar can be heard shushing their own “badass kids,” who are audible but off-camera. “Quiet, quiet,” Curry says, laughing. “Everybody wants to cry but everybody needs to go to their dads.”

Because even heroic super-sleuth moms are still, at the end of the day, moms.