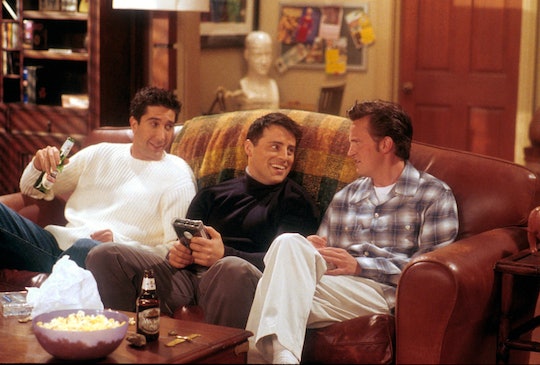 It was quite the journey.

For most of us, rewatching Friends is just a sort of pleasant trip down memory lane. We watch “The One With The Prom Video” or “The One Where Ross Gets High” and it’s almost like pleasant white noise, so familiar and comfortable. But imagine what it would be like watching it for the first time. With your teenage daughter, who was not alive during the ‘90s. Talk about culture shock. A mom who rewatched Friends with her 14-year-old daughter experienced exactly that and she shared her experience in a Twitter thread that is its own form of entertainment.

Writer Rebecca Makkai tweeted about her experience of rewatching the iconic NBC sitcom with her 14-year-old daughter and very helpfully offered a list of all the key elements she had to explain by the second season: “Milk cartons used to have pictures of missing kids. Who Dudley Moore was. Who Joan Collins is. What pagers were, and how they worked. (I needed help from my husband on this one.) That you could see people off at the airport gate. That you could meet arrive people at the airport gate.”

How did we not realize how much the world has changed since Ross followed Rachel to the airport gate to tell her he loved her? Or Monica’s Dudley Moore haircut when she asked for a Demi Moore? Speaking of Demi Moore, the list most certainly did not stop there. Makkai also had to explain, “The fact that if this apartment were real, it would be worth millions of dollars. What Bloomingdales is. Who Demi Moore is. That Eddie Moskowitz is a Jewish name.”

While all of these elements of Friends were possible to explain, there was one rabbit hole Makkai went down that she simply could not explain. As she tweeted, “Chandler's mother has sold over 100 million books. If we say that conservatively, she's made 2 dollars a book, she's worth 200mil. Chandler is an only child. She doesn't seem to have cut him off. And yet he makes Joey pay for a table he broke.”

The list continues on, with Makkai having to explain what a “great rack” was and the fact that we used to be forced to memorize phone numbers because we didn’t have cell phones. All of the explanations about the ‘90s aside, however, she noted that rewatching old shows like Friends offer “some great side convos going on about changing times, but re: the benefit of the doubt thing above, jfc yes of course we’re talking about the homophobia and fat-shaming and whitewashing and sexism.”

The next time you sit down to rewatch an episode or two of Friends, try watching it through the lens of someone who was not alive when it first came out. I bet it will change your experience entirely.

More Like This
SNL Swaps Clever Toddlers With Hopeless Boyfriends In Hilarious Old Enough Spoof
Amanda Gorman Spoke The Truth In Powerful, Viral Poem After Texas School Shooting
19 Children & 2 Adults Killed In Mass Shooting At Texas Elementary School
What Is Monkeypox & Should You Be Worried? Here’s What You Need To Know