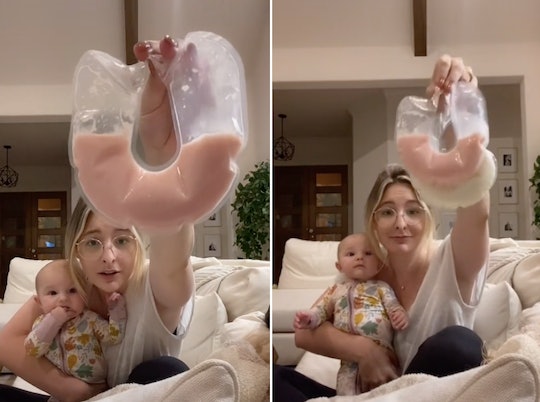 “I figured if I could share with a few moms then they would not go through the same panic I had initially experienced.”

The first time Jo Johnson Overby looked down and realized her breast milk was pumping out pink, she panicked. At the time, the new mom was only a few months into breastfeeding and pumping. And up until now, her milk had never resembled anything close to the color of strawberry milk.

“I was shocked at first because I hadn't been in pain or experiencing anything that prepared me [for the change],” the 28-year-old tells Romper. “I immediately called my sister to see if I should be concerned enough to call my doctor.”

What she learned was that pink breast milk is not uncommon. In fact, breast milk can appear yellow, orange, blue, green, and even brown depending on a number of different things. For Johnson Overby, the culprit was blood. “I had had some bleeding on my nipples from adjusting to exclusively pumping and so I thought that was the culprit but I wanted confirmation from another mom for sure,” she says. “She reassured me that it was actually common.”

Last month, Johnson Overby took her pink breast milk public, sharing her experience in a TikTok video that has since gone viral. “Nobody told me that whenever I had a baby, that if I chose to breastfeed my milk would come in an array of colors,” Johnson Overby said in the video, which has gathered more than 14 million views, 2 million likes, and more than 24,000 shares.

In the video, Johnson Overby then holds up a bag of white breast milk. “Exhibit A. The color you’d expect, right?” she said before putting the bag down and picking up a bag of breast milk that has a definite pink tint. “Exhibit B. And why is it pink?” she asked the camera. “It’s blood.”

Typically, blood in breast milk isn’t something to be concerned about. It’s often a sign of bleeding nipples (as was the case with Johnson Overby), broken capillaries, a benign growth in the milk duct (known as an intraductal papilloma), or increased blood flow to the breasts (known more commonly as rusty pipe syndrome). But blood in breast milk can also be a sign of mastitis or even breast cancer and those who don’t see their breast milk clear up within a few days should contact their doctor, according to Very Well Family.

What’s more, babies won’t be harmed by drinking breast milk that has blood in it, according to the non-profit breastfeeding education and advocacy group La Leche League International. In fact, Johnson Overby tells Romper her daughter, 5-month-old Gardner, didn’t react any differently to drinking pink breast milk than white. “I figure if I had been nursing I wouldn't have even known!” she says of Gardner’s lack of reaction.

She shared her experience in hopes of helping other new parents avoid a similar panic should they one day find their milk has come in a different hue. “I figured if I could share with a few moms then they would not go through the same panic I had initially experienced,” she says.

As for going viral thanks to her strawberry-hued breast milk, Johnson Overby says she’s loved seeing other parents come together in her video’s comment section to share their own stories of breastfeeding. “There is so much about motherhood and postpartum that isn't shared,” she says. “Something that seems relatively natural and that we should all know about but none of us did — the whole thing has made me feel a lot less alone in my cluelessness.”