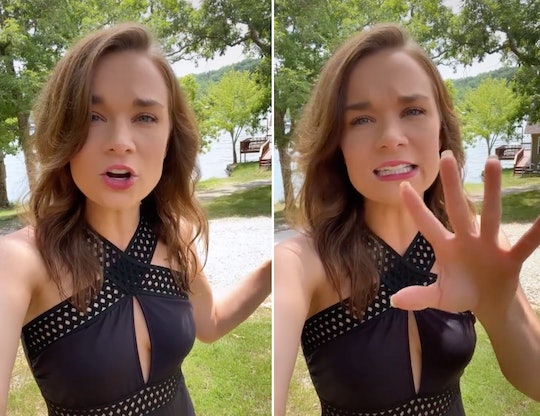 “Reporting live from the lake where I’m allegedly on vacation.”

When Kayla Sullivan took her 3-year-old son on vacation to the lake, it brought back fond memories of her own childhood. “Most of my summers as a child were spent at the lake and I love sharing that with my 3-year-old son,” she tells Romper. But, of course, being a kid at the lake and a parent at the lake are two very different experiences. And Sullivan decided to “report live” about her time at the lake as a mom in a true representation of what actual vacations for parents look like. Spoiler alert: not a vacation at all.

In a viral TikTok video, Sullivan, who is a former TV reporter for WLFI, shared that she was “reporting live from the lake where I am allegedly on vacation.” She said allegedly “because authorities are still working to determine when I will get a chance to relax.” Sullivan went on to confirm that she is “constantly stressing about whether my kid is going to fall in the water or experience some kind of severe injury here.”

The mom of one tells Romper that, while her time at the lake was fun, it’s also brought up a whole pile of anxiety and stress for her. “The waves, the deep murky water, and extreme heat gives me anxiety. I sound like a broken record with the number of times I’ve asked my son to sit on his bottom while he is on the boat, asked him to keep drinking water and chased him with the sunscreen.”

Much like most toddlers, Sullivan explained in the report that her son was prone to “resist preventative measures, like putting on a life jacket and sunscreen.” Despite all this, she reminded parents at the end that “these are memories that will last a lifetime,” right before realizing that she “forgot to shave an entire portion of my left leg.”

The video has been viewed more than 1.9 million times and has received praise from fellow parents who know exactly what Sullivan is talking about. “When your kids are small — vacations are not vacations — they’re just parenting in a different location,” wrote one. Another added, “The important live updates we need in these times of crisis. Thank you for being there on the frontline.”

This isn’t the first time Sullivan has gone viral with her parenting reports. Back in January, she reported on her toddler’s tantrum outside his bedroom where he was “being detained until nap-time is over.”

Sullivan tells Romper that, as a single mom, her actual idea of a holiday has changed significantly. “I consider my kid’s nap time, bed time, and an uninterrupted bathroom break a holiday these days. I’m okay with that! I know it won’t last forever and I’ll miss it all when he is grown,” she says. “I do appreciate my village though. My family helps me when I need some ‘me’ time and I think that’s important — especially as a solo mom.”

And as far as the leg shaving goes; credit to Sullivan for managing to shave anything at all while at the lake with a 3-year-old. That deserves its own separate report.

More Like This
Reddit Applauds Mom Of Five Who Stood Her Ground & Left Sleeping Dad Behind
"Crybaby Ambulance" In Europe Will Help Exhausted Parents
Dr. Jill Biden Just Delivered Some Frank, But Powerful, Advice On Motherhood
Little Miss Memes That Speak To Our Mom Souls...