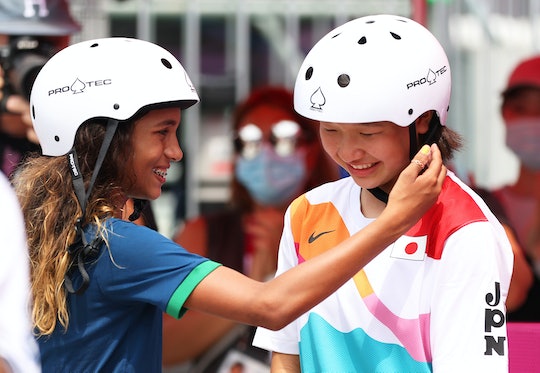 It’s the show of sportsmanship for us!

Great sportsmanship was demonstrated between two of the youngest athletes competing in the Tokyo Olympics. After winning the gold and silver medals in women’s street skateboarding, Momiji Nishiya and Rayssa Leal, both 13 years old, shared sweet exchange of hugs and congratulations that was captured on video and has since gone viral.

Momiji of Japan took home the gold medal and Rayssa, who’s representing Brazil, took the silver in the women’s street skateboarding in Tokyo on Monday. “Skateboarding is fun and interesting, I hope everyone can give it a try,” Momiji told TIME after her win.

Meanwhile, Rayssa tweeted a picture of herself with her medal and banquet of flowers. “Thanks for the fans here, guys. IM so happy,” the tweet read, translated from Portuguese. She also included a fairy emoji. Rayssa first caught attention in 2015 when she skateboarded in a fairy costume. The video instantly went viral and she was given the nickname “Skate Fairy.”

While the event was exciting on its own, as skateboarding made its debut as an Olympic sport this year, it was the innocent exchange of good, old-fashioned sportsmanship between two teen champs that has everyone talking.

“Watching these two 13-year-old giants win gold and silver then congratulate each other is awesome and adorable,” Dante Bestos retweeted the video on his page.

With good sportsmanship, the girls have also skated into history. The win makes Momiji Japan’s youngest gold medalist, according to The Japan Times, while Rayssa is the youngest Brazilian to represent and win a medal for her country.

To catch more of these exciting moments, here’s everything you need to know to watch the Olympics.