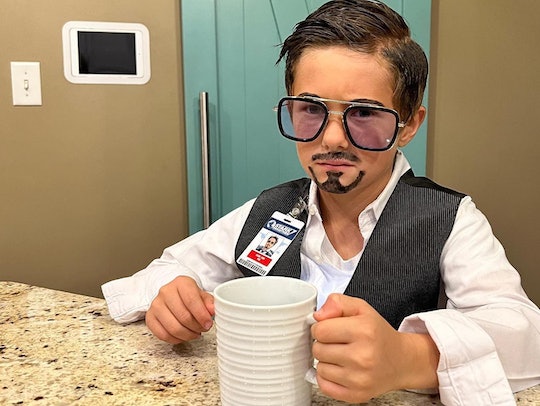 Wearing a Halloween costume to school is a surprisingly vulnerable act for kids. It takes courage to share their creativity with their classmates in such a visible way. They hope the other kids like it. But do you know what else takes courage? A kid facing those same classmates after been made fun of for a costume that meant so much to them. And that’s exactly what Jill Stahl Struckman’s son Evan did.

Last Friday, Struckman shared a story on Facebook about how her son was bullied over his Halloween costume, and while it certainly struck a nerve in social media users who empathized, there was a light at the end of the tunnel for young Evan.

This year, Evan had dressed as Iron Man alter ego Tony Stark, and he was clearly excited. “I hope his school is ready for this guy. He only answers to ‘Tony’ or. ‘Mr. Stark’ He wanted to to drive him to school but only in the Mercedes’ since I couldn’t drive him this very minute, Tony had to be a bus rider,” she wrote on Facebook.

Sadly, the bus appeared to be the source of some bullying.

A young boy was so excited to dress as Tony Stark.

Later in the day, Evan’s mom shared a heartbreaking update. “Got a call from Evan at school 20 minutes after he left on the bus. Apparently some kids on the bus (who weren’t even wearing costumes) told him he looked stupid. Evan got to school and immediately went to the bathroom and washed his face. When he called he was crying and soooo hurt that he didn’t even want to stay for his party. Here’s what my little Tony Stark looks like now,” she wrote, adding a photo of a distressed Evan in the backseat.

“We both have swollen eyes from crying and are on our way to try to find ice cream,” she added. “Kids need to understand that WORDS hurt.”

After being so excited to share his costume to needing to leave school in tears... what a horrible let down it must have been for Evan. Fortunately, he received an overwhelming amount of support on social media from people who wanted him to know he was “awesome” and “the cutest freaking Tony Stark ever.” And he also did something that takes real guts for a 10-year-old boy. What’s more, Struckman’s post has gotten thousands of likes and comments on Facebook.

“After going to Starbucks and talking through his feelings, Evan decided he didn’t want to miss his school party!!!” his mom wrote in a later Facebook post. “So we went home redid his AWESOME makeup and marched right back into school!”

Struckman tells Romper that her family has “received so much love and stories from people who have been bullied,” and has been especially moved by “stories of people sharing Evan’s story with their own kiddos who have been going through something.”

Tony Stark might be a Marvel hero, but Evan was the absolute hero of his own story this Halloween.

More Like This
Reddit Backs Mom Who Got Scolded By Teacher For Not Inviting 30 Kids To Birthday Party
The Best Valentine’s Day TV Episodes For Kids
Viral Hives In Children: What Doctors Want You To Know
Florida Teachers With “Unvetted” Classroom Books Could Face Felony Charges
What Parents Are Talking About — Delivered Straight To Your Inbox