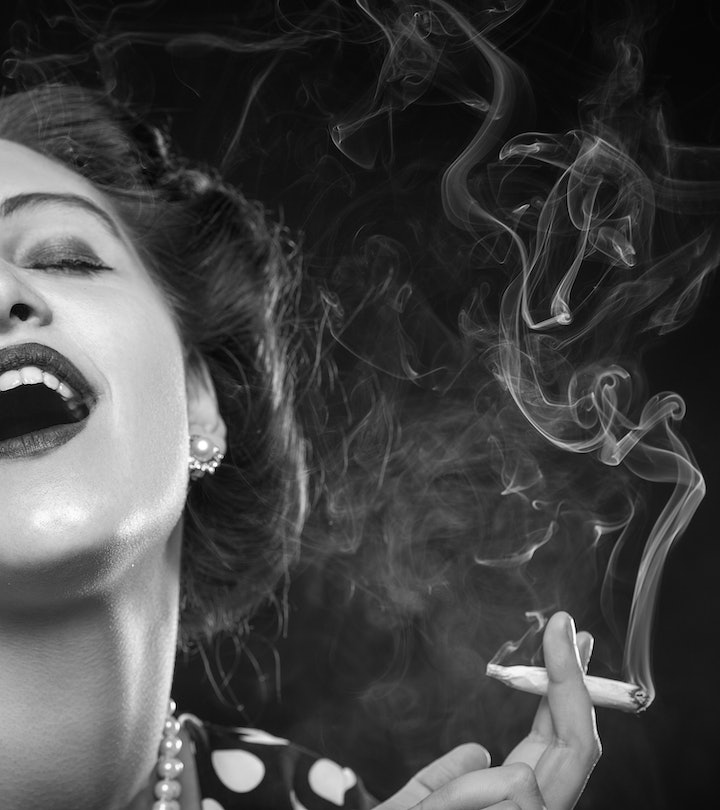 Weed Moms Are Changing The Narrative Around Marijuana

It’s a typical Instagram reel: Overwhelming kids, raucous noise. It’s been a long day. A mom locks herself in the bathroom as The Spice Girls sing in the background, “I’ve given you everything…” And this mom has given everything — her kids have worn her down. But instead of sneaking a bottle of chardonnay out of the linen closet, this frazzled mom lights up a bong.

Melissa Ludwig, an influencer and mom of two in Pennsylvania, is open about her struggle with alcohol, her ADHD diagnosis, and how cannabis is helping. Battling residual pain after a car crash, she hasn’t used narcotics or alcohol — instead, she has turned to medical marijuana to ease her pain and anxiety. “Alcohol makes me a sh*tty-ass human,” she says. “Cannabis makes a better, more controlled, centered, and less pain-riddled me.”

Ludwig is part of a growing group of men and women who are choosing cannabis over alcohol to ease the stress and anxiety of parenting. Some mothers, like Ludwig, eschew alcohol entirely while others find they don’t need their nightly hard seltzer (or four) if they reach for an edible instead. On TikTok and Instagram, hashtags like #highmom, #cannamom, and #potsmokingmom have upwards of 8 million combined views. In the same vein, #sobermom has well over 200 million views.

These social media trends make sense, given data showing that legal marijuana sales increased 46% in 2020 and have continued to rise since. And it’s parents in particular who seem to be leading the way on: A recent Harris Poll found that, over the pandemic, of parents who had already tried marijuana, 52% increased their consumption (compared to 33% of child-free adults). And over half — 57% — of parents who have ever consumed cannabis reported that their use of marijuana replaced or reduced their alcohol consumption.

As cannabis use rises among moms, so does its acceptability in mainstream culture. With the dawn of a new year and many Dry January resolutions, will 2023 be the year that weed moms become the new wine moms? Ludwig and her legions of fellow “cannamoms” think so — and they’re pushing back against the wine mom culture trend that the pandemic kicked into turbo-charged overdrive.

In Weed Mom: The Canna-Curious Woman’s Guide to Healthier Relaxation, Happier Parenting, and Chilling TF Out, author Danielle Simone Brand aims to destigmatize cannabis use for mothers. “We cannamoms advocates compare weed moms and wine moms all the time to make a point about the hypocrisy of it all: alcohol use, which is associated with far greater negative health outcomes, is fun, funny, and totally socially acceptable — while cannabis isn’t.”

Her book works to not only destigmatize but to demystify cannabis culture — and cannabis itself. For example, she says, just like there are different notes and aromas to the wine, various strains of cannabis possess different terpenes (chemical components present in many plants and the essential oils derived from them). As with wine, terpenes can change the product’s flavor, and with weed, its effects. Then there are the different “strains:” some, like indica, are mellowing, while others, like sativa, are energizing. Meanwhile, different methods of consumption, such as gummies, oils, or smoking, change how a user feels. This can be a little overwhelming for new weed moms, particularly those who have been told their whole life that cannabis is dangerous and taboo.

A sampling of tiktok videos that come up searching the hashtag #weedmom.
Weed mom merch abounds on Etsy.Etsy
1/2

So much of the stigmatization of cannabis stems from the 1970s “war on drugs.” In particular, legislation categorized cannabis as a Schedule 1 drug under the Controlled Substance Act, meaning it has a “high potential for abuse, no currently accepted medical use in treatment in the United States, and a lack of accepted safety for use under medical supervision.” While 37 individual states have legalized marijuana either recreationally or medically, this heavy federal classification remains on the books. The truth is, though, that many medical professionals don’t think cannabis research supports this classification. Concerned that this restrictive label is preventing important research on the health benefits of cannabis, they are pushing back.

Among those professionals countering the stigma is Dr. Lynn Parodneck, M.D. As the medical advisor for female-founded cannabis retailer TribeTokes, as well as a private medical marijuana doctor in the New York City metro area, she says this classification is misleading. “Alcohol and THC [the major psychoactive component of cannabis] are both euphoriants. Alcohol can lead to addiction and injure organ systems. It is linked to obesity, liver toxicity, and is used to numb the individual. Alcohol toxicity leads to ER visits and hospitalizations.” She notes that while people can become dependent on THC, it is not physically addictive in the way that alcohol and opiates are. “Cannabis is now being used as an exit strategy for opioids and alcohol.”

What exactly does that exit strategy look like? For many moms, cannabis provides the unwinding they crave without the often disastrous health side effects that alcohol misuse causes. This has proven true for one Buffalo, New York, mom. “I found that cannabis was better for me,” says Brigid Hannon. “There was no hangover or sloppy feelings, it was just a better way to relax at the end of the day.”

Hannon has a chronic illness she realized was exacerbated by drinking — and she was drinking “heavily.” Not into weed as a teen, she became a regular user in her 30s. “I don’t necessarily smoke to get high, I smoke to get normal,” she says of her anxiety and mental health struggles. Hannon is excited to see more social acceptance of weed culture in everyday life, such as groups of adults getting together to get high instead of drinking. “I don’t see any difference between having a glass of wine or smoking a joint. I can’t tell the difference myself, from my own personal experience.”

Not every weed mom experiences the same rise in acceptance that Hannon and other white moms have seen, though. Jamilah Lemieux is a writer and cultural critic. She’s also a Black single mom who uses cannabis regularly, and she knows her weed usage is just one more area where she will be judged more harshly than her white counterparts. Lemieux sees freedom among white moms to talk about their cannabis usage without much fear of backlash. It’s not the same for most Black moms.

“It's incredibly important that we don't allow the mainstream dialogue about marijuana to focus on the happy and free white women and men who get to get high, if not rich, while Black people continue to suffer consequences,” she says. “It's critical that we continue to talk about the legal barriers and cultural attitudes that are used to prevent Black people from consuming as they see fit, as well as how our experiences with marijuana prohibition have helped to power a system of mass incarceration.” There are advocacy groups such as Cannaclusive, with a goal of making cannabis a safe and accepted choice for all folks, regardless of race or background.

Are there risks? Of course. Smoking marijuana carries many of the same risks as smoking any product — namely, the introduction of tar and other remnants of combustion into your lungs. Vaping, one of the most common forms of consumption, uses an electronic battery to heat THC extract to just below the point of combustion. This means the cannabis can be inhaled without actually burning, which is believed to have fewer health risks. One study conducted at Portland State University found the risk of cancer to be up to 200% more probable with smoking compared to vaping.

Will we reach a point where society views weed moms in the same light as wine moms?

“There was ‘vapegate’ a few years ago,” says Parodneck. “People were getting sick from street products. Cheap oils were used that made people sick.” No dispensary products were implicated. “It is not the cannabis, but what is added to it. Purchasing clean products that are lab-tested eliminates this concern.”

Still, some doctors believe we don’t know enough yet.

Dr. Luis Javier Peña-Hernández, M.D., is a pulmonologist in Palm Beach County, Florida. “There is not enough data to determine the risk of cancer like in cigarettes, but there is clear data that shows that [vaping] can cause inflammation at different levels of the lung tissues, which ultimately can cause chronic bronchitis and/or interstitial lung disease." He cites the use of vitamin E acetate, found in many unregulated products, as a significant concern.

A recent Harris Poll found that 57% of parents who have ever consumed cannabis reported that their use of marijuana replaced or reduced their alcohol consumption.

With capsules or gummies, there's no risk of inhaling smoke or chemicals, but it can be easier to over-consume, which itself comes with a host of potential health risks, from vomiting to psychosis. And, of course, when small children are in the house, the adults partaking aren’t the only ones at risk. A new study found that the number of kids in the U.S. exposed to cannabis after accidentally eating an edible rose 1,375% over the last five years.

Ultimately, while the psychological and physical long-term effects of cannabis on the body are still being studied, it’s clear the associated risks for adults are much lower than with alcohol or any other drug. Excessive alcohol use kills more than 140,000 people per year and leaves many more addicted, while no deaths from cannabis have been reported. The sleep benefits of some strains of cannabis, when compared to the highly addictive nature of sleep medications like benzodiazepines, also have some doctors and patients viewing it as a safer alternative for insomnia. The risks, according to women who use cannabis and medical professionals who support it, are so much less significant than with other controlled substances.

Will we reach a point where society views weed moms in the same light as wine moms? Yes and no. The cannamoms believe that eventually cannabis will be viewed as a healthier and less harmful option than wine. They picture an Instagram grid filled with beautiful edibles rather than generous pours of Chardonnay at the end of a long parenting day. “I think weed is going to not only have its moment in the sun again,” says Lemieux, “But that future generations will experience it in the way we do alcohol — widely available, legal, and socially acceptable.”

More Like This
I Had Bariatric Surgery & Can Say The New AAP Guidelines Will Harm Kids
Why You Should Go Ahead And Have That Fourth Baby
I Took Drinking Out Of My Bedtime Ritual & Unfortunately, It's Great
Why Is My Vagina Itchy? Experts Explain
What Parents Are Talking About — Delivered Straight To Your Inbox