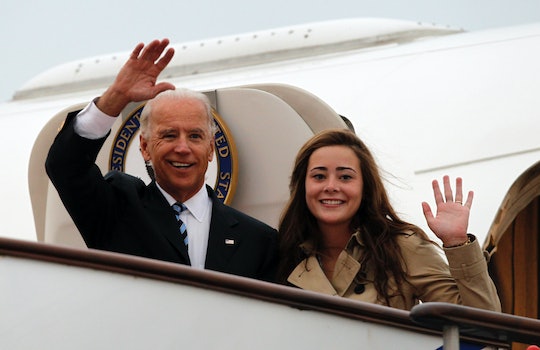 The Biden family had some exciting news to celebrate over the Labor Day weekend. President Joe Biden’s granddaughter Naomi announced that she’s engaged to her longtime boyfriend, Peter Neal.

The 27-year-old, who is the eldest daughter of of President Biden’s son Hunter and one of the POTUS’ seven grandchildren, revealed the happy news with her 182,000 followers on Instagram on Sunday. “Forever,” she captioned a sunlit selfie photo of her and her fiancé while flashing her beautiful engagement ring. Neal, 24, reposted the same selfie on his page, letting the photo speak for itself with no caption.

The newly engaged couple first started dating in 2018, according to Hola!, and it’s clear the couple shares a love of politics and public affairs. While Naomi is a law graduate of Columbia University, Neal is currently attending law school at the University of Pennsylvania. The two may have even crossed paths years before they became an item. Neal interned for Hillary Clinton's presidential campaign and the White House when President Obama was in office, according to Guest of a Guest. Neal also currently interns at the U.S. Department of Justice, according to his LinkedIn page.

While President Biden has not publicly commented on his granddaughter’s engagement, Naomi and her busy “Pop” most likely had a chat on the phone. According to the Associated Press, the president keeps in touch with his family with “nightly” calls.

Naomi — who is named after Biden’s late infant daughter who was killed in a car accident with his first wife, Neilia Hunter Biden, in 1972 — expressed her excitement of having her grandparents in the White House in January interview with the TODAY. “I'm really excited that they'll be just a few miles away from my apartment,” she jokingly shared at the time, “so I can go steal some free food from the kitchen.”

Who knows, maybe she dropped by to share a celebratory ice cream cone with the president.