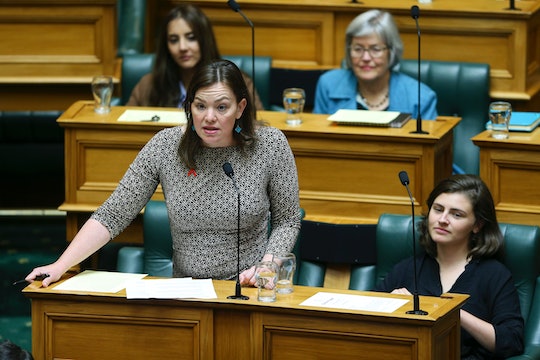 When New Zealand Parliament member Julie Anne Genter went into labor early Sunday morning, she did something not many people having contractions would do: She jumped on her bicycle. Genter cycled to the hospital while in labor, giving birth to her second child roughly an hour later.

“Big news,” Genter announced Sunday on Instagram. “At 3:04 a.m. this morning we welcomed the newest member of our family.”

Although the transportation spokesperson for the Green Party of Aotearoa New Zealand and a general cycling enthusiast, Genter said she didn’t actually intend on riding her bike to the hospital to give birth. “I genuinely wasn’t planning to cycle in labour, but it did end up happening,” the parliamentarian wrote on Instagram.

Genter told the New Zealand news outlet Stuff that her original plan had been to ride to the hospital while sitting in the front of a cargo bike her partner Peter Nunns would pedal. However, when the time came, the couple found Genter and her hospital bag were too much added weight. Undeterred by the development, Genter told the news outlet she “just got out and rode.”

“My contractions weren’t that bad when we left at 2 a.m. to go to the hospital,” Genter shared on Instagram. “Though they were 2-3 minutes apart and picking up in intensity by the time we arrived 10 minutes later.”

The parliamentarian told Stuff she probably had three contractions during her 10-minute bicycle ride to the hospital and another contraction while in the hospital’s car park.

“Amazingly now we have a healthy happy little one sleeping, as is her dad,” Genter went on to share. “Feeling blessed to have had excellent care and support from a great team, in what turned out to be a very fast (and happily uncomplicated) birth.”

But this isn’t the first time Genter has ridden her bike to the hospital to give birth. In August 2018, while pregnant with her first child, The Guardian reported Genter biked to Auckland hospital while 42 weeks pregnant in order to be induced.

“Beautiful Sunday morning for a bike ride, to the hospital, for an induction to finally have this baby,” Genter said on Instagram while sharing photos of her and Nunns cycling to the hospital.

More Like This
Florida Teachers With “Unvetted” Classroom Books Could Face Felony Charges
Michigan Right-Wing Group Wants To Erase LGBTQ+ Sex Ed
Teacher Shot By 6-Year-Old Student Told School He Had A Gun, Was Told To "Wait"
The President Of Ireland Wants To Get Rid Of Homework & Honestly, He's Onto Something
What Parents Are Talking About — Delivered Straight To Your Inbox