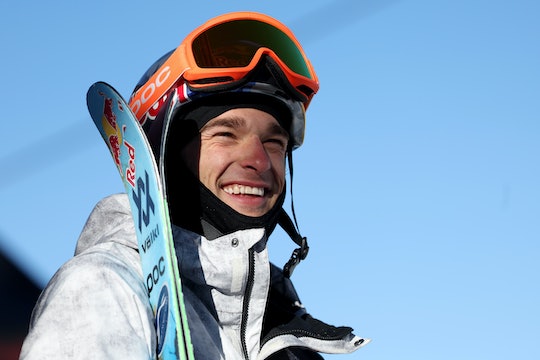 Olympic Skier Nick Goepper Says "The Fam Is Everything" To Him

Team USA freestyle skier Nick Goepper will be returning to the Olympics for the third time. His first trip was the 2014 Winter Olympics in Sochi, Russia, and the 2018 Winter Games in Pyeongchang, South Korea. Next up is the 2022 Beijing Winter Olympics. And through all of his success, his family and wife have been by his side.

Indeed, skiing has always been a family affair for the Indiana native. The 27-year-old athlete told Red Bull he has a backyard training compound at his family home. “It’s reminiscent of what I was doing when I was 14, living in my parents’ house in Indiana,” he said. “So not only is it legitimately good practice, but it’s also inspiring. I feel like I’m bringing back memories from early in my career when I was super young and hungry.”

While they can’t physically be with him in Beijing due to health concerns and safety measures, there’s no doubt his family will continue to cheer him on, including his wife, Lizzy Goepper.

In 2018, Goepper proposed to his then-girlfriend, Lizzy Braun. The two were married the following year in June 2019 in Mammoth California. Goepper shared a sweet Instagram post on their one-year anniversary. “1 year with this one today. 100 more to go,” he captioned the post and added the hashtags, #loveyou, #proudofyou #proudofus.

His Wife Worked With ESPN

As a matter of fact, when the two met, Lizzy was working a “side gig” for ESPN covering the XGames in Aspen in 2016. She told the bridal blog, Gala Lahav, that Goepper was competing in slopestyle skiing. “When I was driving through Glenwood Canyon toward Aspen there was a moment where I stopped and said to myself — this next week will change your life,” she recalled. “Little did I know that change wouldn’t be with my career, but I would meet the love of my life! I kept busy and worked hard without distractions the first couple of days…and then Nick walked into the room, our eyes locked and the rest is history!”

And another lovey-dovey fact about the pair? He proposed to her on a beach in Santa Monica during sunset. Lizzy said the two had never spoke about an engagement. “So to my surprise when Nick dropped to one knee and proposed to spend the rest of our lives together with a mood ring I hugged him and with tears in my eyes I said yes,” she told Gala Lahav. “It was a perfect moment!”

His Family Has Watched Him Play Several Sports

Goepper tried out several sports; from fishing and swimming to football to basketball, cycling and skateboarding. But his family said it was something special about him and skiing. His entire family was in South Korea when he won the silver medal in

His Mom Linda Has Been Supportive Through His Whole Olympic Journey

Goepper’s mother, Linda, has been with him every step of the way, even if that means letting him make mistakes and giving him his space to grow. “I think it’s important to be public and to be supportive for your kid. I had the opportunity, because we live in a small community, to help people,” she said in a 2018 interview with People, adding her advice to parents, as a mother of an Olympian.

“My message to other parents very often is: Stop being that helicopter parent, stop being the snowplow parent and let your kid grow up and let your kid make mistakes, because the only way that they’re going to learn how to deal with adversity in life is if they have practiced adversity,” she told the magazine. “It frightens me to think that they might face a lot of disappointment — like with Nick if he doesn’t win — but the journey is what it’s all about.”

Each year the family takes a vacation together, the Olympian shared on Instagram. Most recently on the coastal shores of North Carolina last August. Goepper shared snapshots of the vacation on his Instagram page and called his family his “everything.”

“OBX with the family,” he captioned pictures over the summer. “Super glad we get to do this every year. The fam is everything!”

In his 2021 Thanksgiving post, Goepper also expressed his love for his family. “Lots to be thankful for this year,” he captioned the post. “I want to emphasize #2. FAMILY. Friends, skiing, passions, country, health, and family again. Grateful for every breath on this earth!”