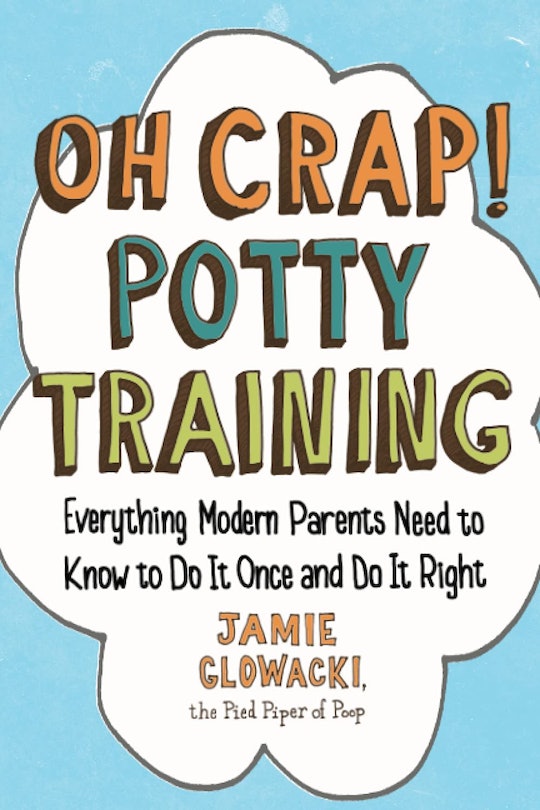 Everything You Need To Know About The Oh Crap! Potty Training Method

Teaching a toddler how to use the potty is equal parts frustrating, exhausting, and humbling (nothing will bust your caregiver ego quite like a defiant 2-year-old who insists on pooping everywhere but the potty). It’s a battle anyone who has raised a child knows well, which is why we often turn to resources and books like Jamie Glowacki’s Oh Crap! Potty Training. The Oh Crap! potty training method has been used for years and for good reason — because it actually works.

What is the Oh Crap! potty training method?

The Oh Crap! potty training method is the simple term that may caregivers use to explain the potty training process found in Glowacki’s book, Oh Crap! Potty Training. Glowacki is a potty training expert who has spent years working one-on-one with families who are struggling to get their child(ren) potty trained. While nothing can compare to working with her personally, Glowacki wrote this book to share some of her best tips with the masses.

The book is laid out in six steps, or skill blocks. Once your child masters one block, then they move on to the next. In an interview with Romper, Glowacki explains that in the book's original release, she included an average number of days kids would usually spend mastering the skills in each block, but she found that caregivers really focused on the number too much and felt discouraged when their child didn’t stick to her schedule. So, when she re-released the book in 2015, she changed the format to these skill blocks.

A lot of caregivers may be aware of the first step in the Oh Crap! potty training method even if they’ve never read the book because it’s so well-known at this point. “I say have your child go commando right away,” says Glowacki. She advises this because “underwear just feels like a thin diaper; it cinches at the waist and legs, so it feels like a diaper to them,” and if it feels like a diaper, then expect a child to treat it like a diaper. Additionally, during the commando stage, Glowacki advocates for a small potty training chair because “you only have a few seconds between when a toddler realizes they have to go and they release it,” so the quicker and easier they can get to the potty, the better.

One thing that really makes the Oh Crap! potty training method different is that Glowacki does not believe in implementing a reward system to incentivize the child to use the potty. “[Using the potty] is a basic human societal thing, and we don’t reward kids for other basic things, like sleeping through the night,” she explains. Additionally, Glowacki notes that “kids this age don’t understand sticker charts and how one week of stickers means a prize” and that she’s seen far too many situations where rewarding kids with some sort of treat then results in a power struggle that caregivers won’t win.

Finally, throughout the process, Glowacki says caregivers should prompt going to the potty rather than ask their child if they need to go. “Don’t ask your child if they need to use the potty [because] they will always say no,” she says. Instead, she suggests prompting your child by saying things like “I’m going to use the potty; do you want to go before or after me?” or “We’re leaving; let’s go sit on the potty.”

Summer 2-in-1 Step Up Potty – Potty Seat and Stepstool for Potty Training and Beyond
Amazon
This 2-in-1 potty training seat and step stool is a major space-saver. The removable pot has a pour spout for easy cleaning, and once your little one is ready for the step stool phase, it's perfect for climbing up on the big toilet or washing hands at the sink.
OXO Tot 2-in-1 Go Potty
Amazon
This travel potty is known for unfolding quickly for on-the-go potty “emergencies,” with legs that lock securely in place vertically for using as a standalone potty. Lock them horizontally, and they can be used as a potty training seat on regular sized toilets. Customers say the seat is made of sturdy, supportive, plastic; 90% of Amazon reviewers gave the travel seat 5 stars. This comes with 3 absorbent bags (to collect deposits), and additional bags ca be purchased.

When’s a good time to start the Oh Crap! method?

“Children are generally ready [to potty train] sometime between ages 18 months and 2-and-a-half years,” Dr. Tanner Walsh, M.D., CLC, FAAP, pediatrician and spokesperson for the Pennsylvania Chapter of the American Academy of Pediatrics (PA AAP) tells Romper in an email. It’s around this age that “[a toddler’s] body has matured enough that they can hold their bowels or urine long enough to get to the potty,” she elaborates.

This advice aligns well with Glowacki’s ideal range, which is between 20 and 30 months. The reason this age range is ideal is due to development. Glowacki explains that there is a lull in brain development around this time, when a toddler has reached major milestones (eating, walking, climbing) and is simply mastering them rather than taking on new ones. Between 30 and 36 months, toddlers start to develop a strong sense of independence, and they often become more defiant as they shout “I do it myself!” on repeat. At this point, Glowacki says, “it’s going to be very difficult to train them” because of the power struggle occurring.

At around 18 months old, kids will also start to develop an interest in the potty, and it’s important to seize that moment. “You may notice that your child may want to follow you into the bathroom and watch what you’re doing,” explains Walsh. “This is a motivating force for children, as they want to imitate your behavior.” When you start to notice them taking an interest in the potty, Glowacki advises caregivers to encourage that interest so that it grows. “If you don’t make a big deal about [the potty], then they won’t either and they’ll lose interest,” she says. “If it’s not important to you, then it won’t be important to them.”

How long does the Oh Crap! method take?

There’s a lot of talk about the three-day potty training method, but while that works for some children, caregivers should not make it their expectation. According to Glowacki, you can expect it to take at least seven to 10 days. She adds, “They won’t master [using the potty] by then, but you’ll be over the hard part of training at that point.”

This process can be really difficult for working parents because Glowacki notes that kids are most successful when there is no disruption to the process, so it’s helpful for parents to take some time off to stay home with their child until it all clicks. If taking a week off isn’t an option, then a three-day holiday weekend is a good place to start, and it’s important to get your child care provider on the same page as you to keep it as consistent as possible.

Glowacki also says that “poop is a real problem” for a lot of kids. (In fact, she has all kinds of resources for poop training on her website for this very reason.) Getting your child to poop on the potty will likely take longer than pee will, and you may notice them holding it in as a result. If your child becomes constipated because of this, or if your child has issues with constipation in general, Walsh says, “you should talk to your pediatrician about potty training, as this can be a little bit of a challenge.”

So, does the Oh Crap! potty training method stand up to the hype? Well, given its 4.5-star rating and tens of thousands of reviews on Amazon, it seems to work for a lot of caregivers. One reviewer, Rosa, wrote, “This book worked for us! We started at 29 months and really committed a full week to being at home as the book suggested. The first few days are hard but a month later my son is having 0 accidents.” Another shopper said, “This book was a great tool for starting potty training. I would have been completely lost without it.”

That’s not to say there aren’t some challenges with this method. As previously mentioned, it’s not easy for caregivers who work outside the home to take the time off necessary for this process. Additionally, Glowacki doesn’t beat around the bush with potty training, so some people may not appreciate how she delivers her advice. (Some reviewers have called it “harsh” or said they didn’t like “the tone of the book.”)

“The key [to successful potty training] is staying consistent and positive,” says Walsh, so if you’re struggling with the Oh Crap! potty training method, don’t abandon it right away. Glowacki points out that “once a book is printed, that’s what it is,” and she wishes her book could be “a living document” that she can update as her experiences and research evolve. Since she can’t release updated books every year, she is very active on social media, where she’s always providing new insights and resources, so if things just aren’t working for your child, see if any of her updates will help before changing things up on your toddler (and possibly confusing them and setting them back).