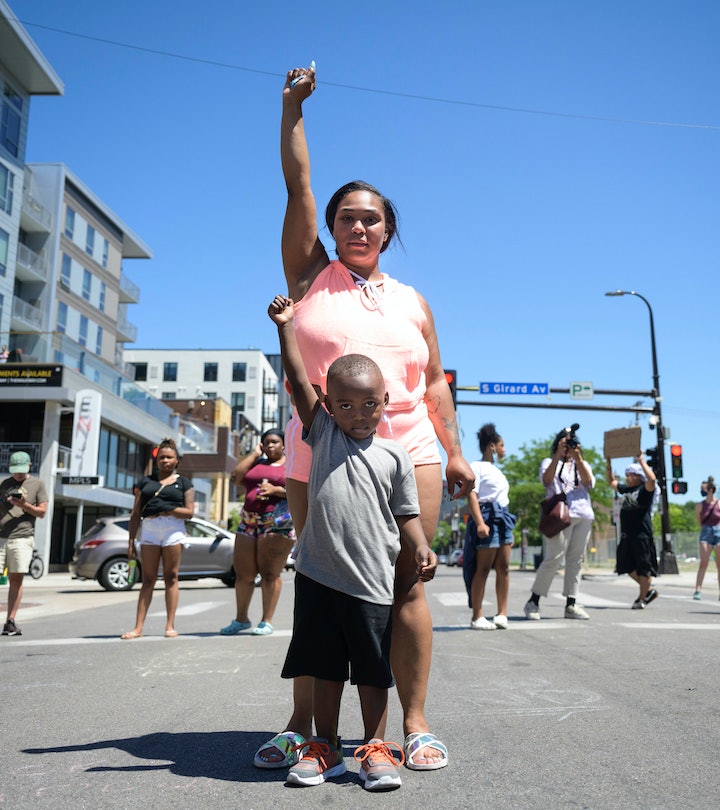 The pandemic was a call to action for parents — and they’re more engaged than ever.

Between trying to keep a job while navigating the hellscape of remote learning and keeping their families safe from a deadly virus, you’d think moms would be the last people to have the time (or emotional wherewithal) to take up a cause during the pandemic. But according to a recent survey of more than 1,000 caregivers, conducted in partnership with Berlin Cameron, Romper, The Female Quotient, and Kantar, not only did parents stay involved in social, civic, and political issues, but nearly 40% of them say they’ve become more engaged and active since 2020. And, they say, it’s because of their kids.

When we look back on the past 15 months one day, most of us will probably remember this time primarily through the lens of the pandemic. And yet, perhaps because of the pandemic, awareness of social inequities and civil and political unrest reached new heights. From protests to insurrections, even when we weren’t involved, we watched it all unfold, often in real time, leaving us not only in the position of having to explain it all to our children, but wondering what we could do to make things better for them.

“The pandemic has really laid bare the huge cracks in our society, and parents have been particularly hard hit,” says Romper’s managing editor, April Daniels Hussar. “We have a front-row seat to what needs to change in our country, and though, as this research shows, there’s a lot to do, I’m buoyed to see how determined parents are to not just ‘get back to normal,’ but to work toward something better.”

For the Rise in Caretaker Activism Research, caregivers between the ages of 18 and 54 were asked how the past 15 months affected their families’ lives, what’s most important to them, how they’ve engaged in their communities, and their hopes (and fears) for the future. The results paint a vivid picture of deeply concerned parents all across the country taking action to effect positive social change.

“With a demanding career and as a mom of two young boys, it’s been challenging to navigate the pandemic on many levels,” Jennifer DaSilva, president of Berlin Cameron, tells Romper. “While the business hurdles are tough, the hardest part has undoubtedly been figuring out how to support my family and myself through the emotional roller coaster of it all. This research revealed that I’m not alone in that thinking. Many other parents and caretakers named mental health as the top issue affecting them.”

Here are some of the takeaways from the research.

Between school closures, social isolation, and fear of a deadly virus, it is no wonder that our collective mental health suffered over the course of these 15 months. Mothers in particular often bore the brunt not only of managing their children’s educations and emotional well-being but of economic consequences as well. But even this very serious issue alone is just the tip of the iceberg. The overlap and interplay between the pandemic and racial discrimination were apparent throughout this crisis. Black and brown families, particularly Black mothers, suffered disproportionately when it came to the pandemic itself and the social and economic results of it.

COVID exposed not only the inequities pervasive throughout our society but widened the chasms between the privileged and underserved. So it’s perhaps not surprising that mental health and racial discrimination grabbed top spots among caregivers, with 40% and 37%, respectively, ranking it among their most passionate issues.

“I was a little surprised to see that only 12% of respondents ranked family leave as a top concern,” says Daniels Hussar. “As we’ve seen, the birth rate is dropping in this country and I think that’s in big part due to everyone seeing how impossible it is to be a working mom!” But, she says, the results make sense when you think about parents being in real crisis mode: “Mental health issues and racial discrimination are literally life-threatening. We want our kids to not be murdered if they get pulled over; we want them not to deal with crippling anxiety and depression exacerbated by social isolation — those are real and present dangers that many families are grappling with. Paid family leave, while vital and connected into issues like mental health, might not feel as immediate in terms of ranking what’s most important to address right away.”

Interestingly, the subject of least concern was voter suppression, with just 8% of respondents saying it was an issue they were passionate about.

With 35% and 20%, respectively, these issues are perhaps nearest to caregivers’ hearts because they are the issues they struggle with the most.

This honesty is just the beginning as we look to spark real change in supporting mental health and caretakers.

Notably, however, while 40% of women cited mental health as affecting them and their families during this period, only 27% of men said the same, coinciding with various reports that the pandemic disproportionately affected mothers.

“While other important issues like paid family leave and gun control are unfortunately ever pressing, these hurdles all feed into an individual's mental state in profound and lasting ways,” says DaSilva. “It’s hard to hear there are so many struggling, yet I find encouragement in how transparent people are about their need for mental health resources in recent months. This honesty is just the beginning as we look to spark real change in supporting mental health and caretakers.”

Between the sexes, the survey showed general parity when it came to issues caregivers felt most passionate about; respondents were usually within 10% of one another when it came to issues like poverty and homelessness (both 25%), and LGBTQ+ rights (16% of women; 12% of men). The starkest difference was in regard to women’s health and reproductive rights, which was an issue 30% of women were passionate about, as opposed to just 10% of men.

Action Starts At Home (And The Ballot Box)

Caregivers said that when it came to taking action on the issues, voting was king – 64% voted in an election. Other actions were largely things that could be done at home, including educating themselves about a social or political topic (43%), signing a petition (39%), or educating others about a cause (26%).

Social Media Is A Catch-22 When It Comes To Activism

Sharing information on social media was also a relatively common way to take action among respondents (23%), likely due to the fact that 13% felt they could make the most impact via their social media accounts. However, 73% of caregivers believe social media made it easier to share fake or incorrect information on political or social issues, and, certainly, evidence supports the idea that misinformation, from anti-vaxx diatribes to Q-Anon conspiracy theories, finds fertile ground on social media. (And, anecdotally, don’t we all have that one friend whose feed is basically a fact-checker’s worst nightmare?)

When it came to selecting the one most trusted source of information about the causes and issues they care about, caregivers are slightly more likely to choose their family members or a partner (17%) than experts in the field (13%) or scientists (8%).

Children Are Parents’ No. 1 Motivator When It Comes To Activism

Respondents were most likely to be motivated to action because they want things to be better for their children (30%) and, indeed, the biggest issues caregivers believe their children may face (racial discrimination, 18% and mental health, 10%) align with the issues they are most passionate about addressing.

51% of caregivers say they care more about social, civic, or political issues since becoming a parent.

Despite the fact that many respondents were overwhelmed by the idea of getting involved in activism (43%), 69% believed that activism is a powerful tool to create change. They also believe (31%) that people like them are the most capable of making meaningful social, civic, and political change. Government and political parties were also seen as capable of effecting change (28%), though women were more likely to have faith in government than men (31% vs. 22%).

Parents Weren’t Likely To Identify Themselves As “Activists,” But They Might Be Getting There

Slightly less than a third of respondents (31%) considered themselves activists. However, 51% said they cared more about social, civic, or political issues since becoming a parent and 37% said they have become more active since 2020, with 41% longing for more time to get involved with activism and 37% planning to be more involved in the next year.

“The research showed that above all else, people see themselves as the ones that can effect change,” says DaSilva. “While institutions including governments and major corporations do hold powers, individuals are finding it’s their own voice and action that create real change. If we come together as people, we can shift the tides from the bottom up.”

Methodology: Berlin Cameron, in partnership with Kantor, The Female Quotient, and Romper, conducted a total of 1,003 self-administered online interviews among female and male caretakers aged 18-54 in the United States. Interviewing was conducted May 2021. All interviews are geographically representative and ethnically diverse.

Top photo caption: June 4, 2021: Starr Patterson stood with a child as they raised their fists in the intersection of West Lake Street and Girard Friday afternoon as protesters shut down traffic near the site of the shooting death of Winston Smith in Uptown.