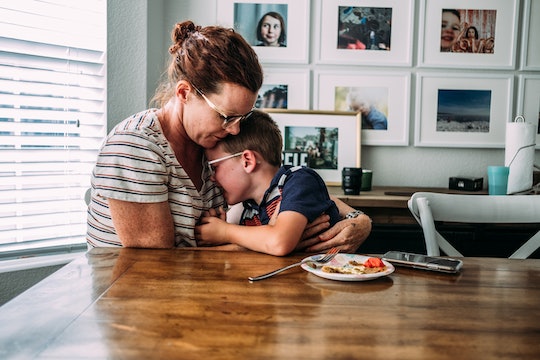 As the coronavirus pandemic continues to see people unemployed, on the frontlines, or working from home across the country, there is one part of the population who is significantly struggling. A new study has shown that working moms' careers are taking a hit during the pandemic and it could have consequences long after this health crisis has passed.

A new study conducted by three universities — Washington University in St. Louis, the University of Melbourne in Australia, and the University of North Texas — culled data from 60,000 households across the United States via a monthly labor statistics survey. Researchers sought to determine how parents were coping with working from home alongside childcare and domestic duties. And the results, first published in the online journal Gender, Work and Organization in July, were distressing.

Researchers found that between March and April working moms saw their paid time scaled back an average of four to five hours per week, while working dads in heterosexual partnerships who were surveyed did not see their hours scaled back at all. Additionally, mothers of school-aged children or very young children tended to see their work affected the most. Specifically, according to the study's findings, the gender work gap has increased by 20 to 50% since the outset of the pandemic, and mothers of children under the age of 13 had a larger number of reduced work hours than fathers.

"Our findings indicate mothers are bearing the brunt of the pandemic and may face long-term employment penalties as a consequence," study co-author Caitlyn Collins of Washington University, told The Source, her university's newspaper.

So why are these working moms seeing their hours scaled back while their partners are largely able to continue to work from home as normal? Collins explained to Science Daily it's an issue of gender inequality. "Even among households in which both parents are able to work from home and are directly exposed to childcare and housework demands, mothers are scaling back to meet these responsibilities to a greater extent than fathers," Collins told Science Daily. "Ultimately, our analyses reveal that gender inequality in parents' work hours has worsened during the pandemic."

Working reduced hours could see long-term effects for these moms, who could potentially be penalized by their employers and unable to meet inflexible work schedules. Earlier this month, in fact, a mother of two in California has filed a lawsuit agains her former employer, alleging that she was fired her because her young children were too noisy during work calls and her managers were ere "tired of accommodating" her.

A recent New York Times op-ed entitled "In The COVID-19 Economy, You Can Have A Kid Or A Job. You Can't Have Both" also recently went viral after calling out the struggle for moms during the pandemic. As author Deb Perelman wrote, "We are burned out because we are being rolled over by the wheels of an economy that has bafflingly declared working parents inessential."

This most recent study seemed to draw much the same conclusion, and offered examples of how managers and fathers can help a generation of working moms cope with both parenting and career responsibilities.

"Childcare demands and increased homeschooling expectations are likely to linger in many states into the next school year. To avoid long-term losses in women’s labor force participation, employers should offer flexibility to keep mothers attached to employment, including allowing employees to work shorter hours," researchers concluded in their study. "Further, fathers should be encouraged to provide more hours of care for their children, which may mean sacrificing paid work hours to do so."