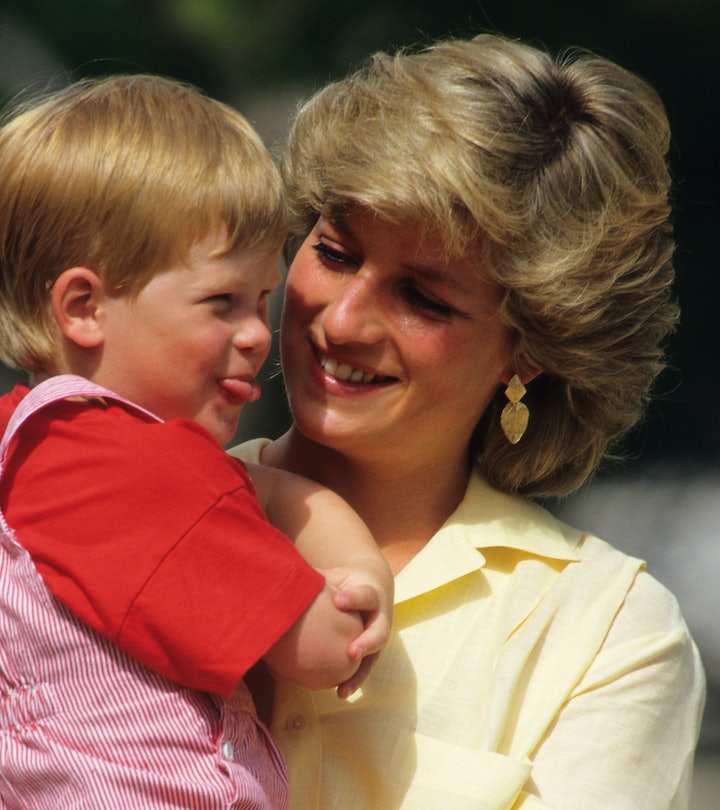 The Duke of Sussex apparently wanted "mummy's ring" to one day sit on the throne.

If only we all had a sweet brother-in-law like the Duke of Sussex. Apparently Princess Diana's engagement ring first went to Prince Harry, who offered it to his brother when he was proposing to Kate Middleton. Considering that ring is perhaps one of the most iconic pieces of jewelry in the royal family (outside a bevy of tiaras, of course), that is truly an incredible and sweet gift.

According to Paul Burrell, Princess Diana's former butler and confidante, Prince Harry inherited his mother's sapphire engagement ring when she died in a car crash in Paris in 1997. The ring, a 12 carat oval blue Ceylon sapphire surrounded by 14 diamonds designed by crown jeweler Garrard, was given to her in 1981 when Prince Charles proposed. Well, the ring was given to her by Prince Charles after he proposed; she chose the ring herself after the fact, according to Oprah magazine.

When Prince William was gearing up to propose to his longtime girlfriend in 2010, Burrell explained in the Amazon Prime documentary The Diana Story that it was Prince Harry's idea for his older brother to offer their mother's famous engagement ring to her. Burrell recounted that the young royal, who was single at the time, thought it would be "fitting" if Middleton wore Princess Diana's ring. According to The Sun, Burrell recounted, "Harry said to him: 'Wouldn’t it be fitting if she had mummy’s ring? Then one day that ring will be sat on the throne of England.'"

As for Prince William, giving Middleton a ring from his mother helped to keep him feeling close to her when she couldn't be around for his engagement, as he said in a 2010 interview with Sky News. "Obviously, she’s not going to be around to share in any of the fun and excitement of it all, so this is my way of keeping her sort of close to it all," the Duke of Cambridge said at the time.

Prince Harry himself would go on to get engaged seven years later, and when he proposed to his now-wife Meghan Markle in 2017 it was with an elegant ring he helped to design with jewelers Cleave & Company, according to Harper's Bazaar. His decision to pass that special ring from his mother along to his brother was, as Burrell explained in the documentary, reminiscent of the woman herself. "Harry gave up his precious treasure," Burrell said. "His one thing he kept from his mother, he gave to his brother. That’s selfless, kind and exactly who Diana was."

The past year has seen some distance grow between the two brothers, geographically at the very least. Ever since Prince Harry and Markle stepped down from their senior royal roles and moved to California, rumors have swirled about a growing rift between the two brothers who were always so close. But before then, there was apparently a time when Prince Harry parted with a special heirloom for his brother, for his new sister-in-law.