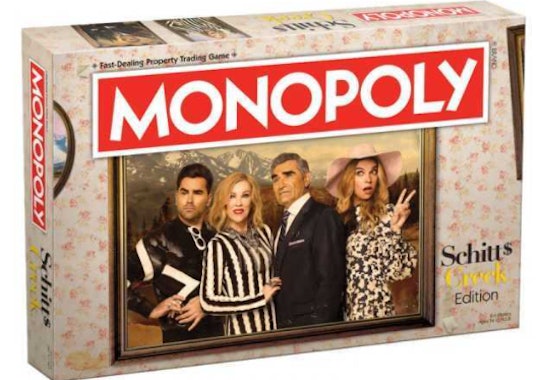 'Schitt's Creek' Monopoly Is Here For All You Destitute Millionaires

You can play with Moira’s wigs.

If you’ve ever wanted to wander the streets of Schitt’s Creek, stopping in for a coffee at the Cafe Tropical or perhaps enjoying a little drink at the Herb Ertlinger Winery, now is your chance. Sort of. There’s a new Schitt’s Creek Monopoly game available just in time for all of those holiday family game nights, and it truly looks like a blast.

Hasbro has come out with a Schitt’s Creek edition of Monopoly, which really should be attributed to icon Moira Rose, who noted in an episode of the show that she and her family “would have a virtual monopoly on this town.” Anyone who watched the beloved Canadian television series knows that the Rose family did, indeed, have a monopoly on the town. So why not have a game of Monopoly to celebrate, right?

Schitt’s Creek Monopoly is available to purchase for $39.99 from The OP Games, and it features all of the best elements of the Emmy award-winning series for 2-6 players. For instance, the six playing tokens players can use are Bébé Crow, Patrick’s Guitar, Rosebud Motel Key, David’s Sunglasses, Ted the Turtle, and Moira’s Wig.

Schitt’s Creek shared the game on Instagram with the message, “(it’s real, you can buy it)” so now you know it’s not all a glorious fever dream. You really can play a game where you “join the Rose family on opportunistic adventures as you buy, sell, and trade popular locations from the show, including The Rosebud Motel, Bob’s Garage, Herb Ertlinger Winery and more,” per the game’s description. You can choose cards from the “Hello You” and “Love That Journey For Me” decks in the game, rent Roland’s truck for $25, or you might get stuck paying your mortgage to Ray Butani Inc. if you get in over your head.

We were all heartbroken when Schitt’s Creek came to an end, of course. Not just because we would miss David and Moira and Alexa and Johnny but also because of the town. The ambience. The overwhelming feeling of bonhomie that always came from a visit to Schitt’s Creek. Now you can have that warm good feeling again.

In your own house. During game night. I really do love this journey for you.