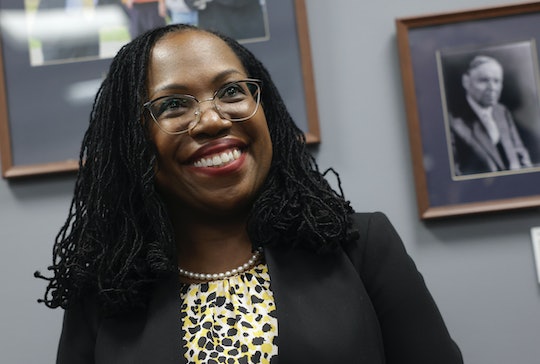 "In our nation's history, she is the first Supreme Court Justice who looks like you — with hair like yours."

When Judge Ketanji Brown Jackson was officially confirmed as the newest member of the Supreme Court on Thursday, it was a historic day. She is the first Black woman to ever sit on the bench of the highest court in the land, a former public defender, a working mother. It was an emotional moment for millions of people who watched Jackson handle a difficult round of confirmation hearings with grace and dignity, to see her finally be confirmed. And one senator wanted to capture the moment for posterity. Sen. Raphael Warnock from Georgia wrote a letter to his daughter about Jackson’s SCOTUS confirmation after Vice President Kamala Harris encouraged him to do so.

Sen. Warnock shared a letter he wrote to his young daughter Chloé, who he co-parents with ex-wife Ouleye Ndoye, that he wrote in response to Jackson’s confirmation. “Dear Chloé, Today, we confirmed Ketanji Brown Jackson to the United States Supreme Court,” he wrote in his letter, which he shared on Twitter. “In our nation's history, she is the first Supreme Court Justice who looks like you — with hair like yours.”

Warnock went on to note that Vice President Harris gave him the idea to write a letter about this moment. “While we were voting on the floor of the Senate, a friend of mine — the Vice President of the United States handed me this piece of paper and suggested I write a note to someone who comes to mind,” he explained. “By the way, she is the first Vice President who also looks like you! So, I write this note to say you can be anything, achieve anything you set your head and heart to do! Love you! Dad.”

Sen. Warnock was certainly not the only senator to be moved by Jackson’s confirmation. When Vice President Harris made the announcement, the Senate floor broke out in (mostly Democratic) applause. And of course, Sen. Cory Booker, who Harris also encouraged to write a letter to a young Black woman about Jackson’s confirmation, has made his joy over this historic day known for some time. At a particularly fraught time during Jackson’s confirmation hearings, Booker reassured Jackson by saying, “When that final vote happens, and you ascend onto the highest court in the land, I’m going to rejoice. And I’m going to tell you right now, the greatest country in the world, the United States of America, will be better because of you.”

On the day of Jackson’s confirmation, Axios reported that Harris gave both Warnock and Booker a piece of stationary to write a letter about that moment to a young Black woman in their lives. “I thought it was a beautiful gesture,” Booker told reporters of the moment.

Jackson is already inspiring people. From this generation and the next.