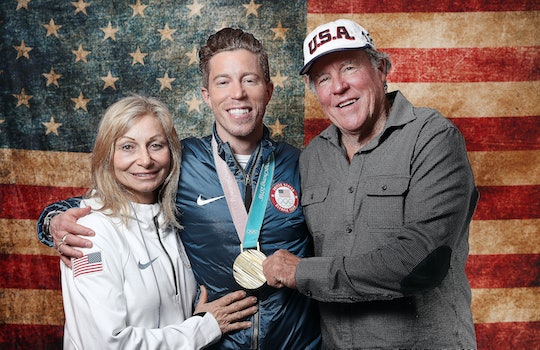 Shaun White Says His Parents “Really Made Me Who I Am”

From multiple surgeries as an infant to sleeping in a van at the base of San Bernardino Mountains, the Olympian’s parents have stood by him every step of the way.

As the world waits for the 2022 Winter Olympic Games to come to Beijing, China, one athlete has reportedly been contemplating his own relationship with the Olympics. Snowboarder Shaun White has won three Olympic gold medals in his sport, and told Rolling Stone that he “definitely” wants to retire after the new Games. It’s been a long ride for the athlete, and one he has not taken alone. Shaun White’s parents, Roger and Cathy White, have supported him since he first became interested in the sport as a kid, and their journey together has been a real testament to their love for each other.

When White was born in 1986 in San Diego, California, he was diagnosed with a rare heart condition that was comprised of four congenital heart defects, according to Stanford Children’s Health. By the time White was 1 year old he had undergone two life-threatening surgeries. White discussed his condition with Jimmy Kimmel when his own son Billy was diagnosed with the same congenital heart defect in 2017. “It was a similar situation; I was slowly turning blue and my parents knew something was up and the doctors came in and found out it was the scenario, the heart condition.”

He’s The Baby Of The Family

White first discovered his love for skateboarding when he was just a little boy after he followed his older brother Jesse, who is seven years older than Shaun, to the YMCA to watch him skateboard. All three of the White kids, including sister Kari who is two years older than Shaun, were raised with a love of sport that came from their parents. As for Shaun, he was showing promise as both a skateboarder and a snowboarder by the time he was 6 years old. So much so that his parents built a ramp in their backyard for him to practice, according to The New York Times. Their investment in their son’s talents didn’t stop there.

Cathy White worked as a waitress while her husband Roger worked for the San Clemente water department. Snowboarding is famously an expensive sport, and yet these parents found a way to make sure their son could spend as much time as possible on the mountain. They bought a van, which the whole family slept in at the base of the San Bernadino mountains on winter weekends, brushing their teeth in the resort bathroom and snowboarding whenever they could together.

“We all ride together and take the same lines. Snowboarding together is such a great bonding experience for us,” Cathy told Mountain Zone.

Shaun White’s parents slept in a van to help their son’s career.

His Parents Are Athletes, Too

It makes sense that White would be such a natural as an athlete; both his parents are athletes as well. In fact, mom Cathy’s parents were both noted roller derby stars themselves, with both of them racing on the pro roller derby circuit on the L.A. Bombers and T-Birds. As for dad Roger, he was a talented surfer in the ‘60s and was apparently hoping his son would lean that way as well at one point, per the San Diego Union Tribune.

“Shaun was supposed to be a surfer,” Roger White told the newspaper. “I wanted to be a surfer, and my dad was never behind me. I was hoping to get Shaun into surfing. I put him on a boogie board when he was really young, about 4 years old.”

He Was Sponsored When He Was 7 Years Old

Cathy and Roger White took Shaun to snowboarding competitions whenever they could, and the young prodigy was sponsored by Burton by the time he was seven years old. By the time he was 14 years old, he was competing professionally and went on to compete in his first Winter X Games in 2002, winning eight medals.

His Parents “Made Me Who I Am”

All these years later, White is considered one of the most influential athletes in the world with millions of dollars in sponsorship deals. And he knows exactly who he has to thank for it all: his parents. “My parents are the ones that really made me who I am,” White told Kimmel in 2017. “Obviously, they didn't put these limitations on me. It was obviously explained, 'Hey, this is what happened. You should be cautious.' But it wasn't this, like, hovering over me to make sure I wasn't getting into trouble or working out too much or doing anything too active. But they really let me find my own limitations. So, that's kind of why I feel like I'm so athletic now and just did whatever I wanted to do because they never put that limit on me.”

While his parents can’t be on hand in Beijing to watch White snowboard starting on Saturday, Feb. 5 at the 2022 Winter Olympics, they’ll most certainly be watching from home. And just as they’ve always done, they’ll be cheering him on every step of the way.