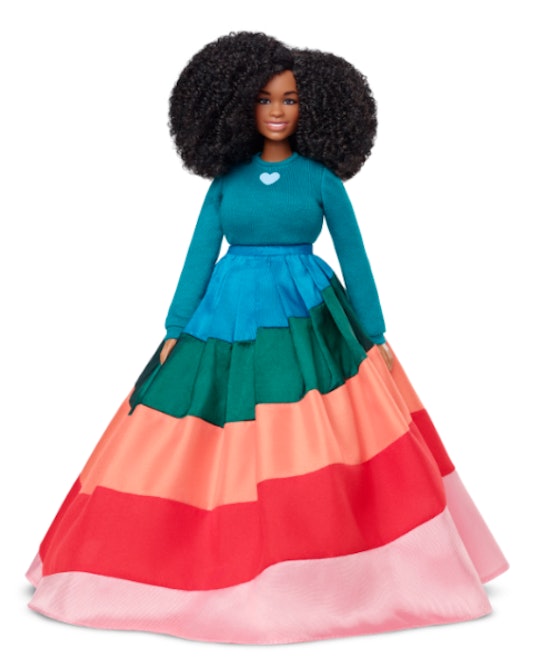 Shonda Rhimes is a writer, CEO of a global production company, Shondaland, and one of the most renowned storytellers. She’s often laughed in interviews at remembering how she created her first hit television show while in bed with her laptop and PJs on. Since then, she’s gone on to win a much deserved place in the Television Hall of Fame, and many other awards, with an ever-growing list of new groundbreaking shows that keep us all entertained. This International Women’s Day, Mattel is launching a global Barbie campaign with a collection honoring female role models, including a one-of-a-kind Barbie of Shonda Rhimes as the female leader in her industry represented from the United States.

In an interview, Rhimes says, “Dolls give you an ability to imagine yourself in a different way.” Having a doll with a backstory isn’t anything new. But when that narrative is connected to a real-life story of feminine power, trusting yourself and realizing what is possible, it can profoundly impact a child.

So what does this really mean for girls who look like Rhimes?

Researchers in the Mattel camp discovered “girls aged 5 to 10 are less likely to raise their hand for leadership positions, such as stepping up to be in charge of a group activity, due to perceived social backlash from volunteering to take on more responsibility.” But Black girls have an added layer of discrimination to their experience because of racism. Those who don’t shy away from speaking up and are sure of themselves are often mislabeled as loud, disruptive, or aggressive, and acts of systemic racism are an attempt at silencing them or keeping them in their place. Confidence in a Black female is not a character trait historically praised nor appreciated by white America. But Shonda Rhimes, in her own right, is a rebel against this system. And her power to embrace all of who she is, including her immense talent for telling stories, is a model of resistance for Black girls.

Inspiring Girls International, an organization that connects girls with female role models, has partnered with Barbie’s Dream Gap Program for this launch along with a global mix of female entrepreneurs, including makeup artist Pat McGrath representing the United Kingdom, founder of All4Spas Adriana Azuara representing Mexico, and fashion designer Lan Yu representing China. A curated shop featuring female-founded businesses is another leg of the campaign, and 5% of the proceeds, until March 31, will go to Dream Gap. Mattel will match the proceeds to further support their efforts to identify the barriers that BIPOC girls face and partner with community groups working to address and end those issues.

And especially fun? Rhimes’ doll is wearing the Carolina Herrera outfit that she wore on the Variety magazine cover when she was selected as Show Woman of the Year. An accomplishment in itself.

When Rhimes stepped on the scene, she changed the face of television. Her stories include a diverse group of characters, and all of them have Black women in some leadership roles. Her deliberate casting has broken many racial barriers, giving us a fresh look at seeing brown-skinned women exhibit intelligence and artistry as they brilliantly show off their craft. They were always there, but Rhimes was the hand that pulled them to the front when many of them were passed over for lighter-skinned actors.

This doll is an opportunity for the next generation to understand how her work is normalizing not only women in leadership, but Black women being in the forefront without having to deny their blackness.

Understanding the impact that representation can have on girls at such a young age also means grasping why this replica of Rhimes is essential. Diversity and inclusion, which Rhimes outspokenly advocates for, should be an everyday experience. And girls, no matter their race, should be able to freely imagine and pursue taking the lead in any industry or path they choose.

More Like This
Anthony Anderson Thanked His Son For Inspiring Him To Finish His College Degree
Dwyane Wade Shares Beautiful Advice For Parents Raising Transgender Children
19 Gifts College Grads Will Love & Actually Use
From Captions To Gifts, These Are All The Kindergarten Graduation Ideas You Need