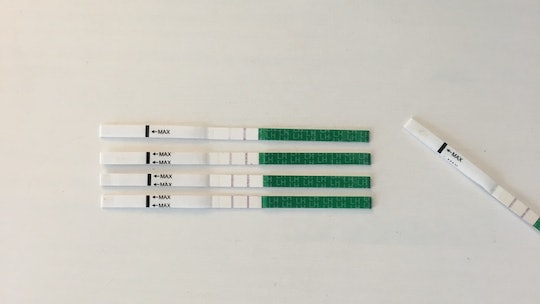 Here's How Often You Should Test For Ovulation During The Day, According To An Expert

For some people, trying to conceive (TTC) just looks like having sex, then you get pregnant. For many others — which is something that definitely needs to be talked about — it requires a lot more than that. As someone with polycystic ovarian syndrome (PCOS), it took me a long time to get pregnant, and it took a lot of ovulation testing, fertility planning through an app, taking special vitamins, and other medications to help with my fertility. While TTC with PCOS, I had so many questions swirling around my head: Should I take ovulation tests twice a day? When is my fertile window? And when should we have sex to get pregnant? Thankfully, whether it was from taking Mucinex, prenatal vitamins, Metformin, and tracking my ovulation with strips, and tracking my fertile window with an app — or all or none of the above — I finally got pregnant.

According to Dr. Peter Rizk, a women’s health and fertility expert with Fairhaven Health, most women should be OK to test just once a day — however, if you have a short luteinizing hormone (LH) surge, you could miss it. And LH is a hormone that helps your reproductive system, according to WebMD. “If you don't see a clear positive test when testing once a day, we recommend that you try testing twice a day to see if you can catch that surge. Try to avoid testing with first morning urine because it's concentrated and may give a false positive. Any other time of day is suitable. For best results, try to test at approximately the same time each day,” Rizk tells Romper.

If you have PCOS, it may make sense to test twice a day. Rizk says, “An estimated 10 percent of women of childbearing age have PCOS, making it a leading cause of infertility. Women with PCOS may get a false positive from the test strips given hormonal imbalances they experience. Their ovaries do not produce sufficient hormones and the egg or ovum may not mature. This will cause a couple of issues: ovulation does not take place and the reproductive hormones are thrown out of balance, making it difficult to accurately predict ovulation with strips, which test for LH."

Even still, strips can be challenging for women with PCOS, Rizk says. “For these women, trying an ovulation prediction device like the OvaCue Fertility Monitor with a saliva sensor, and a cervical mucus sensor, are ideal ways to pinpoint your most fertile days in your cycle and confirming when ovulation occurred.”

Otherwise, Rizk says it’s definitely easier to become pregnant when using ovulation strips. “The more educated you are about your cycle the better, especially when you’re trying to get pregnant. There are only four or five days each cycle one can conceive, so determining these fertile days is of great importance.” As far as accuracy, Rizk says most strips and tests are usually around 99 percent accurate, but it depends on the brand. “One of the best options on the market are BFT, which exceeds 99.9% accuracy."

So for most women, you probably don't need to test twice a day if you haven't had issues with fertility or have PCOS. But if you don't see a clear positive test when you're testing once a day, it wouldn't hurt to test twice so you can try to catch that LH surge window. Good luck!

More Like This
My Fertility Journey Began In A Cold Doctor’s Office, But It Was Also Weirdly Romantic
Yes, It’s Possible To Get Pregnant If You Have An IUD
Pelvic Pain During Pregnancy: What Causes It & How To Deal With It
Here’s Why Your Vagina Itches At Night, According To Experts