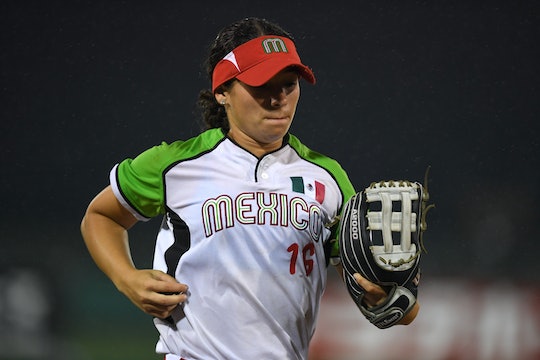 If you’re a sympathetic crier, please brace yourself before watching Tatyana Forbes’ dad Robert getting super emotional about seeing her compete at the Tokyo Olympics. Robert Forbes had a difficult time holding it together when he talked about how proud he was of his daughter’s journey to playing on Mexico’s Olympic softball team, and you’ll have a difficult time holding it together too. I promise you that.

Tatyana Forbes was a softball player for North Carolina State University who qualified to play for Team Mexico at the Tokyo Olympics, the first time Mexico has competed in the sport. A huge moment in the young woman’s life.

“Playing for Team Mexico has been an unbelievable experience,” Forbes told Go Pack. “Over the last five years, I have got to represent my family while traveling to different countries all over the world. There's nothing better than that. I have worked my whole life for this moment, and I could not be more blessed to have the opportunity to go to the Olympics in Tokyo!”

She’s not the only one feeling blessed. Forbes’ dad Robert spoke to Chris Egan for King 5 TV, wearing a Mexico baseball cap, about watching his daughter fulfill her dream to play for Team Mexico. And he was fighting back tears the entire time.

“It’s just... the fact that she’s there. All the sacrifices. I mean, you can tell by my reaction,” he said. “I’m just happy for her, you know? Just the person that she is. I couldn’t have asked for a better daughter.”

Robert Forbes is super proud of his daughter Tatyana.

Several social media users found themselves getting emotional over Robert Forbes’ interview, with one writing, “That is wonderful, what a fantastic moment to capture,” while another wrote, “This moment and this video!!!! I’m so excited for your family.”

But perhaps no one was more moved than Tatyana Forbes herself. “Well I have been trying to get past the first two seconds of watching this for the last hour,” she wrote on Twitter. “THESE are the moments that make it all worth it, I love you so much Dad Blessed to have the most amazing and supportive family!”

This year’s Olympics are especially difficult and emotional for families of the athletes. They are not able to cheer for them in the stands. They won’t be with them for emotional support due to COVID-19 safety restrictions. But, much like Robert Forbes, their families are watching them. Supporting them. There for them.