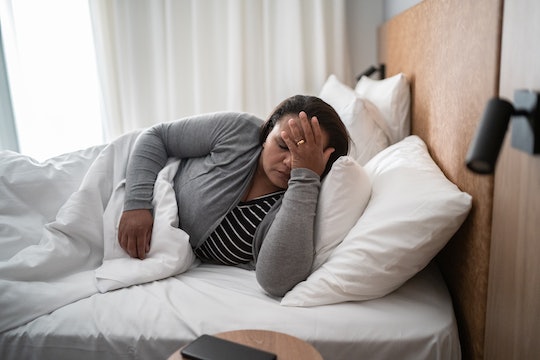 This isn’t a condition you want to overlook.

If you’ve never heard of thyroid eye disease (also known as TED), you’re not alone. TED is a rare disease that isn’t talked about as often as it probably should be, and often accompanies other thyroid conditions, especially Graves’ disease. While thyroid disease and even postpartum thyroiditis are more commonly mentioned, knowing about thyroid eye disease is equally important.

TED is a condition that occurs when your immune system mistakenly attacks the muscle and fat tissue behind your eyes. It can cause inflammation and scar tissue to form on the eyes, which can lead to a host of unpleasant changes to the area, like eye bulging and double vision. Because it’s usually part of Graves’ disease, you may hear TED being called something else, like Graves’ eye disease or thyroid-associated orbitopathy (TAO). If left untreated, TED can cause serious damage.

It’s important to be on the lookout for these symptoms, because TED can get a lot worse when left untreated, and the last thing you want to do is seriously mess with your vision.

If TED is left untreated, more serious symptoms can include:

You might notice that a lot of these symptoms could be from, well, just feeling really exhausted. So how can you differentiate between tired eyes and TED? Dr. Gary Lelli, oculoplastic surgeon and TED Specialist at Weill Cornell Medicine in New York, tells Romper, “TED symptoms are usually more intense than things we’d consider general tiredness.” If you only have dry eyes sometimes, that doesn’t mean you have TED, but if you also have bulging eyes, pain or pressure, and eyelid retraction, then definitely speak to a doctor.

If you think you might have TED, you should be tracking your symptoms. Horizon has a really helpful TED Symptom Survey that makes it easy for you to know exactly what signs to look out for. You should also write down your symptoms as they occur and even take selfies of your eyes as visual proof of any changes.

Who Is At Risk For Thyroid Eye Disease?

Graves’ disease is an autoimmune disease that affects the thyroid. The thyroid is the butterfly-shaped gland at the base of the neck, and it’s part of your endocrine system, which includes glands that secrete hormones to regulate your metabolism, and a lot of really important bodily functions. Graves’ disease means that your thyroid is abnormally large and secretes too many hormones (this is also called hyperthyroidism).

“TED also occurs among those with Hashimoto’s or hypothyroidism, or neither diagnosis,” Dr. Lelli adds. “Women are more at risk, though men tend to experience symptoms of TED more severely. Smoking also increases the risk of developing TED. TED can affect people of all ages, though most people typically present with TED between the ages of 40 to 49 and 60 to 69.”

There are two phases of TED: the acute phase and the chronic phase. The acute phase is also known as the active phase, which is when symptoms appear and start to get worse. It can last anywhere from a few months to a few years.

The chronic phase of TED is often referred to as the “inactive” phase. This is when your symptoms might just kind of hang around, not getting worse and sometimes even disappearing. Signs you’re in the chronic phase include swelling that has stopped or slowed down, redness that has gone away, and eye bulging that hasn’t gotten worse.

How To Diagnose Thyroid Eye Disease

One of the frustrating things about TED is that it so often goes misdiagnosed. Sometimes it just gets overlooked, especially if your symptoms are really mild. According to NORD, doctors typically look for TED if you are a patient who has been diagnosed with hyperthyroidism — but, sometimes, the symptoms of hyperthyroidism aren’t present with TED, which means that doctors might not even think to check for TED.

To be diagnosed, doctors have to examine your eyes and find swelling and enlargement of the eye muscles, which they can do through tests like a CT scan or MRI scan. A complete eye examination should be enough to tell you if you have TED.

If you feel like your doctor is dismissing your concerns about TED, Dr. Lelli recommends going to an eye specialist like a neuro-ophthalmologist or an oculoplastic surgeon. “Not all doctors have experience with TED, so be sure to find one that does,” he says. “If you notice changes in your eyes, like eye bulging, pain or double vision, monitor those symptoms and report them to a TED Specialist. To find one near you, visit FOCUSonTED.com.”

“If not treated early, TED could cause serious damage to both vision and appearance of the eyes,” Dr. Lelli warns. “TED can even cause blindness in more severe cases. The sooner you are evaluated by a specialist, the better.”

Fortunately, TED can be treated once it’s been diagnosed. Here are some things doctors can recommend to make the side effects less uncomfortable and improve the condition:

According to the American Thyroid Association (ATA), some things you can do on your own to make the side effects less uncomfortable include using cool compresses on your eyes for relief, wearing sunglasses to avoid potentially painful sun exposure, and elevating your head while sleeping to reduce swelling and pressure.

So, remember: if you’re dealing with hyperthyroidism or Graves’ disease, don’t blow off any eye issues you might have. TED doesn’t have to be a serious condition that potentially leads to vision loss, but it can be if it doesn’t get treated. It’s always better to be aware.

More Like This
Why Is My Vagina Itchy? Experts Explain
I Had Bariatric Surgery & Can Say The New AAP Guidelines Will Harm Kids
The Personal Training App That Made Me Love Working Out Again
Your Guide To Love Languages: Words Of Affirmation
What Parents Are Talking About — Delivered Straight To Your Inbox