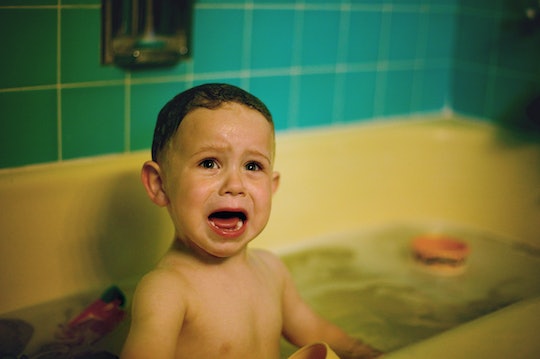 Why Your Toddler Is Suddenly Afraid Of The Bath

Maybe they figured out that bath time also means bedtime.

Julian is 18 months old, and my second baby. He’s had a rocky relationship with bath time most of his life. My first baby would splash for what seemed like hours in her little plastic baby bathtub, which I filled in the middle of my own adult tub. She used it well beyond her 3rd birthday, until she transitioned into a shower (with the help of her parents’ washcloth-wielding hands). So when Julian graduated out of the sink and was ready for a bath, we popped him into that same plastic tub. He splashed, he played; all was well at bath time.

Record scratch. Until it wasn’t.

I remember clearly one afternoon, when he was around 15 months old, Julian was sitting in the plastic tub; he was splashing his hands and tilting his head forward. He would look down, almost inquisitively, at the water, then he would yank his head up and laugh. Down he’d bend his head, almost touching the water, then up he’d pull his head and laugh. Down he bent his head again and — blub, blub, blub — into the water went his nose. And when he jerked his head back, he was no longer laughing. He was crying. I quickly calmed him down, and we finished his bath.

But after that day, he cried during his weekly bath time for the next two months.

Where did it all go wrong? Why did my toddler suddenly hate bath time? Did I use the wrong tub? Did I make the water too hot, or too cold? Or did his sudden facial immersion scare the splash-time-fun out of him? Whatever the reason, one thing was certain: He was terrified and Just. Not. Having it.

Why Toddlers Have A Fear Of The Bath

“Toddlers are emotional beings. They feel things strongly and don’t yet have the ability to control their emotions,” says Dr. Tracey Agnese, M.D., an NYC pediatrician and guiding voice on baby and mama care. When I asked her thoughts as to why a toddler might have a fear of the bath, she said there might be several reasons, from the water itself, to its sound, its temperature, to getting droplets on their face. “They could be afraid of going down the drain, getting sucked in there just [like] the water does at the end.” She also acknowledged that the bath might be indicative of an activity to follow: Say you put your baby to sleep after a bath; your baby might not want to go to bed, or want the day to end, she says.

If you can identify the fear, Agnese says, assuaging it is easier. For example, if you’re bathing your toddler in your big bathtub, you can try washing in a smaller tub inside it.

Before each bath time, I’d try different tricks: I made the water cooler, like a summer pool. He still screamed. I tried a slow immersion, first dipping in his little toes, then his ankles; he continued to cry, scream, and kick. I made the water warmer. That got Julian to sit in the lukewarm bath — for about eight seconds. Then he stood up, screamed out, and all but demanded another sponge down.

Toys! If it bobbed, spit or floated, I tossed it in the tub and tried to tempt Julian into playing. I might as well have thrown in a snapping baby alligator for the fit they prompted. But every time he freaked out, I tried not to. Julian’s a sensitive one, perhaps like his mama, and I knew forcing him too hard would either scare him more or make him dig in his heels even harder. I wanted him to trust me, to know that I heard him (loud and clear).

How To Get Your Toddler Comfortable In The Bath

“The best thing to do is try to understand what’s going on in your toddler’s mind so you can address it specifically,” Agnese tells Romper. Your child isn’t trying to give you a hard time — your child is having a hard time, she says. “So be there, be comforting, and try to find ways to make it comfortable.”

As the weeks went on, I tried all my tricks over and over again; each time I’d wind up sponging, towel-drying, then letting him be. After about two months, there came an afternoon when Julian and I went through our routine; the water was lukewarm, his immersion was gentle and slow. He sat. He stayed. I squatted silently, afraid that if I even breathed too loudly, I’d break the spell. I filled a cup with holes at the bottom and let Julian try and grab the streams as they flowed into the tub. He was distracted. I gave the surface a gentle pat and watched as water droplets hit his face. A wail; he looked up at me, betrayed. I grabbed a dry washcloth and said “pat, pat, dab, dab” as I dried his face. He quieted and started playing again.

This gave me an idea. The next bath time, I rolled up a dry washcloth, lowered Julian into the bath, sat him down, and let him start splashing. Whenever any droplets hit his face, he would freeze and threaten tears with his pout. I’d say, “dab, dab,” and dry his face with the washcloth. Each time this happened, he would calm down, take a beat, and continue to play. Realizing keeping his face dry seemed to keep him calm, I started to wash his hair. And when I rinsed, I held the dry washcloth above his brows to keep the water from streaming down into his eyes. It worked! Not a tear was shed.

Our bath times got better after that. I was patient, dabbing his face to keep it dry as I gingerly soaped and shampooed. I still kept the baths short, and if Julian suddenly stood up and wanted out, I forced myself to overlook the suds still clinging to his hair and toweled him off. His trust grew from there.

“Sometimes they just don’t like being told what to do,” Agnese says. “So you can offer choices — not about taking the bath itself, but about things related to the bath.” You can ask an older toddler, “would you like to take a bath before or after dinner?” Or ask if they’d like to bathe with or without a washcloth. If the drain is a problem, Agnese says, drain the tub when your toddler isn’t around.

While the episodes were upsetting, for both of us, I’m hopeful we’ve come to a new understanding. Julian still doesn’t love a bath, but he’ll deal with it — so long as he gets his baby massage afterward.