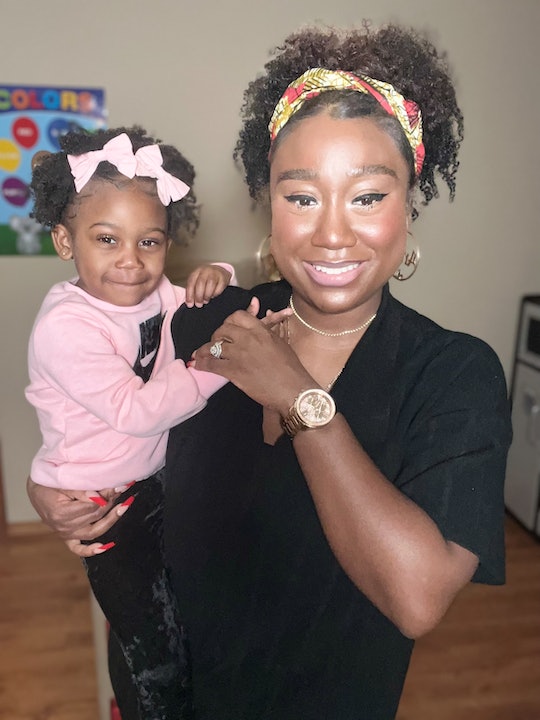 “We all knew that was a light-bulb moment for her.”

We’ll keep repeating this until we are blue and purple in the face. But representation matters in media, especially for our little Black girls. One such little girl in Wichita, Kansas had an adorable, relatable moment when she saw a melanin character wearing a cute bonnet like herself in an episode of Disney Junior’s animated children’s series Rise Up, Sing Out.

Breanna Martin recently shared a TikTok video of her 2-year-old daughter, Seven, watching Rise Up, Sing Out, an animated series of shorts by hip-hop group, The Roots’ Tariq “Black Thought” Trotter and Amir “Questlove” Thompson on Disney+. Rise Up, Sing Out, which premiered back in February during Black History Month, touches on topics like race, racism, and social justice.

In the video, Martin’s daughter was watching the short titled “Super Bonnet,” an episode that celebrates Black girl hair care. Characters Taniya, Shawna, and So-Hyeon taught their friend Amelia about how bonnets are used to protect their curl-textured hair while they sleep.

When Seven saw the characters in their bonnets, the toddler, who was also wearing her purple bonnet in the video, started to bounce up and down in excitement. “This is why representation matters!!! Seven got so excited to wear her bonnet because she seen the other little girls on tv wearing one,” Martin captioned the video on her Instagram. “You could see her reaction was like ‘hey, I have one of those too’ lol. Too cute!””

The bonnet moment was also emotional for Martin, who is also a naturalista. She tells Romper that Seven is learning to love her natural curls by watching her love and embrace her own texture. “I try to make it a Mommy-daughter experience for her and me,” she says of their hair care time. “I sing to her, kiss her cheeks, and try to tell her what step I'm on with her hair. I take pride in Seven's hair, and she knows how much I care for, take care of, and nurture her coils. They are perfect for me!”

Martin added when she first posted the video on her TikTok, people left comments saying they were crying — tears of joy, of course.

“It’s a new day and we embrace brown skin, natural hair, and the total black experience,” Martin wrote on social media. “What did Beyoncé say?! ‘I like my baby heir with baby hairs and Afros.’ And that’s how my baby wear her hair! With her baby hair and Afro.”

Martin’s video has even grabbed the attention of actress and activist Nia Madison Thompson, who voices Taniya and sings the “Super Bonnet” song. As a matter of fact, last week, Seven was the winner of the Super Bonnet social media contest and had an opportunity to go live with the actress on her Instagram.

“She was so excited to be on live with Nia that she was dancing, talking, and smiling,” Martin tells Romper. “Seven was filled with so much joy! Nia did so great with engaging Seven. From a parent’s perspective it was a beautiful moment to witness.”

Beyond Rise Up, Sing Out, Martin says her daughter is emotionally involved with most of the shows she watches on TV. Other shows she likes include Motown Magic, Karma’s World, and Doc McStuffins, all of which have little Black girls as the main character. But this is the first time she witnessed her react so joyfully. And making the moment even more special, Seven’s dad, grandmother, aunt were also there to experience it. Martin says it's one that none of them will forget.

“We all knew that was a light-bulb moment for her — a moment where she reacted to seeing herself on TV — representation,” Martin says. “The moment flooded our living room with love and excitement, watching her come to that realization. We all knew what we were witnessing —this toddler having confidence birthed in her soul by seeing such a perfect level of representation.”