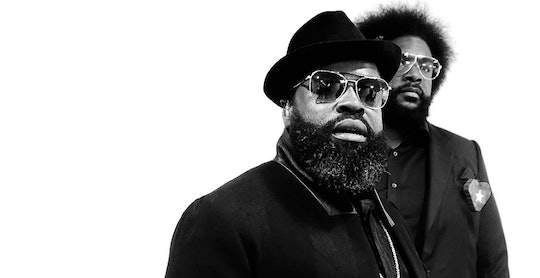 And it will feature music by Questlove and Black Thought from The Roots!

In today’s societal climate, it’s imperative that children are included in conversations on important topics like racism and social justice. But breaking down those conversations in a kid-friendly way can be easier said than done, which is why Disney Junior is releasing a new animated short series called Rise Up, Sing Out later this year.

Rise Up, Sing Out Will Touch On Racial Injustice

Through musical shorts from Ahmir "Questlove" Thompson and Tariq "Black Thought" Trotter, both members of the Grammy-award-winning hip-hop group The Roots, Rise Up, Sing Out will touch on topics such as race, racism, and social justice, Disney Junior shared in a press release on Tuesday. The series also promises to deliver inspiring and empowering messages on diversity and inclusion.

“It is an honor to work with the Disney Junior team to help create a series of shorts that will empower and uplift the future generations in the way we know best, through music,” Thompson and Trotter, who are both executive producers on the show, said in a joint statement. “We hope these shorts will encourage the young audience to recognize and celebrate our differences as human beings while learning the tools to navigate real-world issues of racial injustice.”

Latoya Raveneau, who is also an executive producer and show-runner for the series, called the project a “surreal” experience. “I am beyond excited to finally be able to share this amazing project I've been working on over at Disney Jr,” Raveneau shared on her Instagram page on Tuesday. “This is my first time Show Running and to be able to do so on a project this impactful and personal... talking about race and social justice...with absolute industry titans like @theroots has been SURREAL to say the least.” Raveneau is also working on Disney+’s The Proud Family: Louder and Prouder.

While no release date has been announced at this time, Disney Junior did say the series is slated to air on the network “later this year.”

Disney Junior teamed up with both The Roots and The Conscious Kid, a non-profit organization “dedicated to equity and promoting healthy racial identity development in youth,” for the series. The nonprofit will be consulting on the series and will also help develop a viewing companion guide for parents. Academy Award-winning animation studio Lion Forge Animation, which produced Micheal Cherry’s Hair Love, is also involved with the series.

The Series Hopes To “Open Up” Conversations

Racism and race are still touchy topics that some parents still struggle to discuss with their kids, but the animated series aims hopes it can help start some meaningful conversations. “We recognize that many kids are experiencing a multitude of feelings around what’s happening in our world today and know that many families are struggling with how to discuss sensitive issues around race,” Joe D’Ambrosia, senior vice president of original programming and general manager of Disney Junior, said in a statement. “Our goal with these shorts is to open up the conversation and provide families with the tools and knowledge to address these important topics with their preschoolers in an age-appropriate manner through music and relatable kid experiences.”

Deciding to become anti-racist parents is the first step in opening up that conversation. Also recognizing the power of our voices. Shows like Rise Up, Sing Out is another positive step. More series like these for our children, please!