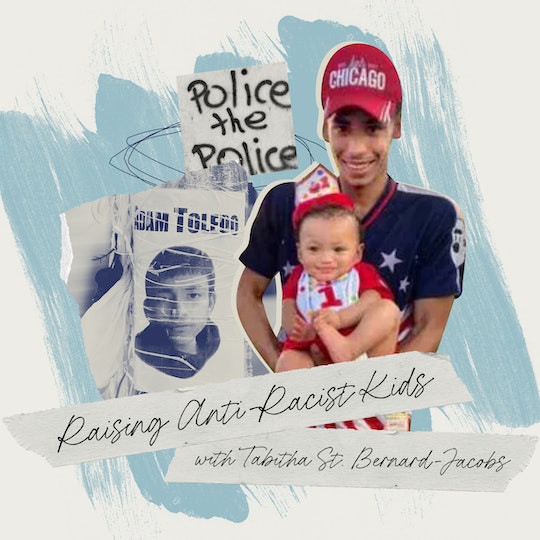 You’re not raising your kids to be kids forever. You’re raising them to be adults who can go into the world and make change.

The past few weeks have been wrought with the type of pain that sits heavy in my body, existing and spanning into all areas of my life. It’s a pain that many Black, Brown and Indigenous people live with. It’s a pain that many mothers live with. I listened to Daunte Wright’s mother recount the horrifying instance of her last conversation with her son moments before he was killed, his humanity laid bare by police who apparently did not see him as a whole person enough to distinguish between a gun and a taser. I did not watch the video of 13-year-old Adam Toledo being killed by police. The image of him, hands up, his body in submission, right before he was shot was difficult enough. I cannot imagine their mothers' pain. It is every parent’s worst nightmare coupled with a nationwide rage at the systemic racism that leaves us in a space where we must live in fear for our lives, for the lives of our children.

I sat with all of this on my own, as a Black mother. Then, I faced my children, two mixed race kids with varying degrees of melanin in their skin but still existing in Black identities and bodies. I thought of what to tell them of Adam and Daunte and so many more. In truth, this is an ongoing conversation. At age 6, my son’s attention span is three minutes, so my partner and I have been making space for these conversations in bite-sized doses applicable to his age. Here are some things that kids must know about these police killings:

“People who are killed by police are whole people.”

When people are killed by police, so often, their characters are dissected and every little thing they did that could point to some guilt on their part is unearthed. Here’s the truth. No one has the authority to take anyone else’s life, no matter what that person has done. Not you. Not me. Not the police. So often, we uplift the person’s perceived innocence and try to prove that they didn’t deserve to die. No one deserves to be killed, no matter what they do. These people are whole people, with good moments, bad moments and everything in between. They are loved. They love. They belong to communities. They have passions and habits and they exist between and in these crevices.

This hyper-vigilance is another form of trauma that, as a Black mom, I carry around with me.

When talking to your kids about police killings, take the time to research the people who were killed and tell your kids about their joy, their life. Resist the urge to echo a one-dimensional view of them at the end of their lives. George Floyd was a father, a partner, a former athlete. Daunte Wright was fresh off a celebration of a new car, a young father who was voted “Class Clown.” Adam Toledo was a sweet and loving child, a fan of zombie movies and Legos. Tell the stories of their lives, not just their deaths.

Adam Toledo’s mom says he was a sweet and loving child, a fan of zombie movies and Legos.Kamil Krzaczynsk/Getty
Breonna Taylor’s sister Ju'Niyah Palmer, poses for a portrait surrounded by photos and paintings of her sister at her mother's apartment. Tell your kids the stories of their lives, not just their deaths.Joshua Lott for The Washington Post via Getty Images
1/2

“Police do not keep people of color safe.”

In Trinidad, I grew up being taught in school and at home to go to the police when in need of help. But that’s not the case anymore. Police do not keep people like me safe and I don’t teach my kids a false narrative about police. I tell my son the truth, in an age appropriate way. I tell him that police treat people with Brown and Black skin in a different way than they treat people with white skin. I teach my son my cell phone number to tell someone if he gets lost. I tell him that if he gets lost, to say in the same spot and I will always be looking for him. It’s tough to teach kids about safety in public without the concept of police and, to be honest, I haven’t figured it all out, yet. I lean instead, on being very cautious when out in public, holding hands, being vigilant and being careful.

This hyper-vigilance is another form of trauma that, as a Black mom, I carry around with me. The truth is that we need a systemic reimagining of safety for all of society. Searching for situational solutions to keep people safe isn’t going to address the need for the type of community safety that addresses poverty, mental illness, physical illness, inequities in education and more. What I do know is that something is fundamentally wrong with the system if it tells us to send our kids who are in danger to people with guns who have unlimited and disproportional power to enforce laws. That’s not a system that works for anyone.

“Racism is part of the system.”

You’re not raising your kids to be kids forever. You’re raising them to be adults who can go into the world and make change.

If you’ve read my column before, you know that I recommend filling your kids’ bookshelves with books about the civil rights movement, the sit-ins, skin color, race and more. Some great ones are Our Skin: A First Conversation About Race, Back Of The Bus, and Sit-In: How Four Friends Stood Up By Sitting Down. Talking to kids about systemic racism isn’t a one-off discussion. Parents need to be intentional about making space for these convos and making sure kids know they can come to you with questions.

We live in a policed state where kids as young as 6 are arrested at school. Black kids are more likely to be disciplined than white kids for the same behavior. If your kid witnesses a fellow student being treated unfairly, they should speak up. As a parent, your first concern may be about your kid also risking getting in trouble. Here’s the truth. You’re not raising your kids to be kids forever. You’re raising them to be adults who can go into the world and make change. Kids should be raised to speak up and speak out, to unite with those who are being treated unfairly. This can be speaking out in the moment. It can also mean going to a trusted teacher and reporting what they witnessed. It must include telling you, the parent. Kids should know that they have the power to make change.

“Let’s work together to change things.”

Kids can make a difference when they see racism and inequities and so can parents. Lead by example by taking a stand in your community, getting involved in different ways to ensure that you’re using the space you take up in this world to stand for what is right. Do these activities with your kids and make it part of the lifestyle of your family. Sign petitions together. Go to rallies together. Write letters to your local newspapers together. Write and call your elected officials together. Let your kids see that you are also intolerant of racism and that whatever you’re asking them to do, you’re doing it yourself. Kids are more likely to follow what you do than what you say.

One of the most important things to remember is that talking to kids about police violence and racism shouldn’t be a one-off occurrence when an incident occurs. Parents need to commit to that internal learning ourselves so that we can understand systemic racism and how it shows up in every area of our lives. The below table is not meant to tell parents what to say but rather to give alternatives to some common approaches to discussions about police violence with kids.

I wish I could say that this period of pain and violence is just a phase but we know that — unless we dismantle the systems that enable police to kill people of color and see no consequences — this is our reality. It’s wise for parents to find ways to talk to our kids early and often about this. For kids of color, especially Black, Brown and Indigenous kids, talking to them about policing and racism is a matter of survival. It’s also a matter of critical importance to raise white kids who are aware of their privilege and how race presents in society to ensure you’re not raising the next Derrick Chauvin, Amy Cooper, or Kim Potter. Finding age-appropriate ways to talk to kids about policing, race, and racism — as well as the actions they need to take — is going to lead us on a path of birthing a new world where policing is no longer a part of life and where community safety is reimagined in a way that keeps all of us safe.

Start researching options to policing. Having questions is OK. Several progressive organizations often hold webinars on this that are very informative for those looking for more information. Join the mailing list of The Movement For Black Lives so you’re notified when one is coming up.