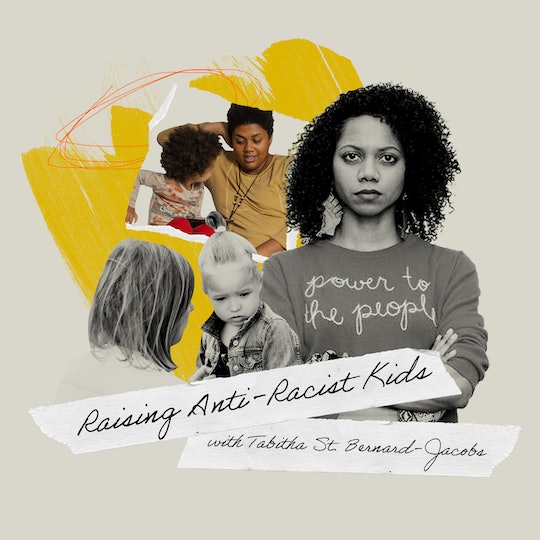 I’m a Black mother and my 5-year-old stumped me with a question recently. He asked me, “If I’m mixed with mom and dad, which half of me is Black and which half of me is white? Is it my head or my feet?” Talking to kids about race is hard. Talking about racism is hard. Many white parents who were activated after George Floyd’s murder or after the attack on Jacob Blake are asking themselves very real questions about how to dismantle racism starting from home and when to have these conversations with their children. I’m here to tell you the hard truth: The answer is now and always.

Change does not always happen incrementally, but in big, overnight leaps, as we have seen through the summer of 2020 (though decades of organizing create the framework for any progress). There exists a whole oeuvre of internet articles specifically explaining how to talk to kids about these issues. The violent death of a Black person compels parents to find a way to talk about police violence and racism, but many of those parents are still waiting until their child is “old enough” or until a “better time” presents itself. This approach simply isn’t going to work. Parents need to talk about race early and often to support kids in fighting racism. Whether your child is a newborn or a 14-year-old, now is the time to talk about race — let me explain why.

Racial biases form at an early age, showing up in studies led by University of Toronto Professor Kang Lee as early as 6 months of age. Lee’s team found that babies show racial preference toward members of their own race and have indicated bias against people of other races. He hypothesizes that a lack of exposure to other races is the main cause — 90% of the people that infants usually interact with are people of their own race — offering the possibility that reducing or mitigating bias in those early months can be done if the parents’ circles are diverse.

The idea of a 'right time' to talk to your kids about race is a symptom of white privilege.

Just last month, a new study from the American Psychological Association (APA) found that waiting too long to talk to your kids about race may actually make it more difficult to correct misconceptions and, even more important, that kids are ready to talk about race long before their parents think they are. Parents believe age 5, on average, is the right time developmentally to have the first conversation about race, but the study shows that kids have the capacity to process social and racial dynamics much earlier than that.

“There is a myth that a parent may damage a child in some way by talking to them about racism,” says Sarah Harris, LMFT, a family therapist and registered play therapist (RPT), who argues that these conversations can in fact heighten kids’ emotional intelligence, build confidence, and encourage critical thinking. Doing so, she adds “models for your child how to have difficult conversations [and] helps to give words for much of what they are already observing in their world.” The idea of a “right time” to talk to your kids about race is a symptom of white privilege. Not only is it a disservice to kids to wait for them to broach the subject while they struggle with these issues internally, but starting these conversations can easily be done.

The first time Niko Bialek, a white parent who is co-parenting with a non-Black POC (person of color), spoke to their child about race was when she was 2 days old. “She was born the Saturday before Martin Luther King Day, and on Monday, my partner put on the ‘I Have a Dream’ speech in the hospital,” Bialek says. “I don't remember exactly what we said to [my baby], but I was glad for the opportunity to tell her what we were fighting for: equity and safety for Black people.”

While watching Black Panther earlier this week, Imani Chapman, an afrolatina parent, found herself discussing one scene in particular with her 6-year-old daughter. As the story in the film goes, the now-exiled royal family of King T'Challa seeks assistance from the Jabari Tribe. Agent Everett Ross (a CIA agent who is white) has accompanied them. Each time he begins to speak, the Jabari begin to bark.

Chapman’s daughter asked, "¿Por qué están haciendo eso?” (Why are they doing that?)

"Porque no quieren que hable y es su lugar." (They don't want him to take up space and it is their home.)

While Chapman did not mention the word Black or white, she knows that her daughter intuited that the dynamic was about race and power. They’ve had enough conversations along these lines for Chapman to know her daughter, upon hearing the words, "It's their place/spot/home," understands they are now talking about a world in which Black people, Black royals, can determine what happens in their environment. And that world is fictional.

Once you commit to anti-racist parenting, there are many windows to talk about race with your children. Some examples are:

This list is by no means exhaustive. Once you start to notice and seek out these opportunities, more will become obvious to you. If none seem apparent, then you have to create them. A fundamental part of this journey is committing to your own internal education and unlearning around racism. It’s an ongoing process because, especially for white parents, there are decades of systemic racism and oppression to address and dismantle.

Dismantling systemic racism with children takes hard work and commitment. The discussions can be difficult and you won’t have all the answers — but don’t shy away. Be prepared to listen without judgment. And, most importantly, be prepared to see it through when it becomes even more difficult or when your life tries to de-prioritize racial justice work. It’s up to you to stick with building an anti-racist home and ensure that you’re raising kids who know that it is their responsibility to dismantle racism not only in the future, but in the here and now.

The Brooklyn Public Library is hosting a workshop for parents on Sunday, Oct. 4, called The ABCs of Racism. Today, commit to making time on your schedule to attend. It’s at 7 p.m. ET, so aim to get the kids to bed early so you can give it your undivided attention.

For more resources on talking to your kids about race and racism, there are actionable steps you can take to start these discussions and lots of guidance available.There are ample resources to provide guidance for you in your family life and lots of tips to get started from a young age.

Previously: How Can Learning Pods Be Equitable? They Can’t.

More Like This
34 Instagram Captions Perfect For Preschool Graduation Photos
From Captions To Gifts, These Are All The Kindergarten Graduation Ideas You Need
Advice For Rihanna On Having A Baby In This Country, From One Black Mom To Another
Anthony Anderson Thanked His Son For Inspiring Him To Finish His College Degree