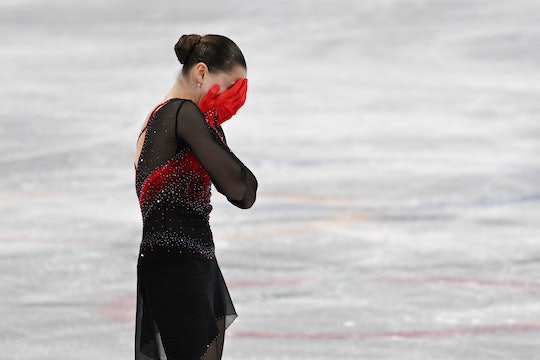 “It makes me angry that the adults around her weren't able to make better decisions and guide her.”

Ahead of the 2022 Winter Olympics in Beijing, 15-year-old Russian skater Kamila Valieva was favored to win the women’s singles. She was the former junior world champion and set two new world records with her triple quad jumps at the 2021 CS Finlandia Trophy. But everything changed for her when it was revealed that she tested positive for a banned substance and, despite a failed drug test, was allowed to compete. Expected, in essence, to skate in front of the entire world with this massive responsibility on her shoulders. And as she struggled with her free skate performance on Thursday, many pointed to the adults in her life and came to the consensus that they absolutely failed the young skater.

On Feb. 10, it was announced that Valieva had tested positive for trimetazidine, a metabolic drug that helps prevent angina attacks and treats vertigo, in December. Attorneys for Valieva had argued that trimetazidine accidentally entered her body through a contaminated product that belonged or had been used by her grandfather, who takes the heart medication. After a brief inquiry, Valieva was deemed a “protected person” because of her age by the Court of Arbitration for Sport, which ruled that she could go on to compete in the women’s short program event on Tuesday and the women’s free skate on Thursday. And if she did win, the court said she would not have been able to have a ceremony to celebrate her medal.

The 15-year-old went on to skate, but did not medal and placed fourth. She struggled and fell, with commentators Tara Lapinski and Johnny Weir, who are normally quite effusive, staying almost silent and terse throughout her performance. It ended in tears for the young skater. And viewers could not help but speak out about how the adults in her life truly failed her on the world stage.

Former Olympic figure skater Adam Rippon took to Twitter to share his disgust at how Kamila was left to carry the weight of this scandal on her own shoulders alone. “This entire situation is heartbreaking,” he tweeted. “This young girl is just 15. She’s a minor. The adults around her have completely failed her. They’ve put her in this awful situation and should be punished.”

Former Olympic skater and NBC commentator Tara Lapinski echoed Rippon’s comment, per People, saying: “I can't imagine how tough this has been on Kamila and it makes me angry that the adults around her weren't able to make better decisions and guide her and be there for her because she's the one now dealing with the consequences and she's just 15 and that's not fair.”

While Lapinski made it clear during her commentating that she did not believe anyone who tests positive for performance-enhancing drugs should be allowed to compete, she added on Twitter, “One more thought. I’ve said this before, she’s just 15. Please keep that in mind. This is a lot for a young person to deal with. I hope that whichever adults faulted her are held ACCOUNTABLE. This is heartbreaking.”

Other social media users were equally upset at how Valieva was left to deal with the situation on her own. “Was it really worth it? putting a 15 year old through a week of hell, letting her skate with the world on her shoulders when she most likely just wanted to go home? f**k everyone involved in kamila valieva's suffering,” @lavienrosefbs tweeted.

Writer and activist Charlotte Clymer echoed that sentiment. “My heart breaks for this young woman,” Clymer tweeted. “She's 15. She has not been treated right by the adults in her life. For whatever you might think of Kamila Valieva being permitted to compete (she definitely should not have been permitted), remember that she's 15. She's a child.”

Kamila Valieva had a laundry list of expectations at her feet.

Finally, skating legend Katarina Witt came to Valieva’s defense, noting that the adults behind the 15-year-old skater should be the ones banned from the sport. “What they knowingly did to her, if true, cannot be surpassed in inhumanity and makes my athlete's heart cry infinitely,” she told Reuters.

The reality appears to be that there are adults silently lurking just on the other side of the rink who face no consequences in this scandal and they did not have to skate in front of a world pointing an accusatory finger at them.

More Like This
You Can Walk Through Barbie's Dreamhouse & Fulfill Your Childhood Dreams This Summer
Parents Who Ran Marathon With 6-Year-Old Share Statement After CPS Visit
14 Children & 1 Teacher Killed In Mass Shooting At Texas Elementary School
What Is Monkeypox & Should You Be Worried? Here’s What You Need To Know