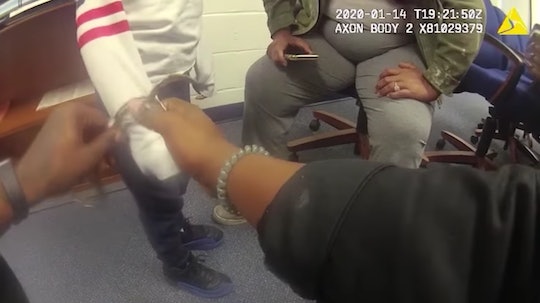 “Today I watched a video that will remain etched in my memory for the rest of my life.”

Police have once again come under scrutiny for how they respond and interact with young children. Body camera footage released Friday by the Montgomery County Police Department showed two Maryland police officers threatening a 5-year-old boy, telling him they hoped his mother would allow them to “beat” him. Officers also repeatedly screamed at the child before handcuffing him and telling him the cuffs would be his “best friend” when he grew up. The boy’s family has filed a lawsuit against the officers involved, the county, and the local board of education, claiming the child suffered extreme emotional distress as a result of the incident.

Montgomery County Police finally released footage of the incident, which happened more than a year ago at East Silver Spring Elementary School in Silver Spring, Maryland, only after local legislators like Montgomery County Councilmember Will Jawando repeatedly demanded video from responding officers’ body cameras be made public. Viewers should be aware the footage depicts a disturbing scene.

“I watched in horror as what can only be described as a nightmare unfolded for nearly an hour. It made me sick,” Jawando said after having viewed the footage. “We all saw a little boy be mocked, degraded, put in the back of a police car, screamed at from the top of an adult police officer’s lungs, inches from his face. This is violence.”

The video begins with officers approaching the child as he stands near a car on what appears to be a residential street. “How old are you? Five?” a male officer asks the child. “You feel like you can make your own decisions huh? You feel like you can do what you want? Are you an adult? Are you 18? So, why are you outside of school?”

As the officers and an unidentified school employee led the child back into his school, an unidentified female voice can be heard saying the boy’s behavior is an example of “why people need to beat their kids.”

When the child begins to cry again, a female officer tells him she hopes she gets to “beat” him. “Shut that noise up, now,” she can be heard saying. “Boy, I’m telling you, I hope your momma let me beat you.” When the child does not stop crying, the female officer leans down and screams repeatedly in his face as a school employee stands nearby.

The two officers can then be heard discussing how they would physically hit the boy if he was their own child, with one officer hinting she would spank him so hard he “couldn’t sit in that chair.” Later one of the officers appears to joke about “crating” the child.

When the child’s mother arrives, one of the officers tells her “we want you to beat him.” When the mother expressed concern that doing so could land her in prison or see her son taken from her, officers told her she would be “applauded” not punished. “We telling you as law enforcement officers in Maryland, [in] Montgomery County in which the school that he goes to [is], you can most definitely,” one officer can be heard saying. “Matter of fact, we applaud the fact that you will please beat your kid.”

Officers then confront the child again, this time with his mother sitting nearby. "When you get older, when you want to make your own decisions, you know what's going to be your best friend? These right here," the male officer can be heard telling the boy while placing one side of a pair of handcuffs on the child. "These are for people who don't want to listen and don't know how to act. Is that how you want to live your life?”

In a statement issued Friday, Jawando rebuked officers for encouraging the child’s mother to beat him and reiterated that such actions are against the law. “To hear law enforcement officers so flagrantly lie about the law to encourage the beating of a child confirms many of the fears people have about law enforcement,” he said. “It infuriates me that I must say this, but let me make it abundantly clear so there’s no room for confusion. Beating your child is against the law in Montgomery County, Maryland, and is fundamentally wrong.”

The Montgomery County Council has said they are “outraged” by officers’ conduct and have said the incident will “inform” upcoming actions the council takes in regards to budget deliberations and legislation.

Montgomery County Executive Marc Elrich said he also found the footage “difficult to watch.” He asked police be given training to help them better separate their own individual feelings on things like parenting or discipline from their duties as an officer. “Our police officers are not social workers, psychologists, or therapists and should not be giving advice or direction on parenting,” Elrich said in a statement.

While the Montgomery County Police Department hasn’t said much about the incident due to pending litigation, the local police union has said they believed the incident “could have been handled better by all involved.” However, the union also noted that “patrol officers do not receive specific training to address events like” this.

According to CBS News, an investigation into the incident has been completed by the Montgomery County Police Department but the findings have not been made public. Both of the officers involved in the incident are reportedly still employed.

In a joint statement, Montgomery County Board of Education President Brenda Wolff and Montgomery County Public School Superintendent Jack Smith acknowledged parents’ expectations that students be cared for and kept safe by school staff. “There is no excuse for adults to ever speak to or threaten a child in this way,” they said. “This incident also underscores the importance of having a team of professionals in all schools to support the diverse needs of our students.”

They noted they had since asked leaders within Montgomery County Public Schools to clearly communicate the approved procedures and structures for student intervention and support to all staff members.

In January, the child’s mother filed a lawsuit against the responding officers as well as Montgomery County and the Montgomery County Board of Education, alleging their actions were “malicious, grossly negligent, reckless and in deliberate disregard of the emotional stress it would inflict on the child,” ABC News reported court documents said. The lawsuit alleged the incident caused the child severe emotional distress.

"Our client, Shanta Grant, brought this lawsuit on behalf of her then 5-year old son in an effort to get justice and fair compensation for the trauma he endured,” Matthew Bennett and James Papirmeister, attorneys for the child’s mother, said in a statement to ABC News. “She also hopes that the incident will lead to changes in policy and training, both with the school and the police.”

Unfortunately, this isn’t the first time police officers have been accused of being overly aggressive in their dealings with a child. In February 2020, law enforcement officers in Rochester, New York, pepper-sprayed a 9-year-old girl while she was in handcuffs and experiencing a mental health crisis. The year before, police in Orlando, Florida, arrested a 6-year-old girl and placed her in zip-tie handcuffs. This latest incident further fuels national conversations regarding police conduct, training, and policies for handling young children.