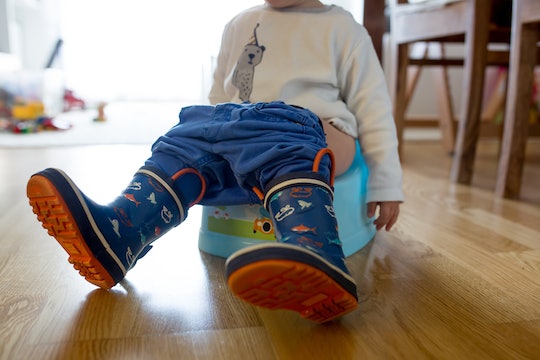 "I think if you’re in charge of the kids you should be teaching them manners and speech and potty training them."

Folks on Reddit are not terribly impressed with a dad who yelled at his babysitter over potty training his twins. In a post shared on the the popular sub-Reddit forum Am I The A**hole, Reddit user u/twintwinstwin asked for opinions about whether he was in the wrong for expecting his college-aged babysitter to help potty train their toddler twins and blowing up at her over the lack of progress that had been made.

In his post, u/twintwinstwin explained that he and his wife recently returned to work outside the home and have left a young woman in charge of caring for their twins, who he describes as "quite a handful." "They have speech delay, don’t really listen, and aren’t potty trained. I tend to just give in to avoid their crying and tantrums," he wrote. "My wife believes discipline will help but it just leads to more tears and no progress."

The couple apparently told their babysitter they wanted her to work with the twins on potty training and talking. "While she definitely takes good care of the kids... there’s no improvement," the dad added.

Everything apparently came to a head recently when he arrived home from work to find his kids crying. "The sitter told me that one of them had ripped her clothes off and gone to the bathroom on the floor during nap time and I lost my temper and told her that that wouldn’t have happened if she had worked with the kids the way she should have," he wrote. "I told her that I expected the kids to have been progressing more by now."

The babysitter left soon after and texted the mom to apologize. The man's wife, however, disagreed with his approach. "My wife is PISSED," he wrote. "She said it isn’t a college students problem to raise our kids, she’s here to watch them and add on to what we build as parents."

"While I understand they are our kids I don’t think my wife is right," the dad added. "I think if you’re in charge of the kids you should be teaching them manners and speech and potty training them."

Dad got upset at sitter over potty training twins.

Some Reddit users were blunt in their response that he was, indeed, the a**hole in this situation. "This must be a joke," one Reddit user commented. "Potty training is YOUR JOB and they might not be ready. Speech delays? Get them professional help. If you seriously want to outsource those duties you need to pay someone with loads of experience and not a college kid. You sound like a nightmare and I sure hope college kid quits on you like yesterday."

Another Redditor who says they are a full-time nanny explained that potty training is not in the job description. "It is no sitters/nannys job to be the parent. We are hired to ensure a [child's] safety, feed them, change them if necessary, and do the necessities required of us," they commented. "We are NOT responsible for parenting your children, do not put that on anyone besides yourself, especially not a college student."

One more Reddit user also noted that the original poster needed to do his part to raise his own children. "You need to step up as a parent and teach them it is not your sitters role to teach them everything and improve," they chimed in. "If you wanted that you would hire and pay triple that to a special needs assistant. YTA how dare you scream at her for something you have already given up on, it is your role as a parent to fulfill that duty."

Almost across the board, Redditors condemned this father for being out of line. Not simply because it was not the sitter's job to potty train his twins, but also for yelling at an employee.

The reality is that potty training just one child is difficult enough, let alone twins. Then there's the age issue, with some kids not ready to be potty trained until they're at least 3 years old. It's a big step for kids. And one that requires more than just a few hours a day being monitored by their babysitter.